Is it possible to modify the device handler so that double-tap up immediately turns the light on at 100% brightness? I tried, but was unsuccessful. I know this can be accomplished via SmartApps, but I don’t want to create an instance for every single dimmer switch.

Is it possible to modify the device handler so that double-tap up immediately turns the light on at 100% brightness? I tried, but was unsuccessful. I know this can be accomplished via SmartApps, but I don’t want to create an instance for every single dimmer switch.

Yes, I can throw that it as a preference option when I add the native firmware dim rate config preferences. It seems to be a fairly common use case.

If you’ve updated your WS100+ device handler from a previous version vs. removing and re-pairing the switch, you may need to hit the refresh button for the attribute setting to take. Can you give that a try and re-check in CoRE? If that doesn’t help, I’ll do some testing here and see if I can trigger the issue.

Refreshing it worked, thank you, one of these days I’ll have all my rules moved to CoRE

Is it possible to modify the device handler so that double-tap up immediately turns the light on at 100% brightness?

Not sure if it is possible, but I am trying to get the lights to turn on at set level as close to instant as possible both with remote and local actions.

I’ve updated the WD100+ Device Handler to provide a preference option for double-tap to turn on the light to full brightness. Great suggestion @DennisY. This was a simple change to the device handler and I really like the feature - and that a smart app is not required for this.

I also added preference settings to modify the switch configuration for ramp rates for local and remote actions. For the remote ramp rate configuration, your switch firmware will need to be at least at V5.14. Setting a dim level per duration of 99 will provide a close to instantaneous ramp-up.

I ended up removing the previous workaround to control the remote dim rate in the device handler since it can now be controlled via device config with the new firmware. Unfortunately, this means for those still on older <5.14 firmware there is no longer an option for remote ramp rate configuration. If you need this capability on the older firmware, the old device handler code is still available. I was trying to reduce the DH complexity for maintainability, but please let me know if this causes heartache for anyone still on older firmware versions.

It’s not 100% tested, so please let me know if there are any issues.

Sweet… will try when I get home later today.

thanks for the update!

Everything seems to be working great. Double tap up gives me almost instantaneous full brightness and all the other tap options also appear to be working as well. Great job on this! Thanks

Hi! I just received some Homeseer dimming switches and am trying to turn all my switches to the dimmers. I’m working with the smartthings hub and I’m trying to find a device handler that will allow me to single tap to turn the light on to previous dim level, double tap to turn two switches on(or a routine), and three taps to turn all the switches on(or routine). Is there anyone that can help me find a device handler to do such a thing?

I don’t know what to say, this Device Handler and HomeSeer HS-WD100+ Device is crazy good… Could probably use it to replace of my ZWN-SC7 Enerwave 7 Button Scene Controller for certain applications… It setup flawless after I preloaded the code from: https://github.com/DarwinsDen/SmartThingsPublic/blob/master/devicetypes/darwinsden/wd100-dimmer.src/wd100-dimmer.groovy

I’m sure the HomeSeer HS-WS100+ Switch is just as great… If you want to improve functionality of your system with double and triple taps, these are your devices. Seems much more consistent if the double/triple tap commands are device generated vs a smart-app trying to interpret them like the DoubleTap Smartapp.

In summary, the switch lets me configure a room or more to perform magic off a single dimmer switch. I originally wanted to automate a single switch controlling a fan and light combo fixture, to my amazement the fan industry is far behind on home automation. But by replacing my current single dumb switch with a HS-WD100+, I am able to control my fans light and fan speed via the wall, mobile app or smart apps. The kicker is I can also control (toggle) the 3 other lights in the room with the double and triple tap combinations, I use the 4th option (triple down) to kill then entire room. The double and triple tap is great cause it allows you to get 4 toggle type combinations (can then control the fan off it or other lights in the room). The Dimmer combined with a GE 12730 3-Speed Fan Controller (stuffed in the fan shroud) can resolve the single gang problem for light/fan combo units, can’t find a module type fully supported yet.

Only hope ST gets these devices on the white list to take advantage of V2 Local processing, need this device type to be on the main ST list…

This device type allows it, but you also need to setup ST’s SmartLights SmartApp in the SmartApps Tab of the Marketplace (Lights & Switches sub category):

There are a few other smartapps out there to do it too, but you need to setup your device first with the above handler and then setup your buttons with a smartapp.

After reading some complaints about various dimmers, I grabbed my VRMX1, a 5 pack of HomeSeer WD-100, and a three pack of Dragon Tech WD-100 and decided to to do some experimentation. Near as I can tell, they all report at the same speed back to SmartThings.

Also, The current 2016 Dragon Tech switches that Zwaveproducts is selling has exactly the same capabilities as the switch HomeSeer is selling. Check out the screenshot below from HomeSeer. The switches both even have the same build date code of 1631 on them.

[Album] Imgur: The magic of the Internet 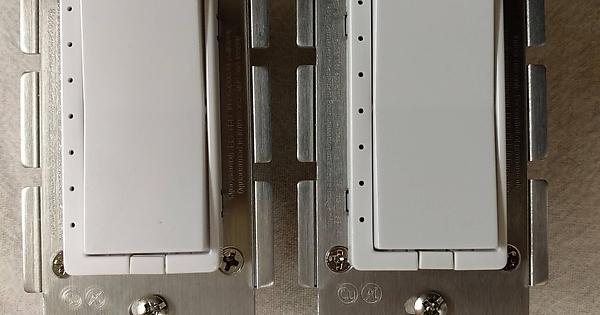 Just be careful where you get your Dragon Tech switches from, you don’t want to accidentally end up with an old version. Right now all the switches are shipping with firmware version 5.14 which is working great, but Homeseer will be eventually releasing 5.15. It is supposed to add direct association support which might be useful depending on your situation. Who knows if or when the Dragon Techs will be able to be re-flashed to newer versions.

As of right now, I give both the Dragon Tech and the Homeseer dimmers a big thumbs up. I’ve got no dimming problems using them with my Phillips bulbs, and they are very quick to report back to smart things, and respond to requests quickly. Just remember, with Dragon Tech you are pretty much on your own. Homeseer is a few bucks more but has very good support and actual warranty service.

Thanks for the info

Do you have any actually installed?

Could you get a distance photo showing the switch dimmed to 50%.? I am assuming that the lights on the side of the switch light up showing dim amount. Is this true?

Yeah, the white LEDs on the side show the brightness the switch is set to. You can see what they look like in the video I posted above. Just keep in mind the white LEDs look harsher in videos and photos than they do in real life, I don’t find the indicators overly bright in person.

Edit: Note: The LED indicators cannot be disabled, well, not without covering them up or something.

I had 4 older phillips bulbs that were 11 watt 880 lumen (right side of picture) that exhibited poor dimming range and popping on with the dimmers (no flashing). The rest of my bulbs are the 9.5w 60 watt 800 lumen bulbs which work great (left side of picture).

The 9.5 watt phillips bulbs have the best dimming support according to HomeSeer, so I guess I shouldn’t be surprised. Luckily they are down to $1.50 a pop at the local Home Depot so I’ll grab a few more to replace my older bulbs. 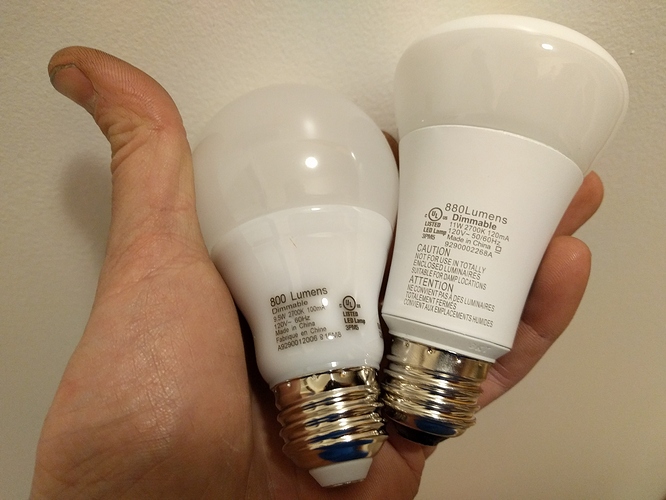 I’ve got another 3 Dimmers on order which should almost finish up this project.

New guy here. I just bought the hub a couple weeks ago and a couple of HomeSeer HS-WD100+ to start out, as the light switch locations in my house are terrible.
It took a little while to figure out, but I got the Device Handler from @Darwin published/installed/working. I’ve set up both lights to turn on and off from double clicking, and that works great, but the one thing I can’t figure out is getting the LED lights on the switch to be on while the light is off.

Currently the LEDs light up to indicate the brightness/dim level, which is great, I like that. But I’d like there to be some light coming from the switch when the room is dark. I thought I read that that was possible, but I can’t seem to figure out what I need to change and where.

but the one thing I can’t figure out is getting the LED lights on the switch to be on while the light is off. 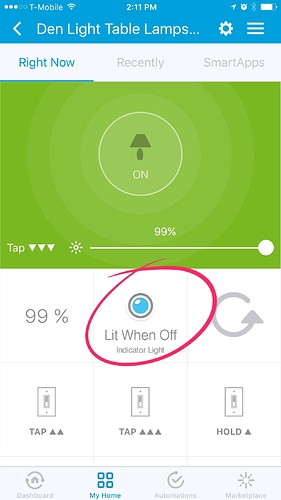 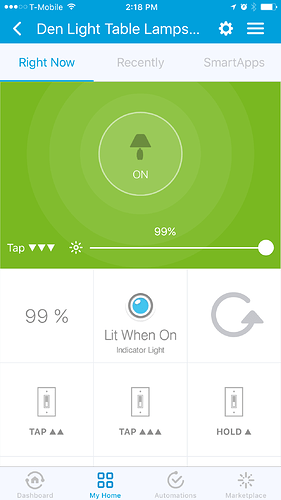 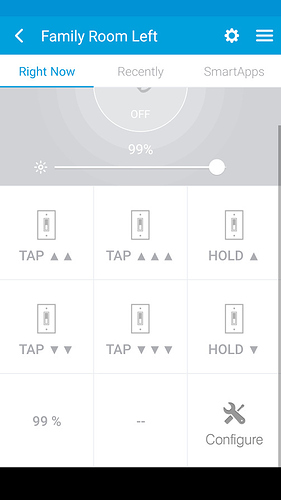 Yes, The switches are using the central scene commanf set which sends the information to the hub which then sends a command to the end device. So they can be used as a button controller in that sense as long as the other switches are known devices to SmartThings. If the other devices are not networked (like the GE add on switches) then it wouldn’t work.