so now my fallback is to stuff the receiver into the box like @TrueFlaNative1957 did (without the slick tablet interface, for now). That’s a project for another weekend though.

Once it had occurred to me to go this way I couldn’t let the idea go so it turned into an evening project instead of a weekend project. It turns out a 3 gang box is just the right size for the receiver, and it even fit on top of the giant bundle of neutrals passing through the box (1 feed in, 4 out). Of course, I couldn’t sync it up to SmartThings with last night’s outage, but at least the remote works.

You can watch the forums here and wait for them to come back into stock. It looks like they show back up every couple months but sell out very quickly. I missed them several times. I have waited almost 6 months and someone else was waiting for a year until they finally got a couple last time around. You can also ask Home Depot to email you when they come into stock but that wasn’t all that reliable for me.

If you don’t want to wait, then you can order the repair parts from KOF. See this thread: Hampton Bay Zigbee Fan controller

Those are the only 2 options if you are looking to automate your fan in this way. Unless your fan is very close to your hub, you will probably also need to make sure that you have a hardwired zigbee device close by to act as a repeater too.

I ran into an issue with my Harbor Breeze fan. It didn’t have a blue light wire coming out the top, just motor load, motor neutral, and bare ground. It had the capacitive control as well so I had to give up. Can you tell me the model # of your hunter fan? I have two of these King of Fans receivers and no compatible fan

Actually that’s an open invite to anyone: Who has a fan model for me that they’ve had plug and play success with using the MR101Z

Can you tell me the model # of your hunter fan?

Can’t find the model number on the outside - I didn’t buy it, and the installation manual I thought was for this must be for the extra fan I have waiting to go in one of the kids’ rooms. I can’t find an exact match on the Hunter web site (it’s probably close to 10 years old) but it looks approximately like this one: 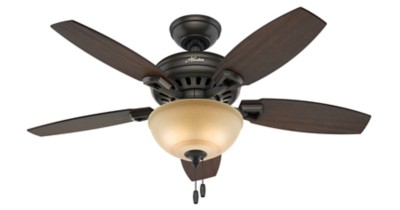 The Holden is a small-room fan that moves a lot of air. The 44-inch blade span is ideal for smaller spaces, and the energy-efficient lighting will brighten up your day. This fan's casual style is flexible enough to match almost any dé:cor....

Give a modern look to your home by installing this Home Decorators Collection Tuxford LED indoor Brushed Nickel Ceiling Fan.

This fan uses a receiver that is 99% identical to the KoF wink device. It’s only missing the zigbee antenna. The fan speed settings are the same as the gardinier equivalent and the remote is identical. I ordered one and it’ll be here Thursday. I’ll see if it’s just a simple swap of the original receiver and the smart one and report back. High hopes!

They work with the fan controller and uses RF. Once you click a button, it is reflected in smartthings

No. they are RF controllers

I’ll see if it’s just a simple swap of the original receiver and the smart one and report back.

You can also ask Home Depot to email you when they come into stock but that wasn’t all that reliable for me.

Based on some of the responses in related threads, HD hasn’t been sending out those email reports.

I ran into an issue with my Harbor Breeze fan. It didn’t have a blue light wire coming out the top, just motor load, motor neutral, and bare ground. It had the capacitive control as well so I had to give up.

Wait… Does your fan have a light? Is there no way to bypass the capacitor? I had to remove the power limiter (different device, I know) from my ceiling fan because it wasn’t working anymore. Wasn’t planning on putting any high wattage bulbs in my light anyways.

Yes it has a light. It also has the power limiter. When I used the smart receiver it would only control the light, not the fan. I tried a bypass module someone recommended but the pin out didn’t line up right and the cable coloring was different.

First thank all of you for the work you have put into this effort! I have certainly caught the home automation bug.

I have one issue that I want to see has been replicated by others in the field.

Issue: If I use the remote with the model 99432 kit the dimming function on the fan LED stops working in ST, the light will come on and turn off but only at 100%. If I remove the device from ST and conduct a fanctory reset (on/off 5 times) and re-pair the fan to ST, the dimming function works again. I have repeated this failure mode twice.

Has anyone else seen this behavior? I was planning on buying the wall controll but I don’t want to spend the money if it means losing dimming function in ST.

Thank you so much, that did it!

Yes, it essentially turns the dimmer on or off. Took me awhile to figure that out, too.

4 Speed Ceiling Fan Thermostat - ZigBee
I’m either not understanding the instructions or my use case is not valid.

What I’m trying to do is have the fan

My use case… The fan is off, the motion/temp sensor is reading 70 , the room set point is 69 and the “Turn off ceiling fan thermostat when there has been no motion for …” is set to 1min.

Shouldn’t the fan “turn off” after my period of no motion?

I’ve had 2 of these installed for 3-4 weeks now. I put an outlet as a repeater in the room above Fan 1, it paired immediately and worked smoothly. Control has been a pain, my family regularly turns it off at the hardwired switch which I haven’t gotten around to replacing yet. As of this past Thursday, Fan 1 is unresponsive to ST control, although it was still listed as Active in the IDE (last activity 4 days ago). Resetting the controller through the now-convenient wall switch is not working - I never get a blinking signal that it’s reset. Sounds similar to @PaulChampagne’s experience except that mine doesn’t rejoin the network. I’ve now removed it from ST to try to get it to re-pair and I can’t get it back in. Anything else to try before I call customer service?

I wanted to give you feed back on the blinking of the factory reset. I have installed three fans. Two fans are on the same switch in series. I decided to change the fan names and with all the issues that can arise with parent / child relationships I decided to delete and reinstall. Much to my chagrin I did not get the blinking behavior like I did on my upstairs fan during the factory reset procedure (off/on five times). It was only when I implemented the pairing process from ST that the light started to blink and I was able to pair. I have no explanation for why. This was not the behavior of my upstairs fan.
So the differences between my single upstairs fan (which always seems to factory reset without issue) and downstairs is the fact that in one case I have two fans in series on a single switch.

Not that it makes a difference but I wanted to also let you know that I am using the 4 speed thermostat. I have no issues other than it does not seem to turn the fans off with inactivity of the motion sensor. I’m currently using a ST sensor and I’m thinking of trying another brand as an experiment to see if there are compatibility issues.

Note to implement the factory reset requires removal of power either at the switch or the breaker. Simply turning the fan on&off at the remote will not work

One last thing… when I initially installed I had some issues. I deleted the initial install of SW and hardware and reinstalled SW first and then the hardware. This made a BIG difference in behavior.

I hope this helps

Just providing you some data

Did you need a Zigbee repeater for this to work properly? I have all Z-Wave devices in my home and want something to work nicely with our ceiling fan.

Did you need a Zigbee repeater for this to work properly? I have all Z-Wave devices in my home and want something to work nicely with our ceiling fan.