I recently moved all my devices to edge.
Everything was working fairly smooth - minus one driver for a water sensor.

Using Smarthings CLI - I was messing around with a couple of driver choices.
What I found was, it appeared my Smart Phone (iPhone 14 Pro - iOS 16.2) was “Caching” the previous driver settings. For example, one driver had temp - one did not, but flipping would leave a ghost capability. But… Only on the phone. Alexa and Homebridge updated.

So, I decided to try and clear my “app cache” by logging out of the app and removing it from my phone. Then I reinstalled.

However, now… Nothing connects. Every single device shows “Can’t connect to device, Check device and try again” I have checked IDE and CLI - everything is online. Devices work via Alexa and HomeBridge… It’s only this one phone and this app.

Has anyone ran into this before?

what happens if you login to my.smartthings.com … do they load there?

what happens if you login to my.smartthings.com … do they load there? 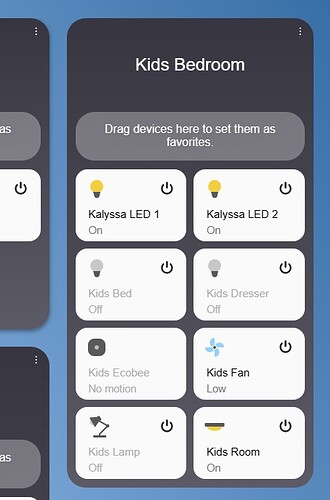 so, the driver is causing an issue with the app. not surprised… it happens with the Android app but never seen it with the iOS app (just means I have not seen any posts on it before). You may want to focus on the last devices you were modifying in CLI. Any of them multi tile devices?

but I could be totally wrong as I don’t know.

but I could be totally wrong as I don’t know.

OK, I believe I am tracing this down…

I shut down my pi-hole and everything connected.
There must be a handshake at log in that once it is established isn’t needed anymore - as everything was fine before I logged out.

Thank you for such an active presence here - especially in this crazy time with Edge.

So this appears to be the culprit: