You can use the presence of your wife’s cell phone to know she’s home already and only turn the music on when you arrive home and the house is empty.

You can use the presence of your wife’s cell phone to know she’s home already and only turn the music on when you arrive home and the house is empty.

Yea I was thinking about that but the phone presence detection is random at best. I have watched my phone have me leaving and returning to my home while I was sitting on my couch.

Yea, ST gives you the ability to make decisions about what activities to fire up and when/why.
You may have to get your hands a little dirty by writing a smart app for your use case, if you can’t find a stock one to fit the bill.
For me currently I have the following setup:
–An arduino/thing shield which controls a ceiling mounted lift for my 84" 4K set, this is federated into Harmony via three momentary virtual switches (high, mid and low), these switches are then included in the relevant harmony activities to position the TV
–I have another virtual switch (representing my audio rack) that harmony controls, it’s used on the ST side to prevent the house going to sleep while it’s "on"
Nothing exciting really, I’m going to do the music for me when I get home thing, that’s pretty much a no brainier using stock apps, just haven’t gotten to it…

Forgot to mention that I want to learn my AC split system codes on the harmony and perhaps control that from the ST also.

Yea I was thinking about that but the phone presence detection is random at best. I have watched my phone have me leaving and returning to my home while I was sitting on my couch.

I use life360 for presence, it’s not without it’s occasional issues, maybe once a month someone’s not where they’re supposed to be. Last week I was transported from Seattle to Portland and back in a 30 minute period, but that issue was on the 360 side. GPS must be on all the time BTW to have any hope of it working, no matter the provider or the cell OS.

I use life360 for presence, it’s not without it’s occasional issues, maybe once a month someone’s not where they’re supposed to be. Last week I was transported from Seattle to Portland and back in a 30 minute period, but that issue was on the 360 side. GPS must be on all the time BTW to have any hope of it working, no matter the provider or the cell OS.

Cool I will try it. Strangely my HTC One GPS has started jumping me all over the place in the last three days. I think I have a hardware issue but not sure yet. So I might have an issue there. I also ordered a ST presence sensor. If it works well I plan to get another and place it in my Wife’s car so I know when she’s home. Should work for this purpose.

I haven’t tried it but isn’t there some way to indicate presence by noting that the MAC address of the wife’s phone is pingable on the local wifi?

technically sure, smartapp for it? no…

I’ll see if we can a beta out for those who are in limbo. From talking to our engineer, we may be able to get it out quicker but it’ll still have to go through certification and mutual review (which often is just as long as development). I just didn’t want to promise you a shorter timeframe and not be able to deliver because it’s on hold because of review. I rather surprise you with a quicker turn around if we can get it to happen

@thegibertchan Has there been any progress made on this one??

An update on this would be great as well @thegibertchan.

I have a un-opened Smart Home Control waiting for me at home that I will return if integration still seems to be a ways off.

As a side note, I remember when they announced that they would be rolling out a firmware update to the existing Smart Control devices later in the year (this was 2014). Companies really need to learn to stop promising these vague dates, all it does is damage their reputation. I appreciate the new approach for the SmartHub V2.0, just release the product when its ready!

Yea I just got a ST hub and Harmony Home control. Getting a unexpected error when trying to add devices to the harmony, and it won’t find the harmony in the ST controlling harmony app.

For what its worth, I’ve had a Home Control since about mid last year and its been pretty solid for me. I echo Mike’s observations in that you can only really trigger scenes from it. This is super limiting but it does work reliably for me. It might not be worth the money, but that’s a different topic.

Yea I got the Harmony-> ST working, but not the ST->Harmony working.

When I go to install the app, my hub does not come up in the list, and it never says that discovery has started. It would just be nice to get my motion sensor hooked up to my tv.

I wanted to give you all a quick update on where we are.

We did a preliminary integration using their cloud API. We need to make some modifications so that it has parity to our previous LAN integration.

As of now, only Home family of the Harmony Hubs are supported. My hope is that we’ll support all Harmony that uses the their hub.

Lastly, did you know that if you configured the SmartThings integration from the Harmony App, you are able to incorporate ST sensors into your activities? This allows you to fire Harmony activities through the Harmony Platform. I’m working out some issues with my Harmony remote access but if this works, this will give you the same capabilities that we’re working through.
Let me know if anyone has been using this method.
I’ve included a few screens on setting this up (don’t laugh about my multi-sensor in our vanity, it works wonders). 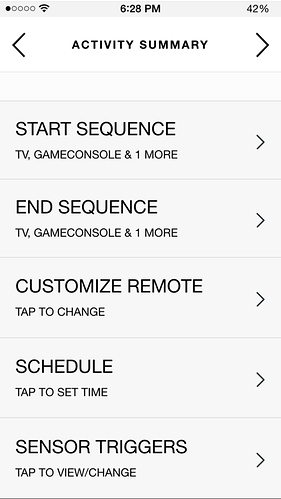 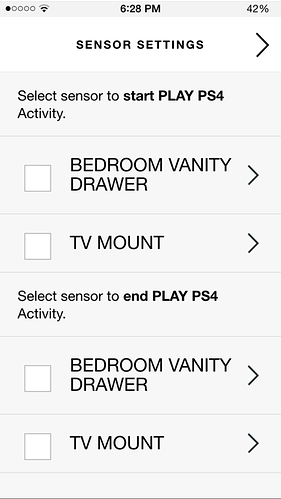 @thegibertchan out of curiosity, were you able to fix it so that home automation could be done before entertainment devices in the activity sequence?

@thegibertchan thanks for the update and hard work. Once my Harmony integration started mostly working a few months back, I was able setup sensors to trigger actions. I have my TV & DVR power down if no motion in the family room for a while. 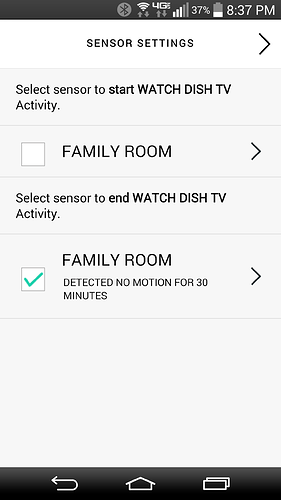 For Hello Home phrases and other triggers, I had to setup virtual switches. So at this point mostly using turn on "TV Off "virtual switch on Goodbye to shut down media/TV equipment (kids leave stuff on, cats trigger motion sensor and prevent the “no motion” TV off configured in the screenshot above from happening), then some other rules to reset TV Off switch back to off for the next use. It would be great to be able to trigger Actions from Hello Home phrases without having to create virtual switches.

It’s been a few months since I tried to configure anything with Harmon and ST, so apologies if I’m rusty on current options.

Is ST -> Harmony integration working again? I can discover the hub now, but I get a device aut error when I try to move through to the next page. Harmony to ST works fine, but the delay is fairy significant.

How is the progress? Any update?