Good luck! I hope you have a Zigbee Repeater (e.g. a Zigbee outlet) in the same room as the fan. It is the only way the Hampton Bay Fan Controller can stay paired properly to your hub.

Make sure you don’t pinch the antenna. Snip a hole in the cowl to pass the wire through.

My setup has been rock solid since install a few months ago. I have a ST zigbee outlet in the same room, and the hub is about 15 feet away (albeit downstairs so the signal passes through the floor).

I did make sure that the wires weren’t pinched, and that they were visible after installing the cowling

which one the long black one or the short stubby white one?

The stubby white one is the Zigbee antenna. The black wire one is for the RF remote that comes with the HBFC kit.

This is how mine looks.

Get some tin snips and clip a small piece out of the top.

I am not sure if it has been brought up before. I have also found that if you have your hub setup to require secure rejoin. The fan controller seems to have problems periodically. It is only fixed by cutting power to the fan and then restoring it. After i enabled unsecure rejoin my fan controller reliability has gone up allot.

Thanks for this info. I tend to agree. My setup with 3 fan controllers has now worked flawlessly for over a month after I turned on the hub setting to “Enable Insecure Rejoin”. When that option was turned off, my bedroom controller dropped regularly and stopped responding, requiring power cycling and re-pairing and setup, etc.

I have a couple of 20 year old Casblanca fans that use an in-wall controller (W-32 ) that communicate with electronics in the fan housing to provide several fan speeds (4+?), light on/off, and reverse of the fan. Unfortunately, both decided to die this fall - probably some sort of power spike that took them both out at the same time. The Casablanca controller has been discontinued and direct replacement parts are not available. There is retrofit kit available which uses a newer, but still discontinued, Casablanca controller, but it is $180 and has no external control functionality (thus not SmartThings compatible) so I decided to try to see if I could get the Hampton Bay controller to work. I took one of them down from the ceiling (blades off) and took it apart. I removed the old electronics module and discovered that it took in line (hot and neutral), had two wires to the bulbs, and 3 wires to the fan. I installed the Hampton Bay Zigbee module inside of the housing with the two antennas sticking out the top (wife didn’t seem to mind them sticking out, capped off the lighting wires and connected line/neutral to input of receiver and connected the three output wires of the receiver (white, black, blue) to the three wires of the fan (white, black brown). I then bypassed the wall controller to just send AC to the fan. The fan does work with the Hampton Bay controller although there are some idiosyncrasies. It connected just fine to my SmartThings Hub v2 using the KOF device handler (it is my only Zigbee device). I did the discovery with the receiver only a few feet from the hub uwing a temporary power cord and communication seems to be fairly reliable after it was installed even though they are on different floors. It is pretty much straight above my hub, though, so only about 15-20 feet apart through a floor and a bed.

The idiosyncrasies are that the ‘light’ seems to need to track the state of the fan to be for the fan to work (there is no light in the fan at this time). The fan won’t start up if the light is off and if the light is on with the fan off, the motor makes a humming sound. Even with the light on, the fan won’t start up on the High setting. The highest speed is Med-Hi followed by Med, Low, and High being the lowest speed. But the High setting with fan on hums similarly to the light on with fan off. There seems to be no way to reverse the fan, which would be nice but isn’t a must. Reversing the non-white connections between the receiver and the fan did reverse the direction, so I just installed it with those wires connected to drive the fan the direction that we like it.

Luckily, the on/off on the remote turns the light on with the fan and goes back to the last setting, so it is really fairly usable with the remote.

But after thinking about this some more, I wondered how the receiver controls the light in a ‘normal’ installation? Does one of the black/blue wires control the fan and the other the light? The installation instructions not discuss how to wire the receiver at all - they just say route the line wires (AAA) to one side and the fan wires (BBB) to the other side. The installation as I have it is usable, but not ideal. I wish I had experimented more with the wiring before I did the final install to see if the fan would work with only two wires connected.

Has anyone figured out what each wire on the output side of the receiver do? I assume that white is neutral, but the purpose of the other two seems unclear. Thinking about it now, it seems likely that one is for the fan and the other is for the light, which might also explain the idiosyncrasies that I found, with my three fan wires being neutral and one for powering each fan direction. If someone can verify that, I will experiment some more to see if I can get it to work better and maybe even power the light.

This doesn’t sound right. The Hampton Bay instructions don’t seem to define it well, as you noted, but the three wires out of the controller should be neutral, load-light (I think this is blue?) and load-fan (probably black). Your fan appears to have a different wiring configuration - perhaps as you say this has to do with reversing the direction but it’s not obvious…

Success! I was able to verify that the blue wire from the BBB bundle of the receiver is load-light and the black wire from the BBB bundle of the receiver is load-fan. But the fan wouldn’t start up when I connected the load-fan wire to either the brown or red (I had said black in my initial post) wire from the fan motor. So I did a bit of research and decided it was likely that the fan needed a start-up capacitor so I salvaged a 10 uF cap from the old controller board and connected it between brown and red. Voila! The fan works as it is supposed to with all 4 speeds and no dependency on the light. I also added a SPDT switch on the top of the fan so I can reverse the direction if I really want to. So I deem this project a full success and will order the wall control and another set of Wink remote and wall control for the other non-working fan I have just like the one I fixed.

Here are some pictures:

Anyway to force this controller to drop below 20%? Looks like that’s the lowest setting.

Not that I have found

Do you have these for sale somewhere?

Any chance you could walk me through adding a device handler?

I copied this code

into what I believe is a new device handler in my smart things. I am so lost what to do next.

This may help if you’re new to using custom code on SmartThings.

I recently bought a zigbee antenna to replace the one I accidently cut on my hampton bay module. I installed it this morning and so far the controller has been working like a champ. I am wondering if the new antenna has helped my range. It has only been 1 day so far but, so far so good. May be a cheap way to improve the performance by replacing the antenna. It has a standardized plugin connection so it is very easy to do. Its quite large so I may buy a stubbier one to hide it more. 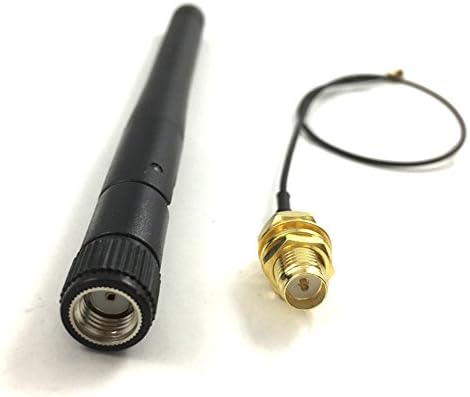