So you’ve been in communication with GE about it? There’s hope that it might be fixed? Should I hold off on selling all my GE Link bulbs? Serious questions…

Also, will we be able to update the bulbs through the ST hub?

Sorry to blast you with questions but you are literally the only person on the planet that’s willing to talk about the problem, other than between customers.

I haven’t talked to GE directly about this issue, but I’ve spoken with someone who has. They are aware of the issue and it seems to be fixable over the air. If you can live with the pain for a few more months I’d say to keep them.

Our hub does not yet support ZigBee OTA updates, but we’re working to quickly add this functionality exactly for these reasons.

Good enough for me! Thank you @Tyler!!

This happens to me also, but only after a power failure. It’s quite annoying and this is why I am not a big fan of smart bulbs.

Its not a fix for the dropping, but in order not to reset up everything again you can do this: Go into IDE. Find the Device network ID (“E56F” for ex) for the newly popped up bulb and copy it down. Delete that new bulb device.

Open the set up device it should be (Outdoor light 1 for ex), copy and paste new bulb # into the network ID and delete any Zigbee ID there.

That matches them back together and all the smartapps will start working again.

Not ideal, but a quick fix when it does happen

Any status on OTA updates with ST hub?

I know this is an old post, but I have a bunch of these. I particularly got a few of the par ones as outdoor flood lights, and have them on double flood light with motion sensors (non-zwave).

Is this going to cause problems as the motion sensors will be turning the power on and off repeatedly?

If so, is it a better idea to have them “always on” and use a z-wave motion sensor outside to control the lights?

Any advice much appreciated as I just spent $200 on outdoor double flood lights with motion sensors and don’t want to install them if they are going to cause the GE Link bulbs to malfunction!

Is this going to cause problems as the motion sensors will be turning the power on and off repeatedly?

Read the manufacturer’s instructions for these bulbs – – they almost certainly say that they are intended to always be on power, not to be turned on and off.

If so, is it a better idea to have them “always on” and use a z-wave motion sensor outside to control the lights?

There are some people who have been successful using zwave motion sensors in a sheltered area covering a fairly small detection zone, so you can always try it. But it can be problematic.

There are two main options. The first is to use Mike Maxwell’s zone management smart app which will take the readings from several motion sensors to create a zone. This can significantly reduce false positive alerts.

Alternatively, people tend to use different technologies outdoors. Geopresence and/or Ibeacons Can work for detecting household members. Trip beams and pressure mats are other alternatives.

I am looking for outdoor motion sensors to monitor my yard. I bought a pair of the Aeon Labs Aeotec Z-Wave Multi-Sensor and am quite unhappy with them. Even on the lowest sensitivity setting it randomly sends alerts, some perhaps due to clouds changing the lighting (even though PIR is not supposed to be susceptible to this) and others I can’t explain at all. With several false alerts a day this thing is just useless. The Smartthings Motion sensor works great, I have some in my house, but it is indoor rated only. The Schlage / Nexia motion sensor is also indoor use only. I am hoping someone has come across an outdoor rated motion sensor they have been able to pair with the Smartthings hub.

And many people have motion-activated outdoor floods which are not connected to their smartthings system in combination with other lights which are Networked, but through indoor smart switches. This is what we do at my house. But different things will work for different people.

Hmmmm,guess all of those flood lights I just got are going back to Home Depot! There are flood lights with old old motion sensors currently installed. Since the motion detectors were basically broken, I was going to replace them with completely new fixtures like these, http://www.homedepot.com/p/Defiant-180-Outdoor-White-Motion-Security-Light-DFI-5412-WH/203766735, which I got at HD.

Maybe I just just leave the current old ones, de-activate the old motion sensors, and try rigging up some z-wave motion sensors outdoors to the GE Link bulbs in the old fixtures, and see if I get decent results…

Maybe I just just leave the current old ones, de-activate the old motion sensors, and try rigging up some z-wave motion sensors outdoors to the GE Link bulbs in the old fixtures, and see if I get decent results…

It’s worth a try. Outdoor motion sensors are one of those things where “all home Automation is local.” It just depends on really small issues like air patterns.

If you p’re going to invest a lot of money though, I would also note that weather patterns are different at different times of the year, and a system that works perfectly in November may have a ton of false alerts in July. It Can just be hard to predict.

As always, appreciate all of your help!

Since they will be used for lighting and I can always just disconnect and go back to the old way, it doesn’t really matter too much if there are some false alarms. The flood lights are pointed at the driveway and backyard so if they come on randomly a couple of times it shouldn’t make a huge difference. Not for home security.

http://www.monoprice.com/product?p_id=15271 look pretty nice and Z-Wave Plus to boot! They will not repeat though right?

http://www.monoprice.com/product?p_id=15271 look pretty nice and Z-Wave Plus to boot! They will not repeat though right?

Correct, battery-powered devices do not repeat. Zwave plus means a significantly longer range, though.

It does say on the page:

Z-Wave Plus: Z-Wave Plus® devices act as signal repeaters for the Z-Wave Plus network, so multiple devices result in more possible transmission routes, which helps eliminate RF “dead spots” in the network. Any Z-Wave Plus enabled device displaying the Z-Wave Plus logo can be used with Z-Wave Plus devices from other manufacturers.

It does say on the page:

Z-Wave Plus: Z-Wave Plus® devices act as signal repeaters for the Z-Wave Plus network, so multiple devices result in more possible transmission routes, which helps eliminate RF “dead spots” in the network. Any Z-Wave Plus enabled device displaying the Z-Wave Plus logo can be used with Z-Wave Plus devices from other manufacturers.

Exactly. Battery-operated devices do not normally repeat. It shortens battery life too much. Now if it’s a plug-in sensor it will repeat.

You can always write them and ask, but my guess is it is just code copied from another page.

You can also check the conformance statement. If it says “routing slave” it doesn’t repeat.

I will check. These look promising too, and can be hardwired… 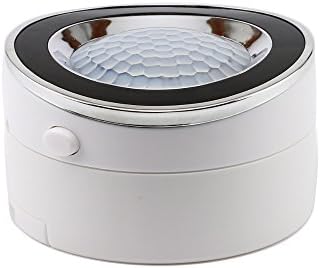 Wink and all alarm panels users : DO NOT BUY IT. Regardless your seller promised you your controller does not support many of command classes which are required for z-wave plus devices.Please note tha ...

UPDATE: Do not see either this Zooz sensor, or the Monorpice (plus) sensor) on the z-wave alliance site.

The zooz is described as an “indoor sensor” by the manufacturer, and it doesn’t look like it can handle rainy days.

Do not install the motion sensor in a place with direct sun exposure, high temperature or humidity

Also, it’s still a routing slave, so it won’t repeat.

So looks like I will go with the Monoprice.

As far as the GE Links, they really do work well. It certainly seems to be turning the power switch on and off that throws them off.

The odd thing is that it only un pairs them sometimes. Other times turning the power on and off has no effect on the pairing.

Yes, it’s a somewhat random problem. Turning the power off completely to the bulb does seem to make the problem occur more often, but it can occur even when the power has not been cut. It’s just a random issue where it seems to forget what network it belongs to.

Not all bulbs, not all the time, but often enough to be annoying.

And that is with never turning the power to the socket on/off?

And that is with never turning the power to the socket on/off?

Yes, we keep the smartbulbs always powered. We mostly use echo for light control so it’s no big deal, although we also have a couple of the Phillips dimmer switches. Eight Link bulbs, every month two or three incidents where they lose connection.