GE Link Bulbs or one switch?

Ok I totally new here. I have yet to purchase the SmartThings hub but when I do I want to some lights connected to it. I have a manual dimmable switch now that connects to two spotlights in my living room. It looks like two bulbs would be about $35-40 or a switch will be around $50. Besides the price difference, what’s the best ‘starterkit’, with the pros and cons. I also have the Amazon Echo, if that means anything. Thanks

You want the switch (dimmer) - otherwise you the power to your smart bulbs could be cut by the switch and then SmartThings would not know they were off or be able to communicate with them.

Or you could bypass the switch and use only bulbs, but then you lose manual control - that is you would need to use your phone or buy a minimote or something else to turn your lights on off.

The dimmer switch is the way to go - you preserve “normal” operation of the lights and allow complete control and knowledge by the system.

It seems like more people run into buzzing when using these low end smart bulbs with regular dimmers than with regular LEDs with smart dimmers.

That being said, you’re still probably better off getting the dimmer switch. The main problem I’ve found with using Smart Bulbs is that when your power goes out, all of the smart bulbs turn on and reset to 100% when it comes back on. The bulbs will still appear off in the mobile app, but they’ll re-sync if you turn them back on.

[quote=“BoomerTheWeim, post:1, topic:38420”]
what’s the best ‘starterkit’, with the pros and cons
[/quote]I’m only aware of one starter kit for SmartThings and I didn’t get it because I didn’t think I needed most of the items, but I later regretted that.

When it comes to sensors, I really like the $50 package that comes with 2 z-wave door/window sensors and a z-wave motion/temperature sensor. The package is sold at a lot of locations and called different things, but they all seem to work with SmartThings.

@BoomerTheWeim I vote get the switch.

Be sure to check your wiring before you buy one. Also if you are going to be dimming CFL or LED lights you must have a switch with a Neutral or Ground Feedback or it will be trouble.

Also don’t use super cheap LED/CFLs make sure they are ‘dimmable’. And keep in mind if you only have 1 or 2 bulbs that are CFL/LED you won’t be able to bring the dimmer down super low and as some have reported you may hear buzzing. Personally I haven’t had this issue.

I am also new to SmartThings
My plan is to use switches everywhere i am able like ceiling lights and so on. Then use smart bulbs for lamps plugged into outlets.
My thought process with the lamps are I really don’t want to control these with a smart outlet b/c i might have other things that i want plugged in that same outlet that i want to use separate from the lamp.
I see most people are recommending using switches. Does anyone have a recommendation on brand of switch ?

[quote=“DamageOT, post:6, topic:38420”]
I really don’t want to control these with a smart outlet b/c i might have other things that i want plugged in that same outlet that i want to use separate from the lamp
[/quote]Most plugin smart outlets either leave room so you can still use the other outlet or come with two outlets and only one of them is smart.

When you buy a smart outlet to replace an existing outlet in the wall, I believe only one of the outlets is smart.

Yep not a bad plan, when I started out I was naive and have 20 GE Link bulbs and 4 Cree’s, I didn’t know better and completely regret my decision.

As and when time affords it I will be switching everything out for switches instead, even single bulbs. As for the lamps you don’t necessarily need to use a smart outlet (and note that most smart outlets can only control one receptacle anyway), you can use something like this: 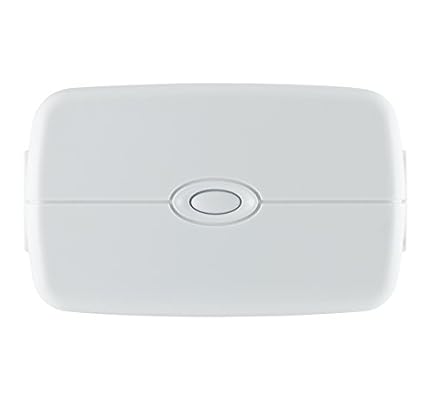 Transform any home into a smart home with the plug-in GE Z-Wave Smart Dimmer. The dimmer enables you to wirelessly control dimming lights, schedule a timed event or create a custom scene from anywhere ...

Well that is good to know. I had not put the research into the outlets yet. Is it almost always the top outlet ?

Is there a reason that these modules cover both outlets on the receptacle ?. Does it cause interference if you attempt to use the 2nd outlet ?

Is there a reason that these modules cover both outlets on the receptacle ?

I really like the “Aeon Labs DSC06106-ZWUS - Z-Wave Smart Energy Switch” because it’s about $30, it doesn’t block the other outlet, and it provides energy usage.

In all honesty it really is all about your personal preferences, which will change with each application you face.

For example, I second what @Benji stated above, when I started out I was naive. I had almost 30 of the GE Link bulbs and 4 of the Phillips bulbs. I loved them. I was also using the Amazon Echo to control my home automation.

Now, I will you give you example of where and why I made some of the decisions I did.

Where I kept the bulbs

I have roughly 35 smart switches, 9 GE Link bulbs, and 6 Phillips bulbs. I have a whole bunch of the plug in modules as well (there are great for temporary uses) Total I have about 90 devices now. I bought a whole bunch of stuff this weekend. I’m using 3 Amazon Echo’s in my house as well as a FireTV stick.

But, back to what you asked. You will find, at least I have, that the system is always changing and morphing. You will have it working perfectly and then you will have a new idea and change it. Or maybe that is just me???

But, in summary, start small and learn as much as you can about everything. Learn to use Rule Machine and the other smart apps. As you discover what the software is capable of you will figure out exactly what hardware you are needing to do what you want.

Great choice! Can that do dimming? Not sure how much these are going to be but they look very compact, can do dimming, has energy consumption AND has a USB port for charging phones! Great choice! Can that do dimming? Not sure how much these are going to be but they look very compact, can do dimming, has energy consumption AND has a USB port for charging phones!

I just got two of these last week on BuyDig.com. They get here on Tuesday and I’m already looking for more of them on sale! I got two for $40.00 total.