I’ll be excited if they use central scene commandsets or association.

I’ll be very sad if they work like the old GE handheld remotes and the button presses are invisible to the smartthings hub.

I haven’t seen any commandset specs for them yet, so there’s no way to tell, it could go either way.

The link above showed this:

Scenes can be done two ways under the Z wave standard.

The old GE handheld remotes were “scene controllers” and the problem is that they expect to communicate directly to the devices they control, they don’t tell the hub what they’re doing.

Some newer devices use the “central scene” command, “central” meaning that The primary controller, in this case the SmartThings hub, is sent the request rather than going directly to an individual device.

But both command sets are still part of the standard, so you can put out a brand-new device that never tells the hub about its button presses.

These devices have not yet been Z wave certified, so they don’t have to publish their command sets ahead of that.

Ah… did not know that.

In case it matters, they also stated “…new line of GE branded Z-Wave Wireless Smart Remotes that work with light bulbs, indoor and outdoor switches and dimmers all with or without a hub.”

Ah… did not know that.

In case it matters, they also stated “…new line of GE branded Z-Wave Wireless Smart Remotes that work with light bulbs, indoor and outdoor switches and dimmers all with or without a hub.”

That could still go either way.

Just as an example, the GE 45631 talks a lot about “scenes.” It can be added to your SmartThings account. And you can set up its button presses to control Z wave devices that are in the same room with it. But you can’t use it to change a mode or arm smart home monitor or run a routine or control a Z wave device on the other side of the house or control a zigbee device, because it doesn’t send its button presses to the SmartThings hub.

Search the forums for that model and you will find dozens of discussions about it, because initially people were confused about why it seemed to do some things and not others. 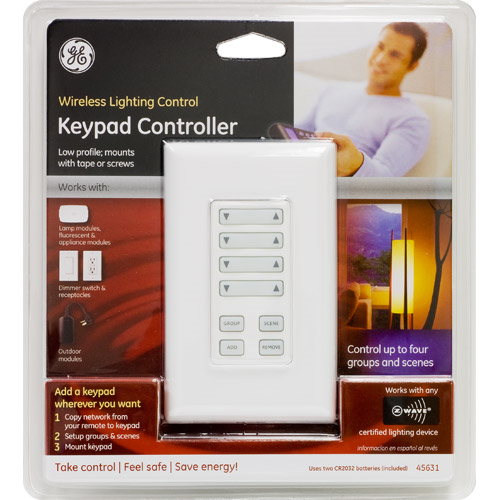 "Transform any home into a smart home with the Jasco Z-Wave Wireless Lighting Control Keypad Controller. Create and control custom lighting scenes without the hardwired mess. Add a secondary Z-Wave keypad where you need it most with simple...

The answer is technical, but specific, and still applies to many Z wave devices. I just can’t tell yet whether it applies to these new ones.

The similar form factor Enerwave SC7 or the remotec eight button device, in contrast, do send their button presses to the hub, and so they can be used for all of the functions I mentioned. But you can’t tell from just looking at the physical device, you have to find out what specific zwave commandsets they use.

More discussion in the following thread:

Debuting at CES 2017, GE Z-Wave Wireless Smart Remotes by Jasco can be used as a handheld remote or mounted to any wall as a virtual light switch to t

Opps, Is there a way for me to delete this tread as to not clutter up the forum? Still getting my feet around here…

No problem, tech moves fast and the forums aren’t that easy to search. Everybody misses a pre-existing thread occasionally. The Mods will move this one when they get a chance.

I would guess that they would at least have association. All of their new Z-Wave Plus products currently have the Association V2 command set.

For example the GE Z-Wave Plus Switch
http://products.z-wavealliance.org/products/1879/classes

Association changed with Z wave plus. It is now required that most zwave plus devices support lifeline Association for group one. But that won’t necessarily give you the same capabilities that you need, it just gets pretty complicated. You now have to look and see exactly what the device sends for its lifeline notifications. It might only send battery status.

Ah I see. That is interesting. So after looking into it more, it does appear that all of the GE Z-Wave plus switches do also support those features, even double tap.

From reading the documentation it appears that Zwave plus has added new meanings to the associations concept.

It appears that some of the associations group are used just for sending data and not control.

From reading the documentation it appears that Zwave plus has added new meanings to the associations concept.

It appears that some of the associations group are used just for sending data and not control.

Yes, the whole associations concept has changed with zwave plus. Mostly because associations were being used so many different ways by different manufacturers and it was getting very complicated even to get a battery report consistently.

With Z wave plus, most devices are now required to support Association for group one, which is now called the Z wave plus lifeline group, and there are specific types of messages which should be sent in that group. Including battery reporting. And the controller must be included in Association group one.

The remaining association groups are still open for the manufacturer’s to use however they want.

However, because zwave standard requires backward compatibility, all of the previous uses of association still have to be supported.

So now you really need to look device by device to see how association is being implemented.

If you’d like to see what is now mandated for the Z wave plus lifeline group, here’s the technical documentation:

@Sticks18 maybe you can help @WRXFanatic?

Is it a beta device? They haven’t been certified yet as far as I can tell, so there’s no conformance statement to list the commands that it uses. That makes it very difficult to match it to the device type handler. What did it pair as?

My guess would be that it will probably use central scene commands, in which case there are a couple of device type handlers that might be modified for it, but if it just uses Association, it’s now a more complex set up because of the way that association changed for Z wave plus.

@erocm1231 is usually the US button expert, you could try his device type handler for the Aeotec dual Wall mote. But again that’s using central scene commands.

[image] [image] [image] Update: Make sure your device has firmware 1.7 as it seems versions below that are a little buggy. Very cool device. Wall mountable and looks great. Micro USB rechargeable with ability to configure: Color Touch Sound Touch Vibration When making configuration changes you can either a) wait for the device to wake up and have the changes sync over. The wake up interval for this device is 24 hours so if you are the impatient type you can b) press the button on the back for a few seconds. This will wake the device up and the lights on the front will blink orange. At this point the controller will send over its configuration changes. Edit: Forgot to mention that each button supports push and held. So the dual actually has 4 possible button presses and the quad has…

Interesting, you can check out my handler posted above. Does this mean that they are going to be hitting the market soon?