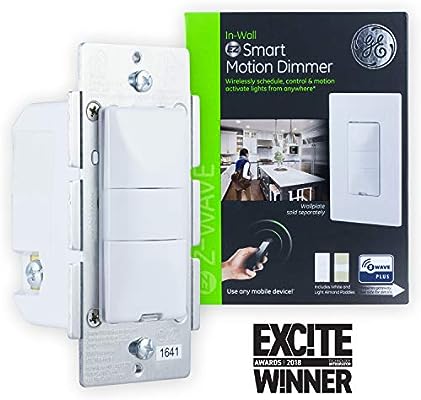 My issue is the motion sensors I have now with smartthings, aeotec miltisensor 6, is too unrrliable for my liking. Sometimes it turns on immediately, sometimes I get into the middle of the room and stand for a couple seconds before it turns on. I want to know if this switch will give the same issue. I have a generic motion light switch that turns on instantaneously every single time, I’m hoping someone can tell me this sensor is as sensitive and responsive.

First, a couple of questions about your current set up.

When’s the last time you ran a Z wave repair, and what, if any error messages did you get?

Second, do you have the Aeotec Sensor set up so that you are walking across the detection field rather than straight on towards it?

[image] I have a downstairs hallway that’s perhaps 12 feet long, with a doorway to a spiral staircase at one end (where the picture is taken from) and a door into the garage on the other end. As you can see in the picture, there’s a jog in the hallway. Not seen here are another doorway about 4 feet to the right of the one by the staircase, a bedroom door to the left at a 45-degree angle (you can just make out a bit of the trim on the corner of the wall, near the top), and a laundry room doorway on the right as you go through the jog. The hallway is dark and I want to automatically turn on the lights when I come off the stairway or enter from the garage. I have an Ecolink motion sensor and I’ve tried placing it in each of the four locations marked with circles. (The two near the top are …

Third, is the automation that you are using to trigger the device set up to run locally or in the cloud?

Fourth, what’s the firmware level on the multi sensor, if you know. And what’s the exact model number? You can change the configuration of the sleep., Which is often perceived as being a more responsive device.

( because the GE device is mains powered rather than battery powered, it shouldn’t have a sleep period, So in that sense it should be more responsive. But because you have fewer choices about where to place it, that can be an issue separately.)

I don’t have one but since the motion sensor is integrated with the light switch, I would expect it to be as instantaneous as a dumb motion switch. The only lag should be for any additional automations you’re triggering with it.

With the occupancy mode, the lights (load side if the switch) actually come on from motion locally and then the z wave notifications are sent to the hub.
@MichaelS is the maintainer/developer of a custom dth with access to all of the features you can find info here:

Version 1.0.1: GE Motion Switch (26931) and Motion Dimmer (26933) I am pleased to announce the re-release (under new ownership by me) of the GE Z-Wave Plus Motion Switch and Dimmer DTHs (Device Type Handlers)! Special thanks to @mlebaugh for the original DTH and @Darwin for the suggestions and testing of these new DTHs. These DTHs are required when using the GE model 26931 and 26933 combination Switch (or Dimmer) and Motion Sensor. No longer do you have to change batteries in the motion detectors of the room! In addition, the devices allow for limited LOCAL CONTROL of lighting based on motion. The DTH also allows you to sync other lights actions (ZWave only) within the SmartThings Environment without the need for a separate app. This is almost a complete revamping of version 1.0.0…

Mkst of the other devices you named are battery powered device and have a report cadence, ST will only respond when the device reports, and that is configurable.

That said. These are line powered and report status damn near instantaneously, and they’re very sensitive (I had to turn down the sensitivity for the one in my office.

@JDRoberts, I have two set up, each are so you walk across them. I’ve run the repair so many times to the point I think it’s a useless widget feature. Lately I do get an error because I have one switch disconnected, but before that there was no error.

@nathancu, the sensors i have are plugged in not on battery. But ill go ahead and try this. One more question, since this functions based on local motion/lack of motion, can i intercept the lack of motion with webcore? Basically this will be in a bathroom with a glass shower door. There will be another motion sensor in the shower area. I want when the other sensor detects movement the light stays dimmed. Will that happen or will it flick on and off beaded on the second motion sensor?

To get the effect. You want youll probably want to use WebCoRE or something else to control these in concert

I’d probably write one piston for the lights and run standard behavior unless motion detected within x on the other motion sensor.