Soooooo time for a little fun

I dont know if anyone else is the same, but i feel when we are all discussing things on here, some people really are doing amazing things with SmartThings and id love to visually see these things in action. a lot of new users could benefit from this if they are having a creative block on what they can achieve. plus a lot of online content lacks visual elements to show the great stuff that can be done with smartthings, it would be nice to have a source for visuals of this stuff, even if it is just this thread.

So i thought it would be fun to setup a topic where people can share photographs and videos of therir home hacks and installs and things they are proud of achieving with SmartThings as the main Source of genius.

Examples may include and not be limited by:

A cool lighting setup that transformed your boring dumb room into a moody bachelor pad.

A home hack garage opening setup when you arrive home

Even a home tour of your setup.

Just anything that visually gives credit to the possibilities with SmartThings.

A very simple home hack i did, was on my old Jellyfish Aquarium. It has a basic RGBW LED strip in the aquarium which linked to a basic RF remote, i opened up all the insides, re-routed the cabling to a Dressden FLP and linked that to SmartThings allowing me to eliminate another remote and link it to other lighting rules in the home.

1.) A demo of this Integration of Lightwave RF with Smartthings
(Stage 2 - Using an OJS Server - Rasberry PI - UDP)

2.) A demo of his Text To Speech SmartApp.

Voice notifications with a Raspberry PI and Amazon IVONA

Maybe you have a couple doors around your home that have conventional deadbolt locks.
Maybe there are times (leaving for the day or going to bed at night) when you want to make sure all of the locks are locked, but you don’t want to have to go all through the home to check them.
This technique uses a combination of low-tech and hi-tech to give you instant notification of any locks that need to be locked.

and a Zwave Door/Window Switch, one with user accessible terminals. I use the Ecolink switches.

Remove the moulding along the locked side of the door.
Mount the lever switch with two screws after attaching wires to the common and normally open(NO) contacts.
Mount it in a spot where the deadbolt will press the lever.
I bent the lever first to make it stick out a little farther.
Attach the other end of the two wires to the contacts on the zwave switch, mounted on the wall beside or above the door (no need for the magnet).

When the deadbolt is locked it presses on the lever and trips the switch.
Because this switch is wired to the contacts on the zwave switch, that zwave switch gets tripped.
It will appear as closed in the ST app, and open when the lock is unlocked.
When the moulding is put back in place all you see is the zwave switch.

You can check the status of the locks anytime in the ST app so that you don’t have to roam from door to door to check them.
You can set up a rule (I use Rule Machine) to send you a text with the status of the locks if you want to.
I have rules that send me a “Door(XX) is unlocked” text at 10:00 PM each night if a door has been left unlocked. If I don’t get a text, the door is locked.

That’s my contribution to this thread.

Very simple hack…I’m in a wheelchair. We needed a light switch where my assistance dog can reach it. So…Philips hue dimmer switch (which comes with a magnet back) on the refrigerator! 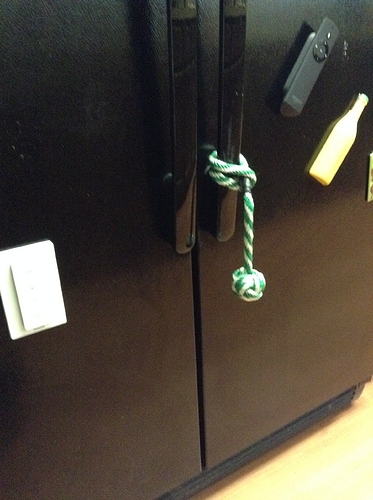 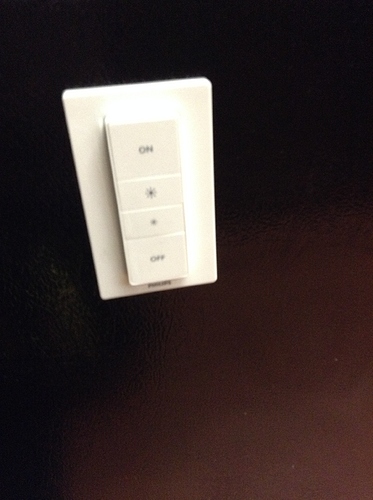 And another dog-friendly switch…

The yellow dot on the left of the tv stand is a flic button. Knee height for me, nose height for the dog. This one turns off the entertainment center. 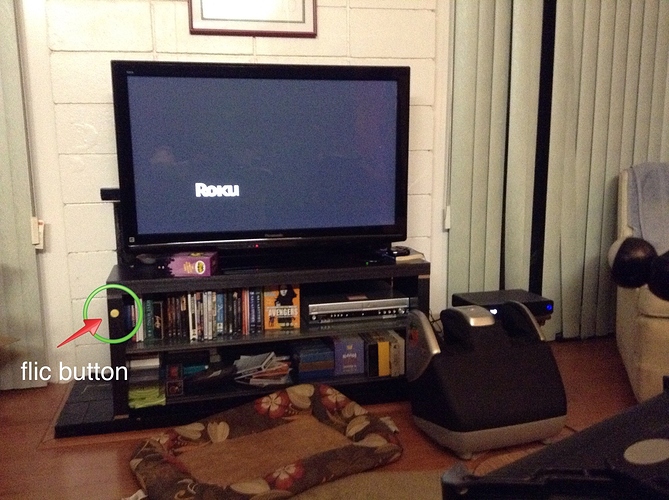 @pete has a great thread with video on his mood cube project for lighting control:

I built a wooden cube that has a sensor inside that talks to the Mood Cube SmartApp to control my Hue bulbs. Each face has a colored wooden inlay (held in place by magnets) that tells you which color scene will be activated. Hidden behind two of the circles is the bolt that holds the cube together. It can be easily disassembled when I need to replace the batteries. Here’s a video: [image] Just thought I’d share. I can post photos of the build process if anyone is interested. EDIT: Added some photos of the process since a couple folks asked. Enjoy! The building blocks. I bought these online somewhere. [image] Glue and clamp. Each half (4 little cubes) were done separately. [image] Drill a hole for the Multi Sensor [image] Multi Sensor removed from plastic casing and fits s… 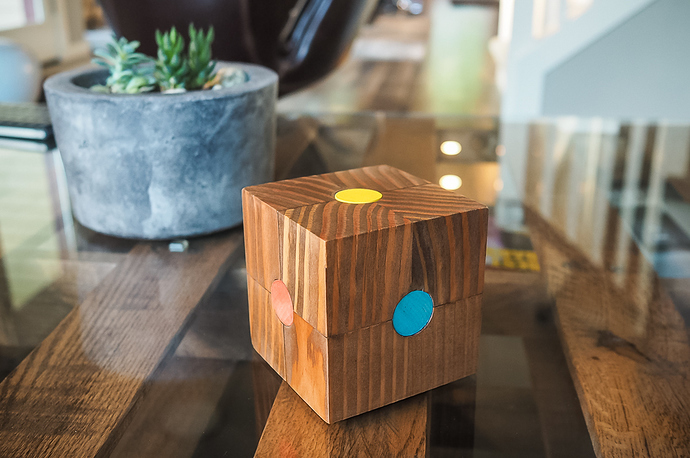 So how does this work with the sensor? Surely that will not know if the door is unlocked. Or do you use a second that reports open closed for locked unlocked only.

So how does this work with the sensor? Surely that will not know if the door is unlocked. Or do you use a second that reports open closed for locked unlocked only.

Anthony,
I’m not certain I fully understand your question, but here is how this works.

The micro switch mounted behind the deadbolt strike plate is wired as a normally open switch. When the deadbolt is locked the switch becomes closed. As it is wired to the terminals in the contact switch, that contact switch becomes closed. The ST app shows it as Closed when the door is locked, and Open when the door is unlocked.

I have assigned this particular contact switch to a modified version of the Zwave Door/Window Sensor Device Handler.
I’ve made some progress in having this switch show up in the app as Unlocked or Locked instead of Open/Closed.

I hope this answers your question. I’d be happy to offer more info if needed.

1 Like
Would like some advice: kitchen lighting and HVAC project (UK)
LED Lighting and SmartThings
John_Crighton (John Crighton) March 17, 2016, 9:47am #11 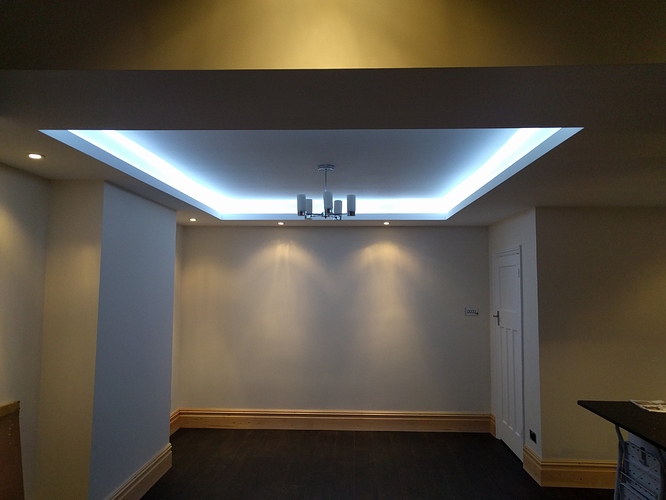 This is a picture of my soffit box lighting. 1x Fibaro RGBW plus three runs of RGBW LED strips, just over 12m all round. I had to use RGBW extension leads to get the bit furthest away from the controller done, but the end effect looks great, and very simple.

I’ve posted this before:

Now the Ring Doorbell will trigger the same thing on motion sensing or button press, note that this is a little slower to trigger initially since it’s going through IFTTT:

What’s interesting is that the first video requires a combination of 5 different Smart Lighting rules (I never did this for the doorbell), want to know how powerful @bravenel’s Rule Machine is? The garage door one could be done with ONE rule if done in Rule Machine, heck, I could probably combine the entire lot into one rule! So thanks again to Bruce for Rule Machine!