A thought just occurred, and not a good one. This is only conjecture, but we have some really talented developers in the community. Given the speed of the deployment, it makes me wonder whether there was a critical security flaw? You usually wouldn’t announce the flaw until after the hubs have been updated, especially if it exposed the larger infrastructure.

who woulda thought to check their email before reseting the garage remote codes, checking for suspicious vechicals, assuming nefarious garage door hackers, after the garage door mysteriously opens.
I am releived for a plausable explanation however.

But while the issue has been raised multiple times in the past, the company philosophy appears to be that it’s more important to get the updates out then to address the scheduling needs of individual customers.

To me, this just shows SmartThings’ utter arrogance and total disregard for customer’s needs. For comparison, Wink also releases frequent firmware updates, but unlike SmartThings, they don’t shove it down your throat. They just pop a notification in your mobile app and allow you to initiate the upgrade when is convenient for you. Same goes for Philips Hue and Vera, by the way. It’s not that difficult, is it?

This should not cause any noticeable downtime. However, this update may cause any Arrival sensors you have to send a departure and arrival event. Please check any actions you have tied to an Arrival sensor to ensure everything is behaving as expected in your home.

There aren’t enough emojis in the world to express how I feel about this.

Of all the drawbacks of a Cloud centric system, this is the one I think I didn’t predict.

Although, now that I think about it, false or delayed presence state change events would occur even if the hub rebooted due to non-cloud issues… hence the value of batteries to avoid rebooting for short power outages.

The frustration here is that SmartThings knows the risk (and, finally, actually announces / publishes it), but trivializes it with insufficient notice nor a recommended workaround (like disabling all presence change events before and after the update).

Was just thinking about that, I cannot think of one company that doesn’t respect my privacy. Every one that I use has the decency to ask my permission to push an update, no matter how beneficial that update is to my gadget. Seriously, can you think of one that doesn’t ask?

Update: found one gadget, Amazon Echo. Has no option to prevent auto updates.

There isn’t. That’s why the platform has so many disparate issues.

Many of the problems we are experiencing are not difficult to solve from a technical perspective. The problems at SmartThings are deeply management related.

Seriously, can you think of one that doesn’t ask?

I think, Amazon also updates Alexa silently, but I’m not 100% sure. As a rule, I consider this very bad practice, particularly for home automation devices, where safety and security of the system can be compromised during the update.

Obviously we need better communication, but I think this may have been critical where the risks of pushing immediately out-weighed the risks of doing nothing… Or at least this will improve usability so much that we will have some normalcy. We are all in violent agreement (or non-violent, but still… we’re all saying the same thing).

Can we get an update on fix details from @slagle or @Ben? That will be most useful.

Every one that I use has the decency to ask my permission to push an update, no matter how beneficial that update is to my gadget. Seriously, can you think of one that doesn’t ask?

Oh … it’s a bit hard for me to come up with specific examples, but, there has been a disturbing trend over the past few years of forcing updates…

Chrome browser, Firefox browser; Windows 10 all force updates (but they do allow a lot of deferrals but Firefox is SUPER annoying about it).

But just because the practice is common, doesn’t mean it’s good, and SmartThings could offer much better options. (Such as pushed updates that are deferred until user activates) … but, really, on average, most consumers prefer silent updates … if they are truly silent and don’t result in garage doors opening, etc.!!!

It seems like the 14.22 update coupled with a silent platform update has fixed some issues. Presence sensors now fully functional, timed routines work properly now and at the right time and the SHM intruder notification now works properly rather than firing even when set to disarm.
I’m glad they do it remotely and without me needing to interfere. It would be nice to have had at least 24 hours notice though.
All in all these updates have made my Hub much more stable and responsive. Very pleased.

I wouldn’t say we were beta testers. The issues that everyone is experiencing are introduced bugs because of feature enhancements that have been added. This is an incredibly complex machine with a huge amount of capability. How many here would want ST to stop adding new features, integrating new officially supported devices (without charging a dime) providing and supporting an IDE that lets YOU create your own device types and integrate your own solutions over 100% lockdown on a version that’s 99.99% stable?
Think of it this way, a car company makes a car, you buy it but they don’t come along and add a new feature. You have to buy the next car they make when yours wears out. I bet you would be happy if you came out one morning to find that you had power adjustable seats and cruise control and no bill. Hell I would.

No I’m not saying that this isn’t important because it is. Security is very important. We rely on the hub to perform the duties assigned to it and be reliable.

I would be interested for a poll on lockdown or open?

I would be interested for a poll on lockdown or open?

The point is moot. SmartThings is 100% going to “fully” control the Hub and Cloud regardless of it being V1 or V2.

They will never offer telnet or any significant user control that could open it to hacking (it would be really stupid of them to do so).

There is talk of allowing Developers to push test code to their own hubs. That certainly makes sense because it is supposed to be “open” at least to the extent that Developers need to be able to develop and test on the real platform. But SmartThings does not want code distribution via cut and paste – everything is supposed to go through the submit, approve, and Marketplace process. That means the “development mode” on the can feasibly be severely restricted … i.e., just enough memory for one or two SmartApps, or Apps that unload automatically to prevent extended execution, etc…

Just random thoughts here, but my point is: Just because Hub V2 allows “local execution”, doesn’t make it “your hub” any more than Hub V1 where it was 99% Cloud. The $99 cost of the Hub is really just a lifetime license to the SmartThings Cloud (where the license key is transferable and solely tied to the Hub serial number).

And; of course, controlling when the SmartThings Cloud updates is even less likely than controlling Hub updates.

I am glad as well that the presence sensor issues are fixed, but the way of communicating these kinds of updates is really medioce.

And actually yes, I do feel this product should not be available in retail in the current state of things. It really is still a beta product (or at least an ‘enthousiast device’) and not something someone remotely tech savvy is capable of controlling…

It has heaps of potential, but someone at SmartThings/Samsung should really think how they are going to conquer the world with this product…

I woke up to an email yesterday with the following content:

A subset of SmartThings users were affected by a platform issue
resulting in Hubs going offline. We addressed the underlying cause and
do not anticipate further issues with Hub connectivity. There are,
however, a small number of SmartThings Hubs that will require a reboot
before they will come back online. Your Hub may require this action.

If your Hub is currently offline, you will need to perform a reboot by
pressing the recessed red button on the back of the Hub once. Wait
several minutes for the LED to turn solid green; this will indicate the
Hub is back online. Once this process is complete, your Hub should be
fully functional once again. We apologize for any inconvenience. If your
Hub doesn’t come back online within 5-10 minutes after performing the
reboot, please email support@smartthings.com.

I checked and my hub was offline. I had to reset it to bring it back online. 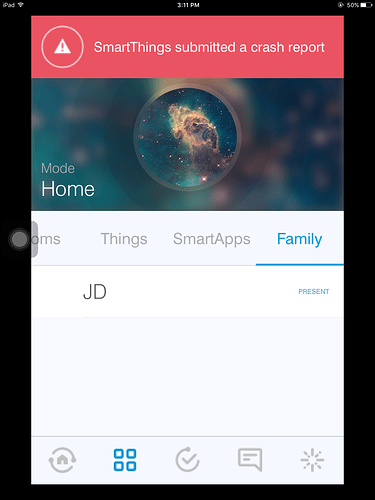 The founders / executives are “thinking” about this very hard. I emphasize what I’ve said in a few places recently – SmartThings’s problem is execution (implementation of ideas, features, details, and bug fixes) and operations (maintaining stability of what does work) – and those are failing due to poor management.

Jeff Hagins (Founder, CTO) has absolutely excellent, brilliant, ideas. He described Hub V2’s architecture to a very high level of detail around April 2015. But only 25% of it was implemented by the time they were forced to deploy on September 3rd by forces outside his control (cough… Samsung … cough). Not that SmartThings would execute any better without Samsung, to be clear. Samsung certainly helps perhaps more than hurts.

While an over simplification, I believe that the design executives (Jeff, Dan, etc., etc.) really have the ideal platform pictured in their heads and can even describe it in a tremendous amount of detail. They may be overlooking certain risks and details – and, well, the devil

is in the details. But the company and product’s flaw is less about the details than execution.

You can have an architect design the most amazing building in the world. You can then have construction engineers refine it to cover all the physics so that it is designed not to collapse and fits tall people, fast escape routes, big freight elevators…

But then it is out of their hands. If the construction company can’t line up ducks, the building will be a disaster. Materials specified by the engineers might not be available – who can competently figure out the correct substitutes? Angles the architects planned get fought by local government for blocking views or having the wrong aesthetics – who can competently handle the cascade of changes required? A labor shortage suddenly exists – who can decide what corners can be cut to still deliver the building nearly on time and within budget?

And then the construction company gets an order from the building’s funders in South Korea that they want it to be 10 stories taller, but cut out half of the underground parking lot, and change the color of all the windows…

Did the ability to replace a device using the mobile app disappear with this update?

I was just going to post the same thing! I came home tonight to a dead switch, and I thought “no problem”, a quick replace device will get me going again. But not anymore. WTF SmartThings?

I was trying to do the same thing for the same reason. I tried iOS and Android - missing on both.

How can we get dead devices with these updates, I don’t freaking understand why my zigbee mesh gets kicked in the nuts. Several of my zigbee devices are dead. Can someone please explain this to me? It’s happened several times. Cannot be coincidental.