Thanks Cody, do you happen to have a link for the strips you’re referring to?

Have them for toggles too. 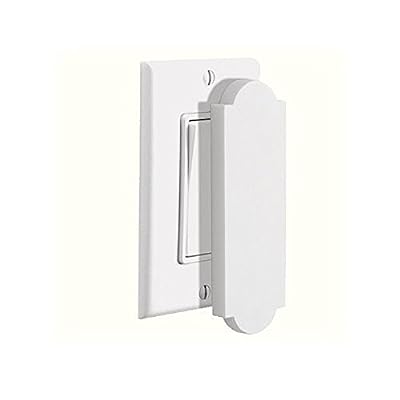 It's the perfect way to avoid the "Ooops... I accidentally shut the light on Shabbos!" Built-in magnet attaches to switch screws - no need for tools or electrical shorts.

Does anyone have a smart app that would allow me to setup an alternating red/green light show for Christmas using the Fibaro? I don’t code and was wondering if something out there already existed that I could use.

A second question - I currently have an outdoor 12v system. Can I replace one of my light fixtures and wire a fibaro controller in to control some LED RGBW strips using the 12v power source?

I would think you could change the color of the Police lights. Search the code for that and change the blue to green? Maybe?

All of the program functions like the police lights are programmed into the switch by Fibaro. You can create your own programs, but I don’t think anyone has done it unless they have the Fibaro controller. A SmartApp could be written to accomplish the christmas lights, but I don’t know of one at this time.

You could try this:

Rule Machine is so generalized that it can be used to do all sorts of things. This topic is for examples of cool Rules. Show us the novel ideas you have come up with for things to do with Rule Machine! To start off, here is a fun rule: I bought as OSRAM flex color strip so that I could test the code in Rule for setting colors. Now that Rule and Trigger have that capability, I use it all the time to show Rule and Trigger outcomes on my desk, where I have the flex strip plugged in. I thought that putting the light into a loop would be cool, so check this out: [image] “Loop Switch” is a virtual switch I created in the IDE, an On/Off Button Tile. This rule could easily be modified to run anything on a repeating time schedule, e.g., once an hour, once every 20 minutes, etc. This part…

Evening. I"m trying to install the RBGW controller code but I keep getting an error when trying to save the code. I’ve been over how to create your own SmartApp and copied the code from twack’s page but it won’t let me save it.

Am I being stupid and missing something really basic here?

Install as a device type. It should work then.

So, still no fix for the “return to last color” when warm white was the last color used before powered off?

I planned on buying about 5 more Fibaro controllers for additional projects around the house, but this may be a show stopper.

Should be able to get to it over the weekend.

FANTASTIC! Thanks so much @twack

@twack is there any way for a a holiday (green and red) light show to be added to the code? I have tried unsuccessfully to do it with other SmartApps and I thought it would be cool to do that for the kids. Maybe using a modified version of dark fade?

All of the program functions like the police lights are programmed into the switch by Fibaro. You can create your own programs, but I don't think anyone has done it unless they have the Fibaro controller. A SmartApp could be written to accomplish the christmas lights, but I don't know of one at this time.

@fraserjr Sounds like the Rule Machine one minute limit doesn’t fit your need. This must have been one of the new SmartThings limitations added because the Flasher app turns lights on and off within seconds. I wonder if Flasher has been deprecated because I can’t find it.

The flasher app still exists in the Smartapp templates. The issue I had was you couldn’t alternate colors of the flashing or the speed or fade. I think it was limited to just flashing “lights” for a set period of time or number.

it would be cool if there was an app that allowed you to create programs for your led strip lights. Since so many people on here seem to have them, I think it would be pretty popular, if doable.

I would think it would require local processing at the minimum. It also should not send the state change to the cloud. I believe the SmartThings architecture needs to be enhanced to handle this. Basically, the cloud needs to know it is running a local routine but not the specifics of what the routine is doing.

Unfortunately, I don’t see this coming soon unless there is a more compelling need.

Probably more likely is a Fibaro firmware update that includes such a routine (similar to police, fireplace and lightning). This, however, is also a relatively small niche that it is not likely soon in my opinion.

The most likely is a third party hobbyist creating inputs into the Fibaro 10v analog inputs. It would be rather expensive however.

I have noticed that when I turn on the lights manually and not through an app like smart lighting, the beta version turns the fire setting on.

I know its close to the holidays, but were you able to get to it?

I worked on it over the weekend, but there are some other things I need to clean up in the DT. Crazy busy…