BTW, if your use case works if the lights always come on when there is motion outside, there are a number of very good nonnetworked outdoor lights which can be combined with SmartThings controlled devices.

As I’ve mentioned elsewhere, I really like the Mr. beams brand of nonnetworked motion sensor outdoor light. Very well engineered, not too expensive, widely available in a variety of form factors and with different light levels . We use a bunch of these.

Now stick an Aeon sensor near them with its motion sensor turned off and trigger SmartThings events off of the change in lux when the Mr. beams turns on.

You have a reliable motion sensor light that always works even if your home automation system is down, but if SmartThings is up you can get additional notifications and events. 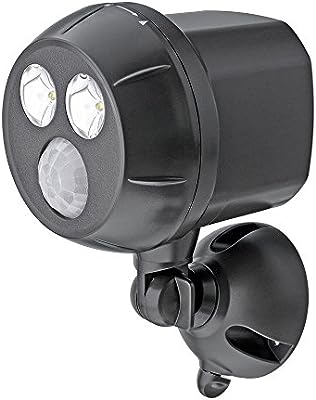 Our Wireless Motion Activated Spotlight detects movement up to 30 ft. away and responds with a superbright (300 lumen) beam of white LED light. This rugged, weatherproof unit installs in minutes witho ...

However, what you can’t do with this kind of set up is use a mode to prevent the motion sensor lights from coming on. Some of the nonnetworked lights do have a remote control that let you turn off the motion sensor, but those models cost more and you’d still have to do it individually for each light.

So again it comes down to your particular use case.

Thanks JDRoberts. I’ve already got light fixtures installed and setup with in-wall smart dimmers in the house so new fixtures doesn’t work in my case. Would also like to be able to trigger other actions in the future besides just the immediate light around the motion.

Viable Outside Motion Detectors for 2016

Yeah, it can be frustrating. It’s a physics issue, it has to do with PIR sensors. There are alternatives, but they cost a lot more than the DIY home automation market will pay for. So really it’s a budget issue – – the manufacturers don’t make them because people won’t buy them at the required price point.

If you’re willing to buy three sensors for each zone, as discussed above @mike_maxwell 's zone manager smart app will solve most of the false alert problem. It’s a good solution, but obviously requires spending more money. But with that one you could use the Aeons (or the Fibaros in a sheltered location, they’re not as weatherproof).

I’ll have to find the article I read and provide a link, but I liked the idea it brought up. You use your existing hardwired motion detection outdoor flood lights. Add a relay in the lights outlet box connected to the flood lights. When the detector triggers it of course turns on the flood lights and the relay status is now on. Based on the change in state of the relay you can automate other actions. I liked the idea that it used hardwired solution with no need to replace batteries and you can use any hardwired motion detection outdoor lights even existing ones.

Ah, there is already another post on it with the video I watched, The ultimate Outdoor Night Motion Sensor?

At this point (September 2016) we should also mention that there are several video doorbell’s and some cameras that have their own motion sensors and can be integrated with SmartThings. Quite often these motion sensors work better outdoors than any that connect to SmartThings directly. ( One reason, to be honest, is that these tend to be more expensive devices and they can put more intelligence into the motion sensors to help filter out some of the false alarms.)

Some of these are only warranteed for indoor use, but depending on your weather may work in a sheltered location outdoors.

There also IFTTT integrations with Ring and several cameras, including blink and homeboy. Look in the “security and monitoring” channel section, not “photographs and videos” (which are for services, not devices).

And one of the community developers has a blink manufacturer approved integration with many features. You will have to pay a license fee for that one.

@Alwas can you tell me what sort of Fibaro relay you used? Thanks.

Thanks for the swift response. Bit more help if you can…?

The use case here is to use a 240V PIR motion sensor as an input to ST. I don’t want to control any lights directly using the relay due to location and the probability that I will use Smart bulbs (turned on/off by ST).

So… if I wired up the relay as follows:

And replaced the switch with the output from the PIR (between S1 and I) that would then result in ST see the relay turning on and off. Correct? In my case there would be no load I’d just have a PIR.

I think someone more intelligent than me should chime in here, as I can’t remember exactly what I did, in layman’s terms I placed the Fibaro between the light and the motion sensor, so when motion triggers it sends power to the light, via the Fibaro, so I get notified, and the Fibaro can also turn the light off, or on, if needed. You need the wiring diagram of the motion sensor as a starting point. Sorry I’m not more useful.

Okay, think I have it. Here’s the response:

So to answer the original question. If you want to use a mains powered PIR to trigger ST then you can use a Fibaro Relay (the FGS-212 replaced the FGS-211).

In my case I’ll be using it without any load (my lights will be Hue bulbs in a different location). I’ll be using the motion detector to trigger the relay and then use ST to turn lights on/off/up/down.

the fact that this will be located high, won’t require batteries, needs along range (12m) drives the requirement.

Thanks for the pointer @Alwas

Nope, the fixture module is an actuator (output device), it has no means of taking an input voltage level and sending that to smart things like sensors do…

You can definitely use the Aeon labs micro. I went the cheaper way and use a Monoprice in-wall controller instead.

if I wanted to control the light as well.

I take the Mains Neutrals and Live to the Mains Live and Neutral in on the controller.

Red wire from the sensor goes to one port of switch on the controller?

Live wire from the lights go to the load Live on the controller?

[quote=“Byron_Poland, post:70, topic:1513”]
I take the Mains Neutrals and Live to the Mains Live and Neutral in on the controller. [/quote]
That’s correct. Neutral and Line (live) into AC Power N and L

There are 3 wires going into the sensor. White = neutral, black = line hot (live) and red = load from sensor. Red wire 120Vac when motion is active. That’s why we this this for our switch.
Connect white to neutral bundle.
Black to main line hot ( live) bundle.
Remove the red wire of the sensor from the red bundle and connect this wire to the Aeon wall switch terminal. The terminal farthest to the right. DO NOT connect this to the 3V terminal.
Connect the 2 red wires from the lights to the L load terminal of the Aeon micro.

You meant to say “connect neutral into AC Power N on the Aeon controller”? Then yes that’s correct.
Ignore the Load N terminal on the Aeon controller. We are not using it since the lights already connected to neutral.
Does that make any sense or am I still confusing you? Here is a typical wiring inside a motion light fixture.

I put this crude drawing together… for the red into the wall switch from the sensor, is this the port closest to the 3v or furthest? is this mostly correct?