If Alexa helper isn’t working, then you need to ask your question in that thread and people there will help you.

All, Be sure to read this thread…newer version is listed below Been quiet lately installing more Echo’s in the house along with the V2 hub. Everything is good and I am taking a more ST approach to my homes, getting rid if IP devices and replacing them with ST compatible items (Samsung SmartCams replacing DropCams, a ZWave garage door opener instead of Chamberlain’s model, etc). Anyway, I am 100% in to home automation. As such, I re-looked at my Alexa Helper app. ST has been a bit slow in reviewing submitted apps, so I took an opportunity to update this app. One of the limitations of the platform is the inability to have more than 4 scheduled items within an app. To get around this, you must install the app multiple times. In the original Alexa Helper there were 6 slots, but only 4 that …

Thanks guys! I got it authorized and now showing up on Alexa. Now, i just need to get the virtual trigger to actually do something

It doesn’t do anything.

Thanks guys! I got it authorized and now showing up on Alexa. Now, i just need to get the virtual trigger to actually do something

It doesn’t do anything.

For that, ask in the Alexa helper topic. They should be able to help.

There is so much documentation out there that I am entirely confused. Is there a simple step by step on this? I am overwhelmed. I THINK i set up a switch, I THINK I set up Echo helper. Later I read somethign about need to cut/paste code for a “helper”… I dunno. There are apparently new versions of this or that — so I don’t know which instructions are the right ones. I really am just frustrated.

I just want to be able to have Echo run the “Good Night!” Routine by voice command.

Hell, I’ll pay someone to walk me through this.

If the Alexa helper thread seems too complicated to you ( that’s a smart app that has definitely become more and more complicated over time, and I understand it can get confusing), try this simpler one. It is literally a step-by-step FAQ for what you were asking. I have updated it today, so if you looked at it earlier, look at it again and I think it will help.

Most likely you signed into the wrong shard for your account.

Overtime, as SmartThings has added many more customers, they have added additional “shards.” ( you can think of these as database servers.)

You wouldn’t think that SmartThings would let you sign into one that’s not associated with your account, but it does, and if you do then you won’t see any of your devices or smart apps.

There are still many posts in the forums back from the time when there was only one shard and so the direct link may not work for you.

See the following FAQ to figure out which link you should be using and then try that.

You have to be careful about your naming. I tried “music studio”, but Alexa thought I was asking her to play some music! lol In any event, it’s gonna be massively cool when the band comes over and I do this the first time

Click on “community” at the top right of this page to return to the first page of the forum.

Then click on “developer tools” at the top right of that page. 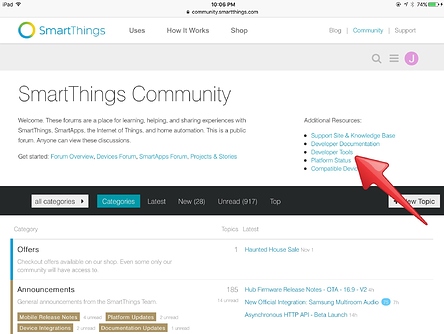 Why is this so complex? Why isn’t a virtual switch just listed in the Things list???

Why is this so complex? Why isn’t a virtual switch just listed in the Things list???

You’d have to ask SmartThings that. A number of us have suggested that for a couple of years. Because virtual switches are so helpful for many different things, it would be great if SmartThings made it easy to add them. But they don’t.

SmartThings is very powerful and very flexible. There are usually two or three different ways to accomplish just about anything. What it isn’t is discoverable or intuitive.

Fortunately, the community is very helpful and always glad to help. But almost all of us are just other SmartThings customers-- we don’t have any inside knowledge on their design philosophy decisions.

I’m not a developer. I just want to be able to set a scene in a routine using the app. I’m not sure how I found my way into a developer conversation. There doesnt seem to be a simple way to set a lighting scene.

I’m not a developer. I just want to be able to set a scene in a routine using the app. I’m not sure how I found my way into a developer conversation. There doesnt seem to be a simple way to set a lighting scene.

I agree with you absolutely. What SmartThings offers is power, not simplicity.

Since we’re getting pretty far off topic for this thread, I suggest we take follow ups to the following:

I want a rules engine, not apps SmartApps & Automations

More and more I find myself wishing that SmartThings just gave me a simple interface for a rules engine. Trigger, Conditions, Actions. I can code and have written a few smart apps for my own uses, but the approach is very tedious. The current app feels disorganized and it can be hard to troubleshoot issues. (what just made that light turn off!? I end up looking in 3 different places to see what is going on) Why can’t it be simple to define a rule that says, when the time is 11:00 PM if both people are home then lock the front and back doors. I know I could figure out a way to make this happen, it’s just so far from easy and intuitive. I want to define a rule by setting a trigger, conditions, and actions. I want to be able to easily see which rules are associated with any individual…

Use “momentary button tile” or one of the other momentary device types if you want something more like a classic doorbell button where it only goes on at the moment that you activate it, and then returns to the off state on its own.

OK I guess I missed it but where do I find a Virtual Momentary Switch in the IDE. I see Button, Garage Door, Switch but not momentary? 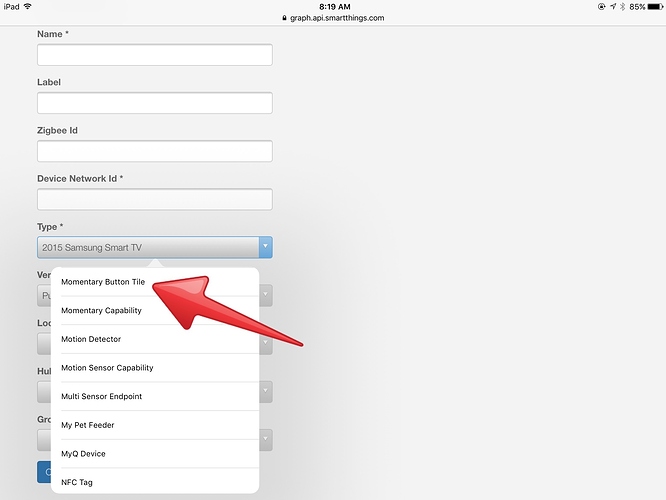 Yes, as usual I looked under simulated switches, not where it was. Thanks.

Just getting into simulated devices. I’ve created a simulated button, but now how do I press/activate that button from the iOS app? Or do I have my thinking wrong and you can’t ‘press’ anything on iOS to simulate the button press?

Just getting into simulated devices. I’ve created a simulated button, but now how do I press/activate that button from the iOS app? Or do I have my thinking wrong and you can’t ‘press’ anything on iOS to simulate the button press?

It will show up in your things list, and you just press it there like any other on/off switch.

Yup, got that. I created a piston to dim a light when pressed, but the button appears to be grayed out and when pressed, nothing happened/(s).