I haven’t personally tested yet; but this contribution seems very promising.
The above steps will no longer be required once this one-timer is installed…

While this isn’t an official feature, I thought it might be helpful to have a virtual switch creator. You need to get it set up by installing a device type and smart app, but after you have it set up, you can create as many switches as you need from the app without going through the IDE. Instructions for installation can be found at github.

I saw that, too, and agree it looks promising, but until it’s ST provided, you need @mattjfrank 's FAQ above (which I really like) to know why you’d want @baldeagle072 's code.

I’m trying to use this Virtual Device to connect to IFTTT, but it seems to not be showing in my ‘switch’ list on the website. Hopefully this is a time thing, and it will show after some time. Anyone have any ideas why it might not be showing up? I’ve done the instructions to a T.

My idea is that when I leave work, it will set my air conditioner using a “Home Mode”.

You have to go into the IFTTT site ST Channel and re-authorize on the website so you can tell IFTTT to see that as an available device. You can also do it via the ST App under ST Labs

Just wanted to mention that sometime in all of the recent platform changes the terminology changed as well: what used to be listed as virtual switches are now called “simulated” in the ID. Everything else is the same, though.

One additional issues since this FAQ was originally written is that SmartThings now has multiple database servers. If your device list is blank when you follow the link in the step by step instructions above, see post 46 below in this thread.

Also, @BBoy486 has a topic where community members can answer the second question in the original post in this thread: why would you use a virtual device in the first place?

I would like to get some ideas on how the community is using Virtual Devices with ST and any third-party devices (Sonos, Alexa, G Home) or why you use them with officially supported devices. Hopefully this will help other think of uses they wouldn’t have figured out without this community.

used to be listed as virtual switches are now called “simulated” in the IDE.

Yup… This is a confusing choice of terminology, because when I think of “simulated” Devices, I think only of those that run in the IDE’s Simulator.

The IDE Simulator is a very important piece of the SmartThings Platform, of course…

But even the Simulator doesn’t call test Devices “Simulated Devices” … it categorizes simulated Devices as “Virtual Devices”!!!. Here is the relevant screen snip: 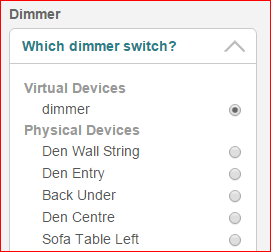 Ok, newbie question. To clarify the use of a virtual switch please tell me if I have this right.

Let’s say I have a device connected to my ST hub that is not compatible, or recognized, by Amazon echo. I can use the virtual switch to control the unseen device via echo?

Also, how do I tire the virtual switch to the physical device?

Ok, newbie question. To clarify the use of a virtual switch please tell me if I have this right.

Let’s say I have a device connected to my ST hub that is not compatible, or recognized, by Amazon echo. I can use the virtual switch to control the unseen device via echo?

Also, how do I tire the virtual switch to the physical device?

I see the routines, but how do I make the virtual switch control the routine?

Do I have to create a smart ask to control the virtual switch and that is what makes it tire to the physical device?

Did you follow the link I just gave you? I know the forum is a little bit confusing, you have to click twice on the little tiny arrow that is pointing right on the far right side of the quote, and it will take you to that Thread.

Step two in that thread discusses exactly that issue. And gives you the link to a smart app, Alexa Helper, to do just that.

Normally, you would connect the two by having a routine that triggers what you want to have happen after your virtual switch comes on.

So let’s say you want your virtual switch to lock your door.

You set up a routine that does nothing except lock that door.

Then you use have the virtual switch trigger that routine.

So here are the exact steps:

One) create a virtual switch

Three) Use the virtual switch to trigger the routine

( we used to have to use Alexa helper or another smartapp to tie the virtual switch and the routine together, but starting sometime early in 2018, they made this an official option so you can have a routine start when a switch comes on. So you no longer need Alexa helper.)

I had no idea that was a link, thanks for pointing that out to me.

I did figure it out, your comments and links helped greatly.

I created a virtual switch, which I added to echo. I then installed a smart app and used the virtual switch as a trigger to control the device. I added the switch to a room for organization and now echo controls the switch.

I also see how the routines work with the switch as well.
Thank you.

Yeah the links used to be a lot easier to use before the last forum change. I’m not sure why they’re so difficult now. It drives my screenreader crazy.

Just wondering if we can make a virtual toggle, that toggles on to off or off to on depending on needs?

Do you Mean one where if it’s on turn it off, and if it’s off, turn it on? Several people have done that code, I think if you search the forum for toggle you would probably find it. I don’t believe there’s a standard device type that does that, but I could be wrong.

See the following topic, you should be able to amend it to do what you want. If you don’t know how, ask in that topic and I’m sure those guys will be glad to help you.

So, I have a Smartenit 3 Button switch, which I love. I would really like to assign a button to execute two things: If in X mode(s), execute Y Hello Home Action If in Y mode, execute X Hello Home Action Basically, this would be a Movie Mode / Home Mode button. Press once to place in Movie mode, press again when the movie is done to exit movie mode and enter regular home mode again. Anyone have any suggestions? @obycode - This is why I would really love to see individual button support for this switch controller and the Minimote. Your iOS app could so easily handle this with just two entries…without even breaking a sweat. I would have the whole thing setup in less than a minute and a half…and NO CODING!!!

I did search but did not come up with anything at the time. I will search again. I can manually toggle an On/Off switch and it will work. But was looking for something that does it automatically, As always thanks again @JDRoberts

Ok. Now I have a virtual switch, but it doesn’t do anything. How do I add devices to it for it to control?

It depends on how you plan to use the virtual switch, what do you want to use it to control?

Any help as to how I could add 3 hue bulbs to this so that I can have one button to turn on/off the bulbs in one go (or even better have a virtual dimmer for the set)?

Edit: ignore me. Realized I was being dim and not thinking logically. Create the virtual switch then create an app which uses that switch as the trigger to control the multiple lights.

You can control multiple switches triggered from another switch using smart lighting, no need to write an app to do that.