Hi, I am looking for a scheduling tool that can handle multiple (and many) time based events - in particular I want most to do this for a thermostat (or group of thermostats). What I want to replicate is the way Nest or Heat Genius allows you to set (in that case temperature) at any arbitrary point/range on any time point on any day (and ideally with repeating schedules).
Or something like this 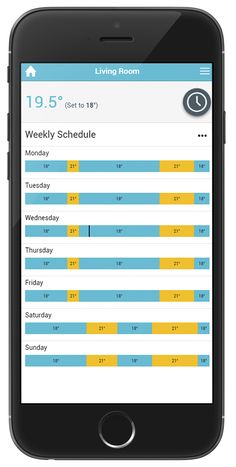 Now, this doesn’t actually have to be a smart app, it could be a site with an ST integration, or a clever trick with CoRE, or even via IFTTT/Stringify

However I can’t find anything at the moment that isn’t limited. RBoy does various mode based or 5-2 based schedules but it’s not quite right

I’d also in theory use this flexibility for lights, eg on/off or colour/scene

Have I missed something out there that gives that kind of quick multipoint configuration?

When I first read this title, I imagined a system that would create entirely arbitrary schedules on its own… gave me a chuckle

That’s what would happen if I wrote one, hence looking for an existing one

In the mean time, give no great ideas have appeared, I’m going to fashion something using Google Sheets as the UI and a mixture of IFTTT triggers and pistons to do the backend. At least that has OH acceptance criteria of being editable without changing pistons and I can make it look pretty!