Thanks for the quick reply, that is very interesting. Will pricing be similar (~90 dollars)?

I do not have the exact cost at this point, but you can expect the pricing to be similar, yes.

@PhantomZ , I’m just got done reading through your efforts trying to get the Stelpro working with CoRE this in this topic and over in the CoRE discussion as well. Thanks for your work in trying to find a solution. And just so I’m sure where we’re at, right now we don’t have any work around to make it work in CoRE, right? @gouroufui, any chance of Stelpro publicly publishing the DTH for the thermostat so innovative people like @PhantomZ and @ady624 can modify it for use as a custom DTH until Smartthings sees fit to push your publication request?

No, Stelpro is not willing to publish its work publicly.
Especially since a modification is coming down the road to address this very issue.
The release process at SmartThings should be way faster in my opinion, but I guess that’s the price to pay to be on a popular open IOT platform.

Do SmartThings does everything I want stock with these thermostats but Alexa can’t control it stock, is that correct? I need Alexa helper I am assuming.

let me start by saying that I love my Stelpro. Works really well.
My only problem is with the interface in Smartthings. On my Android, I don’t see the arrows for up/down. It’s just empty circles.
On my iPad I do see the arrows inside the circles.

Also, thank you for the support

When I try to change the temp directly with Alexa, I always get a message that the thermostat is in a mode that does not permit those changes. But with Alexa Helper I can do it.
I thought that control of thermostats was native since the last update. But it does not work for me.

This is a known issue since February 2016.
This occured after SmartThings made some changes on the platform
I did a fix shortly after that and asked to publish the modifications.
I’m still waiting for the modification to be released by SmartThings.

@Tyler, @dckirker, could you put some pressure to speed up the release of the Stelpro Ki device handlers?

But just to be clear, should I be able to control my Stelpro Ki device directly through Echo or is the use of Alexa Helper still necessary?

As for your Alexa issue, unfortunately I can’t help you since we did not perform specific testing between the Stelpro Ki Thermostat and Alexa.

So I have no idea what is required to make it work with Alexa.

Fair enough. I will be happy to share my experience with both Alexa and Google Home.

So far I can tell you that with the help of Alexa Helper, you can by voice, control the Stelpro Ki pretty much any way you want.

Are you guys having troubles pairing the new version of those Stelpro? I bought 1 a few weeks ago and it works great so I bought 2 more and just received them. The new version is not Zwave anymore, it’s Zigbee and I am having a hard time establishing communication with the IOS app. In the app, I can find them and set them up but it’s all empty. Like there is no communication between them and the hub.
Any ideas why? 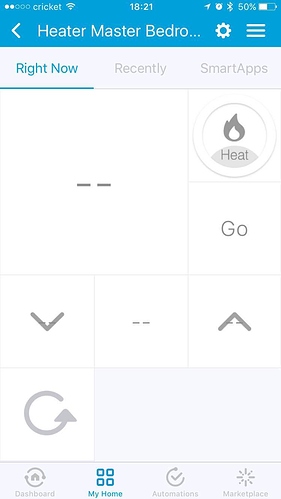 I can’t help with the communication issue, sorry. Where did you buy the new thermostats from? I thought that the part numbers were different, STZW402 for z-wave and STZB402 for the zigbee model.

It looks like there might be an updated z-wave model coming from Stelpro, version: 1.1.1.1.1.5 that will support fan forced electric heaters. The original product version: 1.1.0/1.1.4 did not work on heaters with a fan.

Yes they are the new version STZB402. The very first one I got a few weeks ago is the old version Zwave (STZW402 ) and this one is working perfectly. I will return them and see if I can find the Zwave instead.
Thanksfully, I got them from Amazon so returning them will be easy. You gotta love Amazon for that. Pack it, ship it back, refund on the way. No questions asked.

Thanks for your time Kenny.

since Smartthings support both, are there any advantages is going for the ZigBee model instead of the Z-Wave model?
Will the Z-Wave model continue to be offered and supported?

The ZigBee version of the Stelpro thermostat offers two news features that the Z-Wave version doesn’t.

The Stelpro Z-Wave model is quite popular so Stelpro continues to produce it.
Obviously I won’t share internal trade secrets regarding Stelpro’s future planning.

So I fixed my problem by putting my hands on a pair of Z-wave models. They work like a charm.
Forced fan and off position is not a deal breaker for me so I didn’t want to just wait for an update to be able to control those thermostats.
I will be out of the country for a couple of weeks so it will make a nice difference to get back to a warm house when I turn them on before boarding the plane.

Thanks all for your input.

Any news on the following :

Nope, I’m still in the dark.
They told me that they will try to have it fixed before the end of the year.
Once again, feel free to put some pressure on SmartThings via their customer support.