If you use a relays contacts to drive a low current load you should select a relay with low current rated contacts. (often gold plated)

The ebay relay pointed to is a 10A rated contact. This is not a proper relay to drive a small milliamp/microamp load like the inputs to Some Insteon devices…

While you may get away with it you should not be surprised if it begins to fail over time since the relay contacts are not being “wiped cleaned” by sufficient switching current.

In addition the relays on ebay appeared to be used. If they were used for a higher current load previously you are even more likely to encounter problems then using them to switch a very light load.

Here is a link to an example of the same manufactures model to switch low current loads:
http://us.idec.com/C...ays_And_Sockets

When you specifically search for a 24VAC coil and low current contacts the options are much more limited.
I took some time to find one here ( available at Mouser) that has some interesting specifications under the technical data (contact side) that speaks to how a low current relays ratings change if miss used:

Update, I dropped the bomb and got the Elk-930.

It’s uber expensive, but I wanted it to be reliable and didn’t trust the 24v AC relays given some folks said they didn’t fire all the time and the other issues I am not an expert on.

So far the ELK works great. This seems to be a great turnkey solution for the consumer, it actually has three distinct circuits on a single unit, and two of them are for doorbell. I only need one. I am thinking I should score the board and separate them if anyone wants the phone and the doorbell circuit for 33 bucks…

Note that this solution is for a DIGITAL doorbell (no transformer). If your wired doorbell has a transformer that activates a solenoid (a little rod that strikes a plate to make it go “ding”), you CANNOT connect a dry contact sensor directly.

BUT, this solution works perfectly for me. I used an Aeotec dry contact (https://amazon.com/gp/product/B0155HSUUY), and a simple magnetic contact (https://amazon.com/gp/product/B0009SUF08). I attached the contact to the solenoid housing using the self-adhesive, connected it to the z-wave dry contact sensor and paired with the Smartthings hub. Even a quick press of the doorbell button works.

If you have a wired doorbell system, you cannot wire the Aeotec (or any other dry contact sensor) in parallel with the transformer. These systems keep a small current running at all times and then change the current when the doorbell is pressed. So the dry contact sensor will ALWAYS consider the doorbell button pressed. And IT WILL BURN OUT YOUR TRANSFORMER.

Yes. This works perfectly for me. Here is what I used:

I attached the contact to the solenoid housing using the self-adhesive, connected it to the z-wave dry contact sensor, and paired with the Smartthings hub. Even a quick press of the doorbell button works.

If you have a wired doorbell system, you cannot wire the Aeotec (or any other dry contact sensor) in parallel with the transformer. These systems keep a small current running at all times and then change the current when the doorbell is pressed. So the dry contact sensor will ALWAYS consider the doorbell button pressed. And IT WILL BURN OUT YOUR TRANSFORMER.

Any idea where to find that aoetec dry sensor? Discontinued?

Any Z-wave dry contact sensor will do. Unfortunately, I was able to find only one other comparable product: 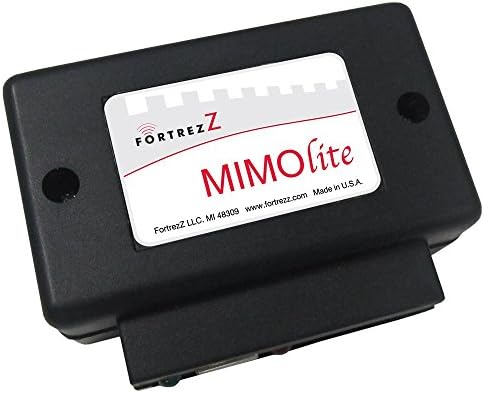 This device is a tad more complicated and bulky in comparison to the simple and small Aeon Labs product, but it should work. It’s designed for both input and output, but you can wire it as a dry contact sensor and ignore the output function.

It also requires a 110V power source for the wall plug power supply. You can locate the MIMOLite near the power source and run the pair of wires to the doorbell chime unit. OR…

The MIMOLite does have one potential advantage: it MAY be suitable to wire directly into your doorbell transformer and eliminate the need for magnetic contacts. It can handle up to 16V input, which most analog doorbell systems use. You might be able to locate the MIMO device near the transformer, which is likely next to its own 110V outlet.

Here is a Smartthings user who says he installed it as a doorbell sensor.

That’s cool. I’ve been wanting to do something similar with a MimoLite. Seeing your pics got me off my (you know what) to try it. It Worked! I just wired the two leads to be power to the MimoLite. And since the mimo can be configured to send notification on power off, it trips a millisecond after the bell riings and power is lost again. What’s nice is it won’t take batteries. Here’s a pic. I have the same bell as @Johnny_Davy and it looks like the plastic box on one side can be cut out to accept the mimo. I’ll post more as I tinker [image]

Here is an Amazon user who says the same.

The Smartthings user shows it wired to the contacts in his doorbell chime unit. I would opt to put in in the attic and wire it to the transformer instead. I haven’t done this myself, so I can’t offer much assurance, but their posts appear credible.

I’m really bummed by Aeon Labs’ decision to discontinue. It’s a great little product that has a lot of uses. That may be the reason third-party sellers have inflated their price to nearly five times the original retail price!

I confirmed through amazon customer that it does have dry post inside the casing. Arrives today, just need to find some wires to use to connect to reed.

Very cool. Be sure to take some pictures and tell about your experience. Others will probably benefit from your solution.

Just installed, any idea as to why doorbell press is not triggering reed? Stays closed /

ok…so you have a reed switch wired to the sensor and inserted deep into the doorbell right next to the solenoid? its hard to see…is that right?

I have the reed shoved in as far as it can go, those are the post sticking out towards the front view. I don’t see a way to remove the center part that contains the coils.

Circled the reed with green marker:

Went to dinner, soon as I get back I’ll try to move it around. Didn’t seem to do the trick when I tried moving it earlier, but wife was rushing me lol so you know it’s hard to troubleshoot when wifey is hungry.

I don’t think that matters…not totally sure, it may go to the strength of the solnoid field, but it wouldn’t be the first place I’d look. Did you try moving the reed switch connection to the “other” end post? Just curios, I think mine is always open, until the bell pushes then it closes.

I never installed the matching trans when I replaced the chime few months back… it’s calling for 10VAC, my old trans is only 5VAC. going to swap it now. I’ve tried putting the reed on both sides.

Cool! That would be great if it works!

Ok swapped trans & squeezed reed directly next to coil… nothing

did you try moving from normally closed to normally open already?