Dual controlled in wall outlet (not a plug-in)?

I am looking for dual controlled in wall outlets. All I can find are some that are no longer available (i bought 5 when i got them) that work with Ewelink, and a lot of 1 controlled/1 always on. I do not want the always on for ALL my outlets. I actually use these in my kids room so that they can’t watch tv late at night or so when grounded I can ‘cut’ power to tvs/game systems and such. As such I dont want to have them just ‘swap’ outlets when it’s off. I also want to be able to control multiple devices in my kitchen and such. I don’t want to add a lot of bulky ‘add on’ devices either.

I don’t care if they are dual controlled together or independently controller either. I have searched a lot but don’t want to commit a lot of money into a bunch of different hubs to make something work in our house.

Are you in the US or the UK? Device selection does vary by region.

In the US, Inovelli does have a plug in zwave pocket socket with two separately controllable smart socket. I don’t know if they’re intending to make a version as an in wall receptacle, though. @Eric_Inovelli May be able to say more. 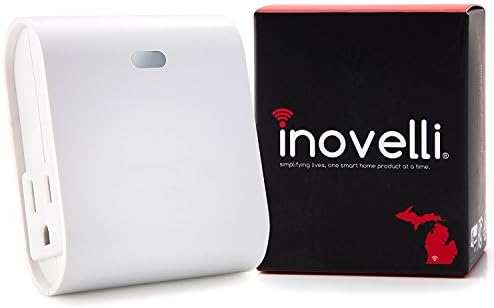 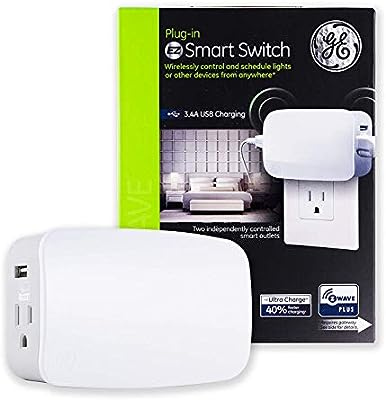 Most of the Z wave in wall micros cannot handle the load required by code for US in wall outlet. They are intended only to control lighting, typically with a maximum of 10 A where US code requires plug-in outlets they have up to 15 A at least.

There is a zigbee in wall micro from SmartenIT , the ZBLC15 , but unfortunately Smartthings does not officially support the zigbee commands required to make dual independent control work.

Turn on your lights when you're not home to deter burglars. Switch on the living room ceiling fan so your home will feel fresh when you come back. Turn off the lamp across the room because you're c...

You can do it with this ZigBee device. I have it connected to a two plug outlet so it switches two 110v AC loads on and off. You will have to write a custom device type that is aware of this plugs two on/off end nodes. I have one written and it works great in my SmartThings app would be happy to share if it helps. http://smartenit.com/product/zblc15/

All three of these would require custom code, they don’t work out of the box with SmartThings because of the multi channel aspect.

I personally use the ConnectSense plug-in, which I really like, but it works with HomeKit, not smartthings. With the ConnectSense Smart Outlet², controlling and monitoring the power usage in your home has never been easier. Paired with Amazon Alexa, Apple HomeKit or Google Assistant you can control your lamps, fans or other appliances with the power of...

IDevices has released an inwall outlet where each socket is independently addressed. It doesn’t work directly with SmartThings, but you can get integration through IFTTT. (It also works with HomeKit.) but it’s expensive.

Yay! iDevices has finally added an IFTTT channel. And it’s two-way. So you can finally integrate iDevices inwall outlet and outdoor pocketsocket with SmartThings.

These devices are expensive, but have features that some others don’t (like a two socket outdoor pocket-socket, although they turn on and off together, not independently) and also work with HomeKit for those looking for devices that work with both. [IMG_5736] The two sockets on the indoor wall receptacle can be controlled independently.

I do expect to see some zwave outlets with this option once the series 7 devices start hitting the market, but that might not be until mid 2020.

If you aren’t already using ST, Insteon makes a plug like that - I was planning on doing this before I settled on SmartThings. https://www.insteon.com/on-off-outlet/

If you aren’t already using ST, Insteon makes a plug like that - I was planning on doing this before I settled on SmartThings. https://www.insteon.com/on-off-outlet/

@MarkTr Brings up a good point. This forum is for people who are using the Samsung smartthings home automation platform, so all of the answers that you get will be in that context and assume that you have a smartthings hub. Because it’s a very active forum, it tends to come up near the top of Google searches for home automation topics, but it is specific to that particular hub. So it may not be what you were looking for.

I am wanting to use the smart things hub. I just don’t want to set it up if there isn’t a way to do what i want. I also don’t want multiple hubs running my house.

I am wanting to use the smart things hub. I just don’t want to set it up if there isn’t a way to do what i want. I also don’t want multiple hubs running my house.

Are you in the US?

Yes. I am in the US.Though i do actually have some 220 UK outlets in my kitchen.

Yes. I am in the US.Though i do actually have some 220 UK outlets in my kitchen.

US 220v outlets , Typically for large appliances, are wired differently then the 230 V systems in the UK. UK systems use ring mains, deliver the same 13A amperage to each outlet, and assume that there is a fuse built into every appliance cord. None of that applies to a US residential system. You just mean regular US 220 V outlets, correct?

We split the kitchen to have UK 220v outlets. They are on their own breaker. I use them for European appliances.

We split the kitchen to have UK 220v outlets. They are on their own breaker. I use them for European appliances.

For UK wired sockets, you can use lightwave RF generation 2 with the free IFTTT service to interface with a number of other home automation systems, including smart things. That does mean that the Internet has to be working in order for the integration to work as it is cloud to cloud. But I have no idea if they would meet local safety codes as they are intended for UK use. And they are not available in a regular US style.

So that wouldn’t be relevant to most people, but in your unusual set up it’s just something to be aware of.

To go back to your original question…

So the short answer is there isn’t anything that works easily with smartthings in the US at the present time that can control both receptacles in an in wall outlet.

There are some dual zwave micros, but they don’t meet US specs for an outlet as they typically only support up to 10 A and US code almost everywhere requires at least 15A for an outlet. So they can work well for a light switch, but not the in wall receptacle.

Zigbee in wall dual micro from smartenIT that I mentioned might work with SmartThings, as it did at one time, but there have been a lot of changes since then and I don’t know of anyone currently using it. It’s a bit risky as the platform itself is changing and I’m not sure if it will be supported in the future. So you could look at that one with its own hub. But that has a limited set of devices.

As far as other platforms, as mentioned above Insteon makes a model that would work, but that would require their hub.

There are several HomeKit models now available with the features you’re looking for. You don’t need a special hub for those, but you do need either one Apple TV or one iPad or one HomePod so you can set up the automations. If you already use Apple devices, this can be a good choice, but if you only have android phones and tablets then it’s probably not worth it.

There are some ewelink Wi-Fi outlets at Amazon that work with Alexa, so you should be able to find at least one. Many of those are Chinese and do not have US safety certifications, though, so I personally wouldn’t use them for in wall receptacles. But that’s obviously an individual choice.

Sorry not to be more help. Most people with a smartthings hub just use the plug-in modules, but I understand that doesn’t match your requirements.

I imagine you found a solution for your own project by now, but for people who find this thread in the future because of the topic title, there is now a new option.

IDevices has a Wi-Fi outlet, in wall, which has always had two independently controlled sockets, but which did not have any integration with smartthings, although it did with HomeKit.

Anyway, in December 2018 they added an IFTTT channel with two way status, so it can now be used to integrate with smartThings if you are OK with cloud to cloud.

These are well engineered devices which often have features competitors do not, but they do tend to be somewhat more expensive. Still, worth considering, particularly for those who want devices that work with both smartthings and HomeKit.

. ( The HomeKit integration is local, so if you do use iOS devices, that gives you a good backup for times when the smartthings cloud is not available.)

Yay! iDevices has finally added an IFTTT channel. And it’s two-way. So you can finally integrate iDevices inwall outlet and outdoor pocketsocket with SmartThings.

These devices are expensive, but have features that some others don’t (like a two socket outdoor pocket-socket, although they turn on and off together, not independently) and also work with HomeKit for those looking for devices that work with both. [IMG_5736] The two sockets on the indoor wall receptacle can be controlled independently. 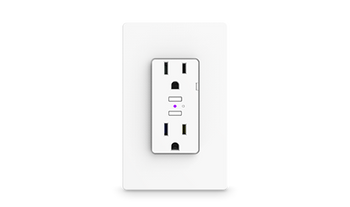 Experience the sophisticated design of the iDevices Wall Outlet – the only HomeKit™, Alexa and Google Home compatible in-wall solution available that doesn’t require a hub.

IDevices also has a battery operated Bluetooth accessory switch. You can’t use it on its own, it won’t be visible to smartthings, but you can pair it with the outlet so you have a wall switch for that outlet, which is a nice feature also. Again, not cheap, but well made with advanced features.

How about the Aeotec Dual Nano Switch? I just hooked up a nano switch to a dumb receptacle. The dual would give you the ability to control each plug independently.

How about the Aeotec Dual Nano Switch? I just hooked up a nano switch to a dumb receptacle. The dual would give you the ability to control each plug independently.

If you are in Europe, that will probably work fine, Since most regular in wall outlets there are 10 A or lower.

The dual nano does not meet US code requirements for load, which is 15 A for a regular in wall receptacle. The Aeotec is only rated for 6.5 A per socket, or 10 A total. That should be fine for behind a light switch, but not behind an outlet in the US.

The outlet examples on the Aeotec site are all for European outlets.

Thanks. That is something that I did not consider. Maybe he can fit 2 nano switches in the box. They are good for 15A in the US.