With the RC2 of J64 AlarmServer, I am experiencing a minor issue when I go to the alarm system in Things, and then clicking on “recently”. I see events like “alarm system is armed” and “alarm system is disarmed” every 3-4 minutes, even though I know the alarm is currently in an armed state and there is no movement on any of the zones. 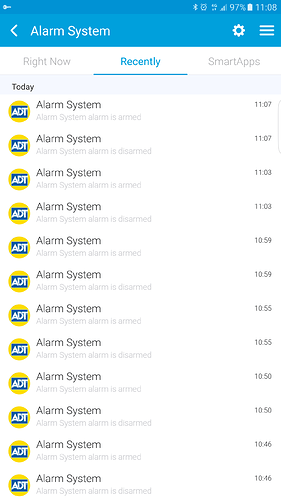 Are these methods of integrating envisalink with smartthings still valid?

I have alarmserver running just fine, I can access the api and it’s own web interface but I just can’t get the smartthings app connecting (or so it seems). The logging is not that great so it’s a bit of a crapshoot.

Did anyone have issues with the instructions for oAuth and getting APPID etc… Seems like the URLs provided may have changed over the years.

I have just integrated “DSC PC1616 - EnvisaLink 4 - alarmserver - SmartThings Hub v2” successfully, using some of the many instructions, code and hints available. I ended up in this thread here because I had a problem that even I could receive the events from DSC I could not send any commands to the DSC, however the root cause to my problem turned out to be different than what I have found elsewhere, so I thought I would share my findings in case someone else run into the same problem.

First, for the oAuth and AppId I found the instructions to be working (but the process is definitely not user friendly), except I had to use hostname graph-na02-useast1.api.smartthings.com, I guess that depends on which cloud is handling your ST account. Once the IDs and secret were correct I did not have any issues making the alarmserver connect to ST and my configured DSC panel and zones were immediately added automatically as devices in the ST app and I started to receive events. Do be able to control your DSC panel via ST be sure the alarmserver is configured for HTTP (not HTTPS) to use locally between the Hub and the alarmserver (the connection from the alarmserver to the ST cloud will still be HTTPS) and be sure you specify the correct local IP address and port number of the alarmserver (not the EnvisaLink 4) in the DSC Integration SmartApp.

My main problem was that even I saw “Incoming web connection from” from the Hub in the alarmserver log when sending a command from the app I never saw any HTTP GET request when checking tcpdump on the alarmserver, so no codes were send to DSC. I finally tried to make an external packet capture on the Hub side as well and here I noticed that after the Hub has completed the TCP handshake it is sending an ARP request for the alarmservers IP. In my topology the Hub and the alarmserver were not in the same subnet, but can reach each other to each of their default gateways, so the Hub is sending an ARP request for an IP that is outside its own subnet. This looks like a bug for me, it might be per design that the Hub only support to communicate HTTP with hosts in same subnet (which I am sure will be the case for 99% of the users), but I find it very stange why TCP handshake would be working between different subnets and then the HTTP is only working in same layer 2 domain. After I moved my Hub to be in the same subnet as my alarmserver everything started working perfectly.

I am pretty new at this and struggling at the point of the DNU restore. I have tried on two machines, but get similar results. “Netstandard 1.5” is an unsupported framework.

I have the same problem, something, I arm my system and after 4 minutes, he disarm? 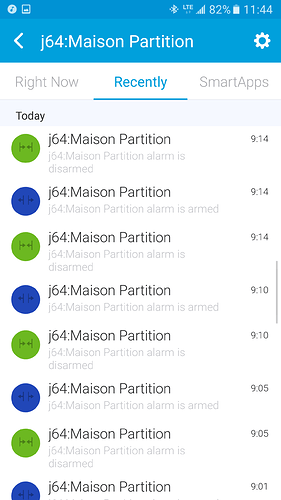 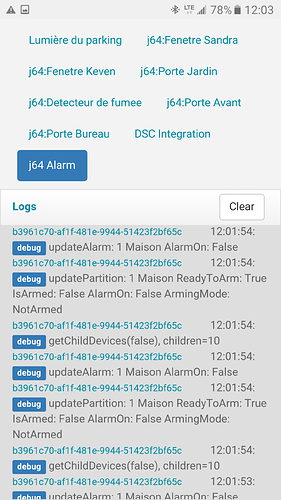 How did u integrate u alarm with smart things

For DSC, this thread was the clearest method. Easy and straight forward. The App generates all of the devices.

Follow instructions and you should have it up and running within an hour.

There are a million threads about this, and I figured I should start my own. I’ve compiled code from 3-4 people here and will give them credit. This set up allows arm/disarm via local LAN so you do not have to worry about https, security, and port forwarding. It creates all devices, you only need device types for contact, motion, smoke, and co2. Very simple, and easy. If you have a raspberry pi you can host alarmserver on it and have this running much much quicker and easier than any other dsc integration method. This is from @sanity, @xero, @ethomasii, @jtt, @rfish8u, @mattmartz, and countless others I"ll name as I remember. If you’re experienced in setting this up you can skip directly to the devices, smartapp, and alarmserver and be good to go. For new users, view the advanced r…

I’m running a synology, but where does the docker container put the config file so that I can edit it? I can ssh in, but can’t seem to find the file in any of the directory structures. I’m assuming that is because of the docker structure, but don’t know where to look.

Otherwise, does anyone have decent instructions on how to install alarmserver on a synology for a Linux noob? I’m barely literate with Linux… @gabe973 @rog ?

This is off the top of my head but it should work.

SSH into the Nas and run the following commands

I don’t have any trouble getting the docker image to run, but I can’t locate the alarmserver.cfg file when its installed that way… I did a search for every wildcard version of it I can imagine, but can’t find a file even remotely named like that… I’m guessing it is inside the docker container folder somewhere…?

Actually I’m pretty sure I tried your Docker as well since it was listed in the registry. I’m probably missing something easy but most of my other docker containers have a mounted path for the config file. I mounted a config path just in case, but it isn’t there and if I put the config there I don’t think I could edit the .py to point it to that path…?

Update - can it be edited once it is running with the config option? It says I can’t edit config without logging in as admin, but I don’t want to spend the time gathering the password if that config option isn’t what I’m looking for… It runs and I can communicate with it, but without the config info it doesn’t interface with ST…

Well I don’t have it running in a persistent state yet, but here was the initial output when I did get it running on my synology. Somehow, I think I jumped threads as this is the EVL-4 DSC integration from the other thread just so no one spins their wheels. If it is something obvious please shout out, but I’ll post in the other thread as well. My apologies.

(yes I xxxx’d out the installations and tokens)

I have everything up and smartthings talking to DSC via the j64 alarm server. I used the j64 docker on my QNAP SAN and it works as advertised.

My question is how to have the alarm go into arm or disarmed based on presence? Smarthings will change SHM arm and disarm via presence but that value doesn’t reflect in the j64 alarm smartapp. The j64 smartapp will tell SHM to arm or disarm but not vice versa.

Hi all! I’ve been trying to get Alarmserver set-up to work with Smartthings for nearly a week and not making a lot of progress. I’ve got Alarmserver up and running and talking to my DSC 1832 panel via an Envisalink 4. That bit was easy. Getting it set-up with Smartthings has proved pretty troublesome.

I’ve tried LXXero’s smartthings app but no matter what I try I cannot get the RestApi Oath to work.

I’ve gone back to Kholloway’s original build and can get the RestApi Oath working fine, but can’t seem to get devices set-up and reporting via the Smartthings app.

I’m no programmer but can usually figure these things out but I’m beat. I’d love to have all my alarm sensors visible via Smartthings and be able to arm / disarm via the app.

Does anyone recognise these issues and have any suggestions on what I try next?

Is there a different build I should work with rather than the two above?

Could the CoRE Piston smartapp maybe work for you to arm and disarm using
routines?

Thanks for the suggestion, I installed core and have 3 pistons now automatically arming and disarming for me based on our location.

Which panel device did you install? How did you set the device to look at the smart app?

Chris, it’s been so long since I set this up I have switched to a new system. I don’t recall. Sorry.

What system are you using now?

Folks, I REALLY could use some help here…I’m new to ST and lost. Using Joe64’s app, I’m fully stuck on the server component. I’m trying to install .NET Core on my Windows 10 PC. When I go to get.asp.net I get a choice of the full .net Framework (4.6.5) or the .NET Core SDK or Runtimes, which of those three options am I suppose to choose?

I initially started with the .NET Core Download (1.1.0) but could not get the DNVM command recognized as show in the instructions. After a lot of messing around I seemed to get DNVM installed by installing the entire (5GB) Visual Studio 2015.

With DNVM installed, I also got DNU and DNX installed, however when I run them I get the same exact issue as @Alan_Coe in post 423 above, “Netstandard 1.5” is an unsupported framework.

I’m stuck…could really use a hand from someone that understands .NET far better than I. Thanks for any assistance.