I have a Honeywell Vista 20p. I spun up MattTW’s version of alarmserver on a Pi 4 last night. I was able to get it running succesfully for api calls. I have not yet integrated into smartthings. It got pretty confusing keeping track of all the different options, and I’m not sure which options are compatible with the honeywell version of alarmserver. As I’m starting fresh, which integration option can I use for Smartthings?

If you have a Honeywell Vista - you want this branch:

Hint: skip to the bottom and catch up then read through the thread to find the parts you need.

Coincidently, I just heard from someone who is working getting the direct connect package (not yet alarmserver stuff) working inside a docker container! We’re working through some issues he’s having so far, but I’ll get some learnings from that.

I had some free time this weekend so I did some updates to the DSC panel devices. With custom capabilities now working with automations, I managed to fix my capabilities used by the DSC panel devices to have working automations. This should made it also easier to sync the STH panel. I also added an animated lock icon for the dashboard, and fixed the sending of a double Arm Stay, which was resulting in an annoying long beep…

I also have been running newer version of AlarmServer for the past while on my systems, and added it to the repo also. 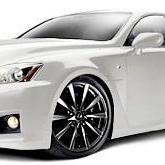 Ralph - just to clarify - the updated Alarmserver is NOT REQUIRED, but optional. Correct?

Correct, all the calls to AlarmServer are the same.

The new one I upload does a bit more error checking, fixes some minor problems, and has a new TIMETOWAIT variable in case you want/need to change the amount of time AlarmServer waits for a response from SmartThings after sending a POST (it will then try again if SmartThings does not acknowledge it received the command).

I’ve testing this version on both my Windows and Ubuntu systems for the past few weeks with no problems.

Just to add, I updated all the devices now so that bypass now works (yeah, SmartThings fixed the switch finally), and trouble status also now working better. Also, automations (conditions) can be used.

My smartthings DSC Alarm part stops working recently. I can’t arm/disarm from smartthings: if I use STHM panel buttons to arm/disarm, the highlight will move from one to another but does nothing to the alarm; if I use the virtual switches (DSC Away Panel & DSC Stay Panel), they simply won’t turn on. However, when I physically use alarm keypad to arm/disarm the alarm system, the alarm status will change accordingly in STHM. Looks like it syncs from physical keypad to smartthings but not other way around.

I checked alarmserver running on my Pi and it reports all the sensor activities correctly. Checked Webcore logs and seems no issues either. The only thing I changed recently is my actiontiles password, I have since changed it back.

Any idea what can be the problem? Thanks in advance for any help.

I’m using the latest version of the smart app and it has sync with Smartthings but I still think it’s only one way. IIRC, if you change state in STHM, it will set the panel, but you need automations to have changes at the panel reflected in STHM.

Thanks a lot for your response. I did have STHM sync setup (I believe 6 of them) and it’s been working great for a while. I had to setup those automations since Samsung retired the old ST app. I have been using the alarm status and sensors for a lot of automations (lights/switches/TVs/sonos) but now all won’t trigger.

It suddenly stopped working a couple of days ago and I couldn’t figure out why. I only changed actiontiles password (I remember AT needs to be there for the sync) but have changed back since.

I tried other ways such as “EyezOn ST Switches” to work around without success.

Thanks again for trying to help me out!

If you are using automations for everything then start there. Add a virtual switch in IDE and make it an additional trigger for the automations. Then add it to each automation individually and test manually triggering them.

Most of the time I see something in the automation that is preventing a trigger like mode checking or time of day checking.

Thanks for the kind advise…After unplug/plug everything, router, switch, raspberry pi, ST hub…it is working again and I don’t know why.

@rtorch Need your help. With the new updates to the SmartApp and Devices Handlers, my STHM in the ST ios app is going wacky:
If I hit one button it will actually turn on the others. i.e if I hit “ARM Stay” it will go to "Arm Stay "and then a second later to “Arm Away”, then few seconds later it will go to “Disarmed”. The panel seems to be going to the first button I selected, but STHM goes wacky and cycles through those other buttons.

I have reset my Hub, but no change. Last working was the Oct 2020 version and hasn’t had problems until I upgraded these. I tried going back to those older version but this problem still exists

Do you have any automations setup that control or sync with SHM?

Yes @rtorch
I have the same automations that update STHM when the alarm is turned on/off from the DSC itself. I’ve tried turn those off and still the same issue. 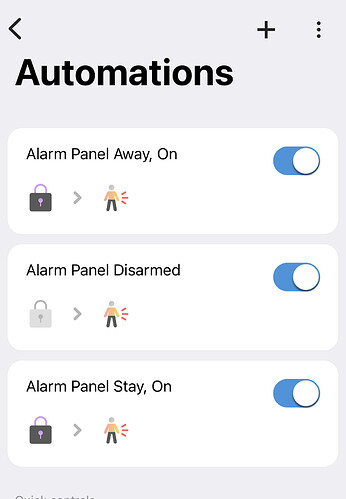 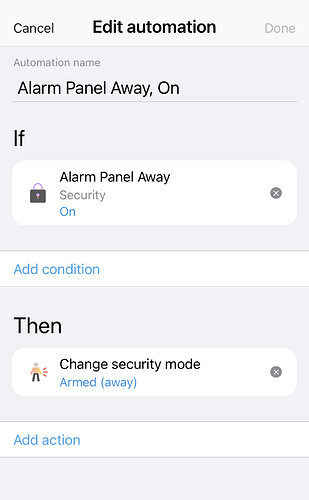 Chabge thr virtual switches involved in these automations form the ‘virtual switch’ DTH to ‘Simulated Switch’ short version, the behavior of virtual switch is different in newapp and can cause a race condition when theres a loop like a two way sync.

thanks for the reply. Those aren’t virtual switches. One is the DSC Alarm type handler and the other is the actual alarm security mode of the STHM monitoring app.

@nathancu is correct, your automations will cause a race condition. I tried the same thing and it doesn’t work.

If I understand correctly, you updated all the DTH and SmartApp to the latest, correct? If so, go into the DSC-Envisalink SmartApp, verify all is the same and then save the settings. Then stop and restart AlarmSever that you are running. This should fix it. Let me know how it turns out.

Thanks all and @rtorch Still not working and same problem(s).

I turned off the Automations as suggested – and of course that now means that if the alarm is turned on/off physically on the alarm keyboard that STHM won’t be updated, as seen: 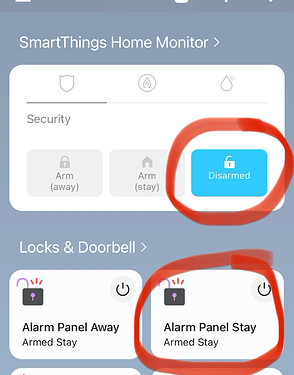 I doubled checked latest DTH and Smartapp, verified and saved settings in the ios smart app in ST. Both Stay and Away switches will turn on when one is selected, even though the resulting status is correct (Stay or Away) 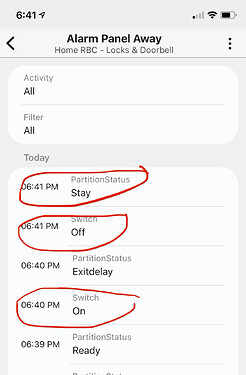 It didn’t behave that this previously. Away and Stay should be separate devices and not turn each other’s SWITCH on, esp after I’ve removed all ST App Automations per above

I turned off the Automations as suggested – and of course that now means that if the alarm is turned on/off physically on the alarm keyboard that STHM won’t be updated, as seen:

Unfortunately, you need to re-do the automations if you want to keep the SHM in sync. One suggestion is you maybe able to use the partition status to keep things in sync: 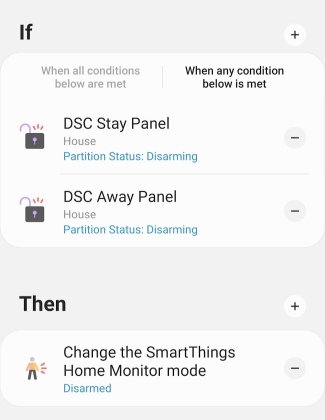 I doubled checked latest DTH and Smartapp, verified and saved settings in the ios smart app in ST. Both Stay and Away switches will turn on when one is selected, even though the resulting status is correct (Stay or Away)

It didn’t behave that this previously. Away and Stay should be separate devices and not turn each other’s SWITCH on, esp after I’ve removed all ST App Automations per above

It has always behaved this way, as each one shows the status of the DSC panel. The separate Stay and Away dates back to the original version, and was done this way to allow automations to set either the Stay or Away. With the new ST app and the changes I have made, you can select different commands from automations, which was never possible previously. I have kept these two panels as it makes it easier to set Away or Stay from the main dashboard of the ST app.

BTW, I find it strange that your iOS app does not show the lock icon in the locked position when armed. I don’t have any iOS devices so I can’t test it out. But this is what it should be like: