will allow you to turn it on again if you manually type the code in the panel and not turn it off in the app?

It should. The routine “Goodbye!” is set to turn the switch (DSC Alarm Button) to the on position, regardless of what it is currently set to. I have an “I’m Back!” routine that does just the opposite, turns the selected lights on and the DSC Alarm button to off, again it will try to flip the button to the off regardless of the real state of the alarm system.

awesome thanks for the screen shots. so smart home monitor is tied to a mode of the home? i didnt realize that i guess with the new app. i have goodnight to automatically arm stay mode each night, and goodbye to arm when everyone leaves like yours does. i guess i have to update my actions since the new app/hub came out.

What I haven’t figured out yet is how to have the DSC update Smart Home Monitor’s away/stay/disarmed state.

There are several SmartApps that will perform an action when the state of the SHM’s arming status changes. I’m not interested in using my phone to arm and disarm the alarm, I’ve got remotes in the car for arming, and disarming at the keypad is a requirement.

Hey guys, not sure if this will help any of you but I found a little trick for monitoring my Honeywell hardwired alarm with my ST hub.

I have ordered 3 of the Ecolink Door/Window sensors from here, and they are currently on sale for around 25 dollars a piece. They are Z-wave and on the ‘approved’ list of things that play nicely with ST hubs. Best thing is that they ALSO have a header
inside the unit where you can use hardwired reed switches found on wired home alarm systems. You can create different ‘zones’ such as multiple windows, and seperate door zones etc. if you like. You can use any of the prewired reed switches already hidden in your door and window frames (during home construction typically)…
This setup is easier for a ‘dead’ alarm system, or one that is not completely setup from the original installer. Mine is a Honeywell/Brinks system.

This video shows the header I am speaking of:

Hi everyone, I’ve been working with @mhatrey on his SmartApp to integrate Honeywell alarm systems with ST through the TotalConnect connection. I am VERY motivated to get this working, and am willing to pay for any help we can get. However, Yogesh doesn’t have much time to devote to the project; hence, my reaching out to users in this thread.

It seems @jason3fc @ethomasii @rfish8u all have some significant experience on this front so I’m wondering if you guys would consider helping? Again, I am willing to pay for help because it is an important project for me.

If I had a Honeywell system, then id be up for it… since I do not, I think it would be difficult to develop for the device blindly.

I haven’t looked into the SmartApp that @mhatrey is developing, but I wrote the first devicetype for the Honeywell Wi-Fi thermostats at https://github.com/ethomasii/honeywell-smartthings that may be of help for you since it works via TotalConnect.

Understood. Really appreciate the response! It actually looks like a few other guys have been trying to work on it a little more. They may need some help, though. Perhaps you could review the last few posts and chime in if your experience with the Honeywell T-stat is applicable?

Hey gang. My apologies as I didnt read through the entire thread just yet (quite extensive stuff but I plan to). I have Smartthings v2 and a DSC 5010 panel. I am trying to see what is needed in order to get zwave access. From my reading I saw the Envisalink EVL-3 and the EVL-4. They both are compatible with my unit however I am not sure if my panel will suffice. I called DSC and I am trying to discern from the info and them just trying to sell me on stuff. They mentioned I would need the 1832 panel to get zwave support. They also mentioned the IT100 unit. Lastly, I am also trying to get the module that allows me to use a cellular service instead of a landline. (would consider voip too)

With that said my questions are:

Ultimately I am trying to reuse the dozens of hardwired sensors already in my house instead of having to buy all new sensors.

I know this is the ST forum and a lot of what I’m asking is outside of that realm but figured you all might have some insight. Thanks!!

I really have no information or experience with Envisalink, but I can say that the IT-100 is similar to it but it is a serial interface. So it requires other equipment to get it talking to something.

I just got an EVL4 a few weeks ago. I have a 5020 but will be replacing it with an 1832 so I can get a newer fancy keypad, but it should work fine with 5010. Since the zwave “integration” is basically middleware with you running alarmserver making status event-driven callbacks (open/close/armed/disarmed etc) to the ST API or your app telling your hub to directly send messages to the EVL4 proxy port to issue commands to the panel, your panel shouldn’t need changing because this technically works the same way regardless of panel. If you run into issues, I found that the eyez-on guys are actually friendly and willing to help troubleshoot.

Any other modules you consider getting shouldn’t really have anything to do with the Envisalink device because as far as the panel is concerned, Envisalink is basically just another keypad.

EVL4 vs EVL3 changes are minor: it supports larger panels and links up at 100Mbit instead of 10. And as @jason3fc mentioned, the IT100 is a serial version so it’d be connected to another device like a pi whereas the EVL4 is a standalone device on your network.

Fellow 5010 owner here as well. I’ve had this setup since mid sept and it’s been flawless. I’m using the evl3 and running alarmserver on my surveillance server. Its a bit of work to get going but we’ll worth it. I have all 14 of my hard wired zones integrated with ST, all are being monitored by SHM and I can use any motion or contact to do whatever I want. Arm/disarm, alarm stay, panic, chime on/off can all be controlled from ST. Like mentioned above alarmserver will need to run 24/7.

A bit off your topic since it’s been a few years. I have an older DSC hardwired system. Would you suggest the IT-120 or the EVL-3 - Envisalink to be able to use the existing sensors,etc…?

Also, is there an updated link of all of the systems that would work once I put the IT-120 card in?

Afaik, IT-120 uses different protocol and is more expensive than Envisalink. I’m not aware of any integrations compatible with IT-120.

@allanak and @2l82try1
Thank you for your responses. For the alarmserver what devices are you using to run this? Like an old phone or tablet and leave it connected 24/7? Or can this run on your PC somehow? Also perhaps I missed this but will the EVL4 + alarmserver be able to see all of the door and window sensors in my home? Arming and disarming is super important but I think the individual sensors is where I would get the most value (and if tripped of course)

Lastly, for Allan, what keypad were you going with? I am debating upgrading my panel while I am doing this to get a new keypad as well and as mentioned before, would like to do Voip or cellular services as well. I think the 1832 may fair better in this regard. Thanks

I have alarmserver running on a raspberry pi sitting up in my utility closet with the rest of my network equipment. Alarmserver is basically just a python script, so I assume it could run on Windows or anything dedicated if you’re not so linux inclined. Basically, alarmserver gets status updates from the panel via the EVL-4 over your network. Alarmserver relays the status messages of your DSC sensors to the SmartThings API, so its one way in that sense. You can’t have your alarm monitor your zwave sensors.

Now, about the keypad question: long story short, I wound up buying an RFK5501 because I needed an RF receiver…I regret my choice. No LCD feedback makes its a hassle to program. Typing in over a dozen hexadecimal ESN codes for the receivers was a project. I feel like after fully programming this thing twice (once with the 5020 panel and a second time when my 5132 arrived), I can go work for ADT if I ever want a career change.

When I get around to it, I will probably snag a PTK5507 keypad and an RF5132 receiver since it seems they don’t include RF receivers in the newer keypads.

@Allanak - Haaa I hear you on the “going to work for ADT” thing. I use 5500 Keypad - but still agree. I know all those ridiculous codes backwards and forwards now for all the times I have reprogrammed it.

It looks like after trying to get the IT-100 and arduino working for so long, I just finally caved in and got an EVL-4. I really hate having to run alarmserver in addition, but as you said it can run on a Pi or something I can just keep in the closet.

Looks like Im about to finally get this thing going tomorrow as well now.

I built a server running windows for my cameras awhile back so I’m using alarmserver on that as it runs 24/7. All of your sensors will b available to use for whatever you want. This is what my SHM looks like with all the dsc sensors. 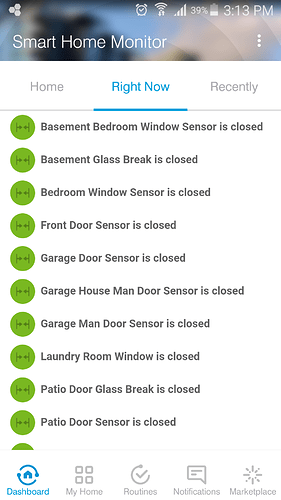 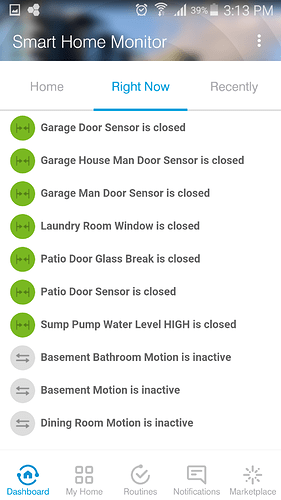 Not sure who else has done it but I got alarmserver running on my Synology NAS pretty easily. Its working great.

I have a Synology NAS too. Would you share what you did?