I had to disconnect my doorbell because my dog loses her mind (in a happy way) when it rings. One actually went through the glass on the storm door when the mail lady rang the bell. Which required lots of stitches and an impassioned plea to the post office for them to continue to deliver my mail. But I digress…

Friends and family know the doorbell doesn’t work, and they text or call when they arrive. Delivery people don’t know the doorbell had been disconnected so they leave the package, ring the non-operating doorbell, and leave. Which means the package sits there until I realize it might have arrived and go get it or someone steals it. Here’s the solution I’m considering.

Buy an EcoLink DWZWAVE2-ECO, remove the doorbell and the transformer from the equation, and attached the two door bell wires to the dry contacts in the EcoLink sensor. I’m hoping that the sensor will change state when the doorbell is pushed and I can use WebCoRE to either flash some lights, change the color of a RGBW light, or send a push notification. Note that I don’t need (or want) the existing doorbell to chime. I just need to be able to use WebCoRE to react to a state change on the EcoLink.

Is anyone use the EcoLink in a similar fashion? My solution almost seems too easy to actually work. Thoughts?

Many people have done something similar, in fact I would say that in 2014 and early 2015 it was the most common doorbell hack. other people usually left the doorbell chime itself working as well, because I can tell you that otherwise people are going to lean on the button when they don’t hear it. But I understand why you don’t want it. You may want to consider eventually having the porch light blink as well as that will often keep people from pushing the button over and over.

Anyway, check the quick browse lists in the community – created wiki under project reports. There’s a “doorbell” list there that has a lot of threads on different variations.

Not sure if you have looked at Skybell. With the device you can enable or disable your door bell chime. You will still get notified and since it integrates with ST, you could have lights to come on or flash etc using CoRE

I am just kidding

- I have the same problem however my dog is too small to cause any real damage.

Mutt muffs are great! I know lots of people who use them for search and rescue dogs for helicopter rides. You have to get the dog used to it ahead of time, and it isn’t something I’d use every day, but a great product.

As far as the dogs, my concern is that even if there’s no doorbell they’ll still do the same going bananas behavior when somebody comes to the door and knocks. Maybe not, and you can try and see, but that would be my guess.

For what it’s worth, again with service dogs we train them to do the same behavior that a hearing dog for a deaf person would do even if the person isn’t deaf. That is, the dog is trained to go to the door, looks out and see the person, barks once or twice, then runs to their handler and does an alert behavior, then walks back with the handler to the door.

This does three things.

One) it gives the dog something to do when there’s a person at the door rather than just stay there and go crazy.

Two) it shifts the dog’s attention from the person outside the door to their handler.

It can take about two months to train a dog to do this reliably, but once they know it, you have solved the problem for all time, and you also solve it even if you are in a different building. So it’s worth considering.

It’s a pretty easy schedule to teach most dog’s because you are using the dog’s natural inclinations to alert you rather than just to guard the door. The dog gets to run to you (away from the door) which uses up some energy, but after that everything is a control behavior so they are under Control by the time you get back to the door. And again emphasizes to the dog that you the human are going to deal with the issue, all they have to do is let you know that the person is there.

Donna Hill has great free videos on how to train this skill. Here’s the end result:

And here’s the two pre-requisite skills. The one-way alert:

And the show me (shell game)

And here’s the list of all of her free videos, including tricks and dog sports:

This is a list of all my YT dog training videos.

By the way, no idea is a dumb idea if it works for you. There’s a whole lot of ingenious ideas out there that people would have considered dumb at first but did not have the vision.

Why in the world would anyone want to text?

Buy an EcoLink DWZWAVE2-ECO, remove the doorbell and the transformer from the equation, and attached the two door bell wires to the dry contacts in the EcoLink sensor. I’m hoping that the sensor will change state when the doorbell is pushed and …

Wait, what? Can someone explain how this works? How does the sensor state change if you remove the doorbell? Or did you keep the “dumb” doorbell button and just hook up the sensor to something on the inside, e.g., at the (former) chime or transformer locations? I’m wondering if I could rig something like this to work for me, but my problem is that my transformer is dead and I have no idea where it is located.

I’m currently cheating the whole system and using a square Xiaomi button mounted on my doorframe. But something more intuitive for guests might be nice.

I am going to remove the wires that run from the existing doorbell button to the transformer and attached them to the two contacts inside the Ecolink open/close sensor instead of the transformer. When the doorbell button is pressed it should cause the sensor to momentarily change to a closed state. I created a WebCoRE piston that sends me a push notification, changes a light in my kitchen to a different color, and flashes it a few times if a sensor changes state, and I’ll use that to monitor the Ecolink. I can’t think of any reason it won’t work but the sensor arrives today so I’ll know tomorrow. Btw, I had to hunt for my transformer as well. I found it in the attic buried under a bunch of insulation.

But something more intuitive for guests might be nice.

If you want a single battery operated device that will look like a doorbell but just communicate wirelessly to the SmartThings hub, I think the Aeotec keyfob panic button mounted in a box frame would meet most visitors’ expectations of what a doorbell looks like.

You will have to take it down to change the battery every 6 months. But other than that inconvenience, it’s a quick and easy solution for the intuitive button piece.

Of course you still have to decide what you want to use to make a sound if you want a sound. But since the OP in this thread is looking for a silent doorbell anyway, this is just an easy alternative to consider as well.

And it’s also sold on the UK frequency: 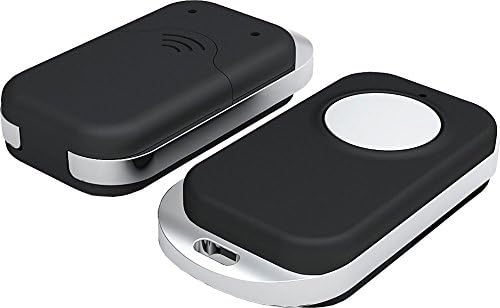