Do battery powered devices I.E. motion sensors and door sensors have to talk directly to the hub?

Do battery powered devices I.E. motion sensors and door sensors have to talk directly to the hub or will other devices relay the signal back to the hub?

This is for “Gocontrol” motion and door sensors and Ecolink. Thanks

Other mains-powered devices will relay the signal back.

If you are moving things around, make sure you run a Zwave repair (if you have Zwave devices) so they can re-calculate their signal route.

Devices that are NOT battery powered will act as a relay on a zigbee and zwave network. So a motion sensor and door contact can hop on one of those relays first before getting to the hub.

Hope that answers your question

Since the motion detectors only report when they are triggered, how does it update the route during the Zwave repair process?

My assumption was the hub “pinged” each device during that process but I don’t think the window/door sensors or motion sensors can be “pinged” by the hub?

I don’t know the exact details of how it works, but I know that each device is requested to reach back to the hub to update the address tables (where it is in relation to the other z-wave devices the hub can see).

Both zwave and Zigbee battery powered motion sensors on a SmartThings network are using a “mesh” topology.

Each device keeps its own partial address table

In a mesh network, each device keeps its own partial address table which lists its nearest neighbors who are able to repeat messages (that is, relay them on to another device). This includes pretty much all mains-powered devices except for smoke alarms. So light switches, in wall receptacles, relays, pocket sockets, mains powered motion sensors, some lightbulbs, etc.

Sending the message from the sensor–the Pony Express in action

Now comes the part you asked about – – sending the actual message. When the sensor wants to send the message it looks at its address table to see if the hub itself is one of its nearest repeater neighbors. If so, it just sends the hub the message directly.

So it basically works like the pony express: a device passes the message on to the repeating device that is farthest away from it, and then that device carries the message as far as it can and then passes it on to another “rider” and so on until it reaches its destination.

This is true for both messages coming into the hub and messages going out from the hub.

Because each device only has the addresses of its nearest neighbors, it’s very important to rebuild the address tables if you move devices around physically.

A lot of people will always pair new devices right next to the hub, which is fine. We call that “bench pairing.” But that means that device will think that its neighbors are the ones that it is physically closest to at the time of the pairing. So if you then move it six rooms away to its permanent location, you need to force a rebuild of all the devices’ address tables so that everyone knows who their real neighbors are. Otherwise messages can get lost because the device is trying to reach a “neighbor” who is actually out of range. Or a repeater may not know it’s right next to the intended recipient of a message.

The actual repair is simple than it sounds: each device just checks to see which devices are in range. That’s all it needs to know – – who its neighbors are.

During regular transmission, a Message will bounce around the network until it reaches a repeater who has the Message’s destination as one of its nearest neighbors.

So some sensors will be within one hop of the hub, and they will have the hub itself in their address table.

(There are some zwave networks that will predefine some routes for efficiency sake, but that’s just a technical issue, it doesn’t change the basic concept. A zwave network can only have 232 devices total and typically only 40 or 50 repeaters, so it’s not too bad.)

If the sensor is using a different protocol, like a Wemo WiFi device, then it’s a completely different method. WiFi devices, battery powered or not, don’t sleep. They’re in constant contact with their router and they use predefined message routes, usually in a star or tree topology. Simpler in some ways, but uses a lot more energy.

Wow, thank you! I assumed the battery powered devices just broadcasted a signal and were unable to receive any kind of data from the system.

When the devices are out of range of the hub they don’t work but it sounds like I’m not giving them enough time to learn or I need to actually pair them in place. I guess I also need to make sure it’s not having to make more than the 6 hops to the hub.

Zwave plus devices can usually be paired in place. Zigbee devices usually have to be paired next to the hub first, and then you do a network heal.

Maximum hops allowed from sensor to hub for Z wave is 4. For Zigbee, it’s 15. But zwave plus hops are longer for each individual hop. 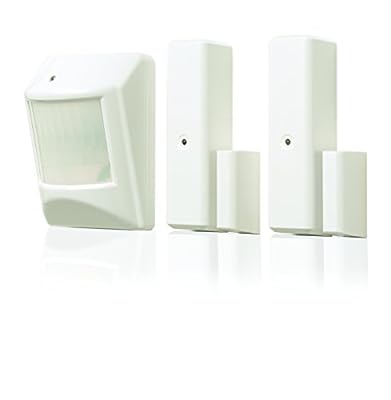 The GoControl Essential Z-Wave Home Security Suite pairs with a Z-Wave hub to create a customizable, expandable home security system. The suite includes 2 door/window sensors and a motion sensor. Once ...

They are all Zwave.

I can’t be sure of the exact signal route but the closest device is an Enerwave dual relay module in a junction box, after that the same, after that a GE wall switch and then two more Enerwave switches.

I believe it will talk to the GE switch and then directly to the hub (that’s the route that I believe is being taken) but isn’t talking to the enerwave modules. Those modules are slow to respond and have poor performance compared to the GE switches.

Of course that’s just me guessing. Now knowing that it can only make 4 hops, that might be the reason it won’t work within 10 feet of the Enerwave switch. That would theoretically be 5 hops on the way back to hub assuming all devices are communicating to their nearest devices.

They won’t necessarily be talking to the nearest device. Remember that their goal is to get a message to the hub in four hops, but they don’t know exactly where the hub is if it’s not in the first hop. So there is some randomness to it, and it can also be that there’s a path that’s unavailable temporarily, but theoretically they should be trying to go to the neighbor who is farthest away from them but still in the first hop.

You really can’t predict exactly what route it’s going to take each time, though, as it does depend in part on network traffic.

By any chance do you have any smartapps running that poll any of these devices?

Nope, no smartapps other than Smart Lighting. Still a newbie here. What do you recommend?

Nope, no smartapps other than Smart Lighting. Still a newbie here. What do you recommend?

If Smart Lighting does what you need, use it.

The following gives an overview of some of the other options: