Scroll to last paragraph for main question. I simply explain my scenario in the top paragraphs.

Hey guys! I am super new to the Smartthings ecosystem, although not the smart home idea. I have set up things such as Ring Doorbells, Nest thermostats ect. But what I need help with is another home tech idea.

I am in the works of building a digital skylight if you will. This consists of Phillips Hue lighting illuminating a big piece of frosted glass, all set up on a timer to follow the pattern of the sun, built into my ceiling. However I would also like to use this as a manual light for the evenings. How I thought I would go about this was use the Phillips Hue dimmer switch to set up a preset in the hue lighting, to use as a manual switch, along with the automatic, sun-mimicking profile.

This would’ve worked fine, but unfortunately the Hue Remote does not fit into a Decora wallplate, which I would really want.

All in all, I’m wondering if I could use an accessory switch with smart things to essentially use as a preset switch, instead of a switch which actually connects a circuit? Kinda similar to how a motion sensor you can set to do different things, except instead of creating motion, you flip a switch. If so, how would I go about doing this? Do I need the hue hub? The Smartthings hub? What is all necessary to connect a switch which activates a preset in the Hue lighting, while all fitting into a normal wall plate.
(maybe something like this would work? ASPIRE RF Accessory Switch - RF9517)

Thanks for all the help!
Matt

( I’ve moved this to projects so you can get individualized responses based on your specific set up.

The short answer is sure, lots of people do exactly that. Any switch that SmartThings recognizes which doesn’t actually control the current load to the smart bulbs can be used. It could be mains powered, battery powered, or a “smart switch cover” which is a battery powered device which fits over an existing switch.

You would need both the hue bridge and the SmartThings hub to make this work.

Thanks for the quick reply! I actually looked at that thread before I posted this, although I still decided to post this as I was and still am not sure which wireless accessory switches will work with Smartthings. That past thread only mentioned the aspire RF9517, and RF9542.

Are those the only switches that will work? I like the look of the 9517, although I am not too keen on spending $65 for a lightswitch. Is this the only option? Maybe there’s a list of all supported ST accessory switches?

Also, after some research it looks like I like the GE Z-Wave switch the most in terms of looks. I know this connects to ST, but can I use it as a button to turn on my hue lights?

it looks like I like the GE Z-Wave switch the most in terms of looks. I know this connects to ST, but can I use it as a button to turn on my hue lights?

Absolutely, You could easily have SmartThings turn on anything connected to the hub like your HUE bulb based on your GE switch being turned on or off.

I am assuming the switch you would replace is already controlling lighting somewhere in the room just not connected to the skylight. So you might consider using a dimmer to give you some more bang for the buck since you would have to spring for a smart switch.

But just curious why the HUE bulb? Is it just one you have above the fake skylight? You might consider using RGBW light-strips as an alternative as well controlled from a H801 smart-device which would give you full control to achieve your sequence for less money.

Also, after some research it looks like I like the GE Z-Wave switch the most in terms of looks. I know this connects to ST, but can I use it as a button to turn on my hue lights?

You can’t use the GE auxiliary switch, because it doesn’t have a radio in it and it’s actually invisible to SmartThings. It communicates with the matching GE master switch with physical traveler wires.

The most popular options of the mains powered switches are the Linear/gocontrol auxiliary switch or the Cooper that you mentioned previously. 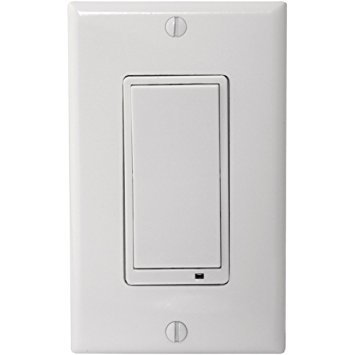 If you want to go with one of the battery powered options, see the following thread:

There are definitely people who have made contact sensor switches that go on top of the wall. There are some project reports on those.

I know you’re already aware of this, but just to be crystal clear for those who aren’t, battery-powered devices should never be put inside a wall, including inside a switch box, unless specifically designed for that purpose–they’re a fire hazard. (Batteries outgas.)

You know all those threads about corroding batteries on the forum right now? You don’t want that possibility anywhere near the electrical wiring for your house.

Again, I know you know that, I just wanted to spell it out for those who are new to home automation devices.

I’m not actually using a hue bulb, but instead a whole bunch of hue RGBW strips. I wanted to go with hue strips because at the time that was the only option i knew of that I could program to match the sun in terms of color temperature and brightness. Although, if there are any other options available for bright RGBW strips, I might be interested as I’m not 100% committed to hue yet.

Thanks! I really like that switch you listed! I’m mainly trying to go for a simple, and discrete setup.

I’m not actually using a hue bulb, but instead a whole bunch of hue RGBW strips. I wanted to go with hue strips because at the time that was the only option i knew of that I could program to match the sun in terms of color temperature and brightness.

Love it! Using the H801 WiFi Controller for those RGBW LED’s? You might consider the RGBWW strips if you haven’t purchased yet to give you the warmer colors. It makes a difference as I have both in my house.

Make sure to take pictures to post back here when you do this as I think it is a great idea.