Do not attempt to use Capture (it doesn’t work, hub may explode lol)

@blinduvula you need to update to this first, you’re probably getting an error as it is - when a date/time cannot be converted, it returns null instead of 0 and the subtraction fails.

@ady624 Error noticed, but you had it fixed before I had a chance to ask.

webCoRE updated and the error is gone, but it looks like there are some odd things happening. Process seems to be:
Step on mat
Light turns green
Light turns off
Wait 5 min
Light turns back on as green

Tracing it through, it looks like maybe the order isn’t quite right and I might need to throw in separate If statements for the light being on and off (or at least that’s how I’d go about it in CoRE).

Thanks again for the help! Just realized I’ve been talking to the mastermind behind this and I now feel a little silly.

DO NOT USE them yet

naturally its time to use them … how come it doesn’t work right?

from the UI for capture, there is an option to save to global or local store but didn’t see a named stored. do you plan to make capture/restore from a named store an option?

Try swapping the set color and turn on between them. That works for me, but the turn on may bring it on to the wrong color for a second there. Click on the turn on and in that dialog you can move it up and down by clicking on the gray bars showing all the other tasks in the action.

A named store means more variables lol. Will “think” about it. And deny it.

What would be a real world benefit?

@blinduvula what Ady said, but you also have to enable the grab bars first to move things around, using the <> in the top left.

You can reorder tasks from inside the task editor dialog. The dialog lists all the tasks before and after the current one, just click on the one you want to move away and make room

That seemed to take care of it!

Here’s what I was thinking of. First piston manages some lights that have different behavior in 3 different modes. Modes are:

Mode switches from Evening to Party to Movie to Party to Evening. Let’s look at the captures:

Hence the ask for named stores. Happy to answer other questions.

(gang of minions, he doesn’t probably know what that means, right?)

I’m having issues getting the Flash command to work with my Hue Lights since last week. I tested this out on a extremely simple piston but the flash works fine on my other bulbs but not on my Hue Color bulbs like it used to. I’m using tmleafs version of Hub B Smart so not sure if this is a webCoRE issue or issue with this custom Smartapp/Device Handler: [UPDATED 4/19/17] Hue B Smart (Smart and FAST Hue Lighting)

The door closes too fast and cancels the flash. Click on the with and click the options cog and set TCP to Never cancel.

I have a similar Piston that just stops working every once in a while. Pause/Resume works again

The parent app will eventually get a smart recovery module - ST misses time events once in a while.

I’m getting the same results changing TCP to Never Cancel. If I change this to my GE Bulbs or any of my switches, it works fine.

What happens if you do not close the door? The first example had you closing the door within one second, this example does not show the door closing

Well ady624, I thought I had my virtual switch issue resolved with your suggestion to use switch is on instead of switch changes to on. But this morning at sunrise, things didn’t go as planned. 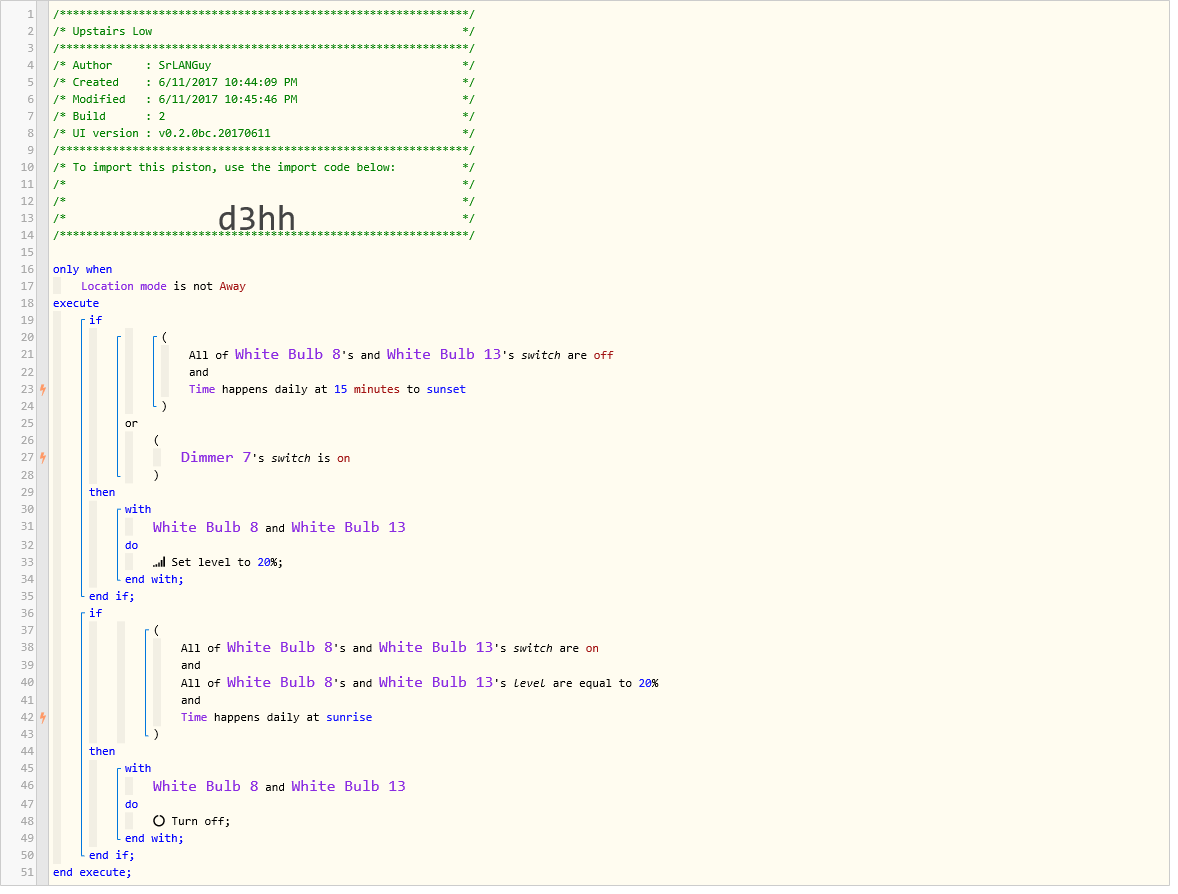 On line #27, Dimmer 7 is my virtual switch. I also had to turn on the Always subscribe option for that line.

On line #42, sunrise is a trigger that should result in the two lights turning off. But since the virtual switch was in the ON position, it resulted in both lights turning on at sunrise (which was not my intention).

Do you have any other suggestions on how I can fix this piston?

Logs? Do you have any logs?

@ady624 o well. you did ask for real world benefit, so tried.

thanks for considering it. And denying it.

I modified the piston so instead of trying to turn the lights off at sunrise, it should try turn them off at “368 minutes before sunrise” (or 11:29pm). I turned on FULL logs, turned both lights off, left the virtual switch on, and then waited for 11:29pm. The piston ran and my lights turned on instead of staying off. Here are the logs: