Did you enable OAuth? Do you have another instance of the Blink Camera Manager installed accidentally?

Genius, I should let Blink about this. Infact if Blink patches their firmware to allow for notifications before recordings you can even hook up the light to turn on when blink detects motions.

I do not, just this one instance.

Verify that OAuth is enabled, what you’re saying sounds like OAuth is the culprit (can identify the camera but creating breaks because OAuth fails). There have been recent reports of people having issues with the OAuth API (ST throws an exception while using OAuth). Best way to confirm is to open the IDE Live Logging and see the actual error reported by ST. If is OAuth related all I can suggest is wait for a bit and the platform should fix itself if not you may need to report it to ST staff (Tim or Aaron or Vlad) (I’m refraining from saying support because these days they just wash their hands of anything custom)

This is what I see in the logs.
OAuth is enabled.

You haven’t installed the device handler. See the instructions in the first post, there are two pieces of software to install and they have different instructions.

Sorry about that. I thought I followed the instructions, but missed it. Thank you, it’s working now.

That would be great, There’s a slight delay now but it’s not an issue. Though it would be better to turn on immediately!

If it works in Minnesota it should work here! So far its only been down to 40, it will get in the teens over Jan/Feb at night. The light does not affect the camera at all, in fact it improves the picture since the Blink “light” (comes on before it captures) is very low intensity. The light fixture keeps out moisture, there is no over-hand protecting it. The light comes on via Rboy’s driver and ST, slight delay (maybe 2-3 seconds) after it notices motion. Obviously the sky’s the limit at that point,I have a bunch of internal and external ligths come on, its a few second delay further from the outside light, it really looks like someone turned on the lights.

Can you send the Lowes URL of the fixture you used? Also, how high is this camera from the ground?

Your solution is similar to a Kuna: 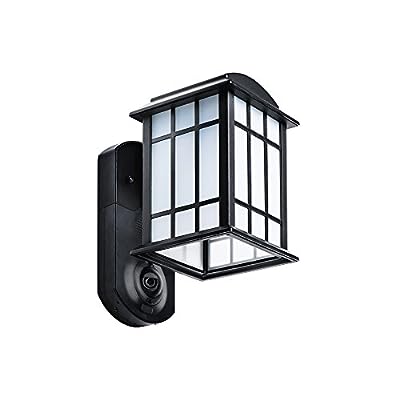 Here it is. And yep it’s got a motion sensor but I removed it. The irony isn’t lost on me, but it had the perfect shape and dimensions. It’s 10 ft off the ground

That an issue with your phone/ST app. The ST app depends on your phone for the video capabilities, try using an iPhone and see the difference.

Thanks for the feedback. I encountered the issue initially on my Nexus 6. Got a new Galaxy s7 edge and the issue still persists. I tried on my wife’s iPhone and did not see the issue, so it must be the Android app :(.

I am using a One+ phone first gen and I have not seen any grainy video feed on it. It is an Android. The only issue comes from the ST implementation of their video feed which give a slight feed latency when loading camera feed via @RBoy DH. And in my case nothing with signal strength and interference.

I have a question about motion and I want to apologize in advance because I’m sure this will be the umpteenth time this has been asked and answered already. The thread search only wants to display results from the first 200 posts of this thread.

Can the blink cameras be used as a replacement for regular motion sensors where they report motion for as long as motion exists, and stop reporting motion when the motion stops? From what I’m seeing, they only report a motion occurrence, but don’t actually keep the motion state as active the entire time that there is motion. Is this correct?

Good question. Yes this was answered by @RBoy.

The camera is primarily a video reporter. You can change the recording length via the @RBoy ST integration and it will become for all tends and purpose, a motion sensor. However, it is primary a video device and will record a clip when motion is detected and only after it will send you a notification. That is the only drawback which I and a lot of Power users here have complained about Blink. All else being equal, I like it more than the Arlo cameras which I also have and are now in my storage…

Adding on to the note above. The motion timeout by default is one minute. So if there isn’t a new motion detected event from the camera within one minute it will turn the motion off. However if another motion event is reported by the camera it will stay on. Hence to answe me yes it should stay on for as long as there is motion.
This also depends upon the motion interval and motion video length configured on your camera as pointed out above.

Yes the camera has to be armed to detect motion and take a picture. I love it so far, I don’t have a need for archived video recording so this is perfect - just get a clip of what moved. Getting another for my front door.