Did anybody else receive the following notification via email this morning?

On December 19, 2017, Blink is discontinuing support for all SmartThings integrations including the developer RBoy app. For your security, we recommend that you change your Blink password. We thank for your continued support of Blink and apologize for any inconvenience.

Happy Christmas from Blink. Very annoying. No notice or anything. Blink doesn’t even do Geo-fencing so have bricked themselves. I’ve emailed their support to voice my disappointment. Please do the same. Is there anything else comparable actually available in the market? Arlo has a high time lag and short battery life in comparison. Grr…!

I’ve called support, which is apparently overwhelmed and was given no notice either. I just upgraded my Amazon review from 5 stars to 1, and I made my displeasure known on the blink forums.

The cameras are literally bricked afaic. They’re useless to me.

I’ve called support, which is apparently overwhelmed and was given no notice either. I just upgraded my Amazon review from 5 stars to 1, and I made my displeasure known on the blink forums.

The cameras are literally bricked afaic. They’re useless to me.

I’ve been able to get most of the functionality I was using back through a combination of webcore, IFTTT, simulated switches, and simulated motion sensors. However, because their IFTTT integration sucks (and I despise IFTTT in general), I still lose a lot of capability I was planning on leveraging in the near future, such as automated sensitivity adjustments and arming individual groups of cameras. At least it buys me a little time to research replacements which will meet my needs.

I personally think Blink is in trouble and is about to be acquired by someone. As a company, they have a nice product but beyond that, have encountered repeated, massive product delays, have not fulfilled feature promises, and are clearly understaffed and underresourced by their own admission. I have been willing to overlook these flaws given the excellent ST integration, but I can’t any longer. Many of my cameras are going back and no more will be purchased.

Seems they still advertise an ST integration at https://blinkforhome.com/pages/blink-integrations

Seems they still advertise an ST integration at https://blinkforhome.com/pages/blink-integrations

It would appear that this is the real reason that Smarthings integration was pulled: Welcome to the party I guess? There’s been about 300 posts that have happened since that news break…

Or all the additional threads posting about it. Hard to miss 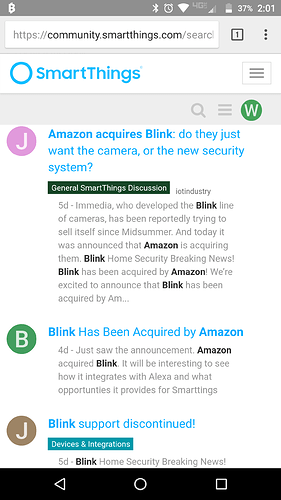 Wait! Did Amazon buy Blink? When did this happen?? HA HA just playing with you

When did this happen??

I wonder what the real REAL reason is.

Like I mentioned previously, I picked up a pair of Blink XT’s for Christmas and I thought I’d give them a try to see whether I could survive on the IFTTT integration with SmartThings but sadly I haven’t even got to that point yet.

This is the quality that the night vision provides: 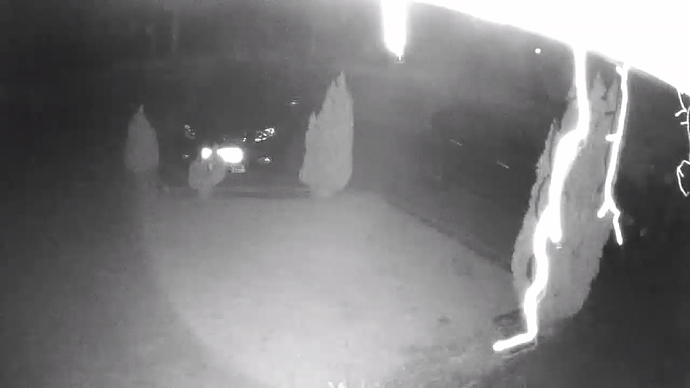 Obviously it’s terrible - I don’t know if I was expecting too much.

Is that a Christmas light directly in front of your cam and turned on?

Yeah they’re Christmas lights, but no - they’re not turned on.

My night vision is much better than that. The bright foreground wooden beam or fascia or whatever it is at upper right is likely part of the problem. Eliminating bright, light-colored objects that reflect the light back into the lens should help.