I haven’t used this app before, so I can’t be sure I’m doing it right but:
I have a name under the “Voice Macro Name”. I assume that’s the primary macro name.
I’ve tried them with both no aliases listed, and duplicating the Voice Macro name. I’m not sure if aliases are required or not.

Can you send a screen shot of your main screen where you are configuring the macros…I can’t really reproduce what you are seeing. I can’t control your house with that information, so no worries there 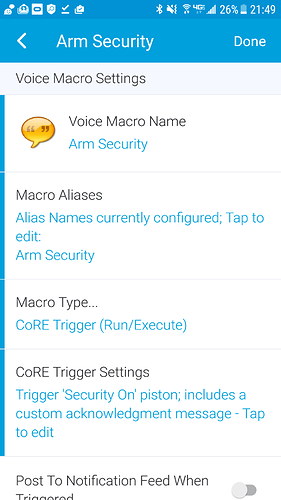 Ok…I was able to reproduce this…you aren’t doing anything wrong…I created myself a little logic loop here…stand by.

Ok…ironically, I put TOO much logic in this…simply delete 1297…it is not needed

Nice work! It’s all working as expected now. Thank you so much.

Would you like me to delete all my comments to clean up your thread a bit?

Nah…quite honestly this is good for others to view and learn from…I will be closing this thread when the next version is released (it will have these fixes in them).

“Alexa, tell SmartThings to remind me to do taxes”
“Alexa, ask SmartThings for my reminders” … “You have 3 reminders. 1. Do taxes 2. …”

Ironically, I am expanding the message queue in the next release which will build the framework for things like this…next release on Friday won’t have this but will give an indication of where I am going with this.

I’m totally comfortable with the copy/paste of the slots. Given you were asking me to go to the app to execute the “setup variables” link, I was wondering if that link actually performed any function beyond providing the variables. Clear that there is not.

Thanks for your hard work on this.

I wish…I am speaking to some folks about some ‘automation’ to perform the slot population, but nothing from Amazon, unfortunately.

Announcing version 2.2.3 of Ask Alexa I am pleased to announce the 2.2.3 version of Ask Alexa. In this version I continue (along with help from the community) to evolve the application to allow more conversational syntax, along with adding more functionality for existing and new devices. This version is simply a code update (to the IDE), so those with GitHub integration can easily update. However, as always it is good practice to update your developer slots…I did make some changes to this area so I am interested to see if I missed something. The next update will probably be a couple weeks (or more) away as I work with a few other developers and begin the next ‘big thing’ with Ask Alexa. However, I will push bug fixes out if you report them to me! And I will always be on the forum to haras…