maybe I am not able to see, where does the first post explain how to use the added presentation within the DTH code ?
I want to start a function when the button is clicked and I want to set the value of “currentState.value” within the code at some point.

Not sure what you. mean by ‘use the presentation’. So you have your presentation showing. In you capability and presentation, did you link the button (switch) to a function? Did you create that function in your DTH? To set any device value, you have to use ‘sendEvent’.

“to set any device value, you have to use ‘sendEvent’”
Ok. I already do that in my DTH for old ST app with its states.
But how do I address the new custom capability values with sendEvent ?

ok. so I have to change my json file and regenerate ?
but then how shall I update “currentState.value” of my custom capability in the code ?
how shall I address it ?
and how shall I bind this button to a command in my DTH ?

Ah OK, I think you may have skipped quite a few hours of learning here.

When you define your custom capability you define it with attributes and/or commands which then work exactly the same way as those for stock capabilities do.

When you are working with a stock capability like ‘Switch’ you define it in your code using capability "Switch". It has the attribute switch which takes the values on and off and also defines the commands on and off. When you click on an on/off button in the app, or use an automation, you are using the commands, which are implemented as the methods on() and off(). The actual value of the attribute is typically set in response to messages received in the parse() method using e.g. sendEvent(name: "switch", value: "on") (sometimes createEvent), or for devices that don’t communicate their current state you send the events in the on() and off() methods.

So suppose you have defined a custom capability ‘My Capability’. You will define that in your DTH using the namespace that gets allocated to you when you create the capability in the CLI, and the ID of the capability. So something like capability "ankletreehorse12345.myCapability". Supposing that has the attribute ‘currentState’ that takes the values ‘active’ and ‘inactive’ and the commands ‘setActive’ and ‘setInactive’. You will define the command methods setActive() and setInactive() and set the attribute using sendEvent(name: "currentState", value: "active") and sendEvent(name: "currentState", value: "inactive"). So basically the same approach as stock capabilities.

Now let’s look at the interesting bit of your capability presentation. I’ve given it a tweak to match the description above. It is telling the app to display your capability as a ‘toggleSwitch’ which is a type of on/off switch. As luck would have it, you’ve picked the same display type that I’ve been waiting on for the last how ever many months it is and it doesn’t actually work properly yet. However if it did …

Your original capability presentation has the extra entry “name” in the “command” section. That is used when your capability is defined with a ‘setter command’ instead of individual ones and the other entries define the arguments. So if you added "name": "setCurrentState" to the above your DTH would be called as setCurrentState("setActive") or setCurrentState("setInactive").

I think that is as much as I want to say on the subject at the moment.

thanks . it is clear for me now. I will try to implement this.

However, I need a multi value display with following possible states:
on, off, playing, standby, stopped

So I changed my json as:

but when it returns it does not return states other than off and on.
what can I use to display multi-value state ?

And if the toggleSwitch commands do not work, is there a working button to bind with my custom commands ?

is there a working profile that we can use as custom buttons in our custom capability ? 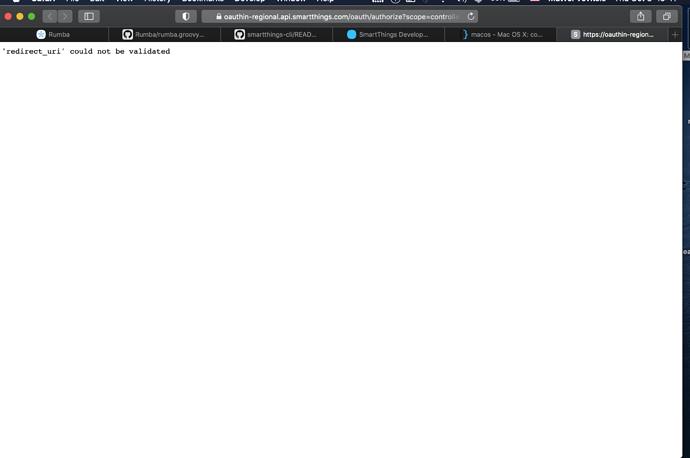 You need a PAT token and the token goes into the config.yaml

@jody.albritton
I generated a token with all permissions, and copied your config.yaml except replaced the xxxx with my token.

This is what I get: 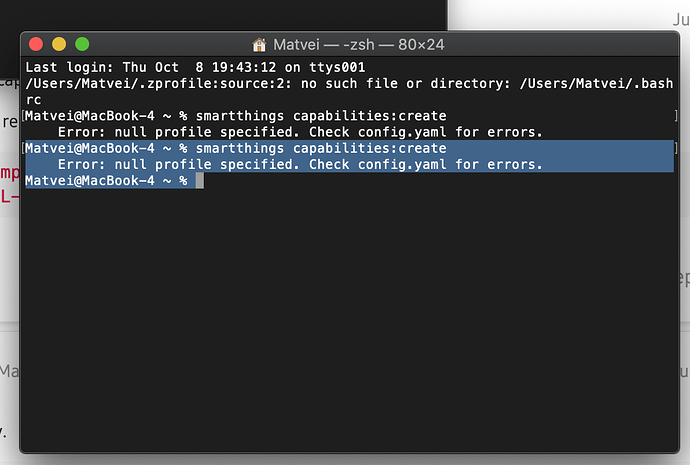 Thanks, was getting the same problem and removing those two lines fixed my issue.

@jody.albritton I’ll save my frustration details and will try to be a bit more pragmatic with some recommendations:

It really does feel wrong to me that there seems to still have soo many issues but yet, the expectation is that we work around the clock to get all of the migration. We’ve invested a lot of time and effort to build the plateform, to grow the ecosystem and expecting everyone to go over all of the migration in such a short period of time does not really seems reasonable to me.

I cannot upload my device config. Here is the error I get.

And here is my json

You. need to remove presentationID and ManufacturerName. For some reason the generate adds these but create won’t accept them Another issue with the latest CLI.

Posted about this a while ago but, no comments and no fixes:

I was on vacation and came back and installed the latest CLI. Now I notice a new error. When I rung the presentation:device-config:generate, the resulting file has these two lines: "presentationId": "blah", "manufacturerName": "SmartThingsCommunity", I cannot successfully run the device-config:create until I delete these lines. Not sure why they are there or why the next step won’t accept them but it is annoying.

This is something we have fixed and are pushing out to production very soon. The generated response shouldn’t have that presentation ID, that’s just confusing. Thanks for the salient feedback

ToggleSwitch by definition is going to be a 2 value button. It has some predefined commands like “on” and “off”

If you look in detailView -> list this display type supports multiple values that you would choose from a drop down, this seems like it might be a better fit for your use case?

For the sake of transparency these issues are being checked daily and we are hard at work to address these failing commands with the appropriate teams. We recognize the impact of display type commands not working and we in engineering are on this.

Thanks Morgan. There are many DTH’s released (given the upcoming deadline) with some controls coded in there that comply with the documentation. We’ve taken a “leap of faith” in releasing them, they’re not responding/working exactly they way the documentations says they should, but the hope is that the these controls will start working as documented when the reported bugs are fixed and pushed into production.

I can also say that a fix is being looked at in lower environments and is supposed to go to production next week for fixing toggleSwitch and textField not sending commands.

This should be a mobile only update, so existing presentations should start working for these 2 display types.

Can you describe the documentation discrepancies to me RBoy so I can review the difference between expected and actual? I assume by your description that these aren’t flat out “bugs” (something just not working) and that there is a difference in how they operate from what you expect?

Hard to say what’s a bug and what a “difference”. I’ve raised a lot of tickets in the past few weeks with detailed samples/codes to replicate of the bugs and differences I’ve come across. @nayelyz recently consolidated/grouped them.

I’ve been told for “now” the list of alternatives in the command and state should be identical as a workaround. That’s not a practical situation and as per the documentation it can have differences (which is more realistic as I explained earlier), so technically while “list” is working, it’s not displaying what it should and so I don’t know if you’ll call this a bug or a difference. The hope is when the ticket is fixed it’ll display the alternative from the state so that the DTH (which is already released) will show the correct value.