Thanks for that. I’ll probably test with a foam insulating sticker (like with weather strips, etc) between the door and a frig magnet before going this route.

I have both the new Iris and old PEQ versions. After getting the new Iris version, I’d take these over any of them: 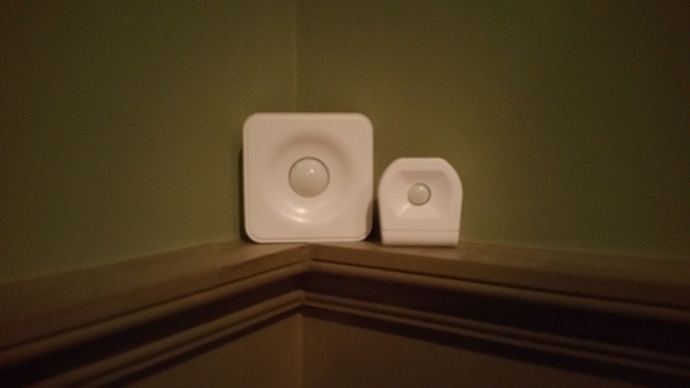 How’s this for a comparison? PEQ/SmartThings (old version), next is the new SmartThings version, and then the new Iris: 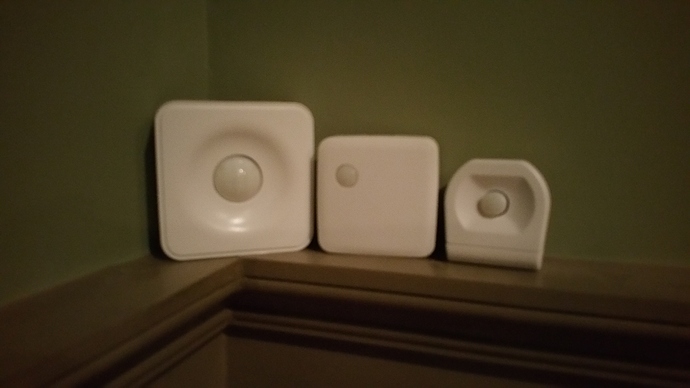 Thanks @johnconstantelo for the pic comparison as I have the new ST version of the motion sensor. I’m looking forward to getting one as soon as my local Lowes will have it available.

Well crap, I should have read that closer, sorry! I have those too

The Iris contact sensors are smaller, and I think look a lot nicer. They are a bit finicky with magnet placement, which can be frustrating in difficult mounting situations. There’s not a lot of wiggle room with alignment of the “marks” on the magnet and sensor compared to the other sensors I own (Ecolinks are the most versatile for me). They (magnet and sensor) can be placed quite far from each other, but if alignment isn’t just right, it won’t work.

And all 3 made by Centralite.

I really like the look of the new SmartThings motion sensor. It makes the other two look very 20th century.

If the device won’t be very visible, that won’t make much difference, but if it’s going to be one that can be prominently seen in the room, I would probably pay the price differential. 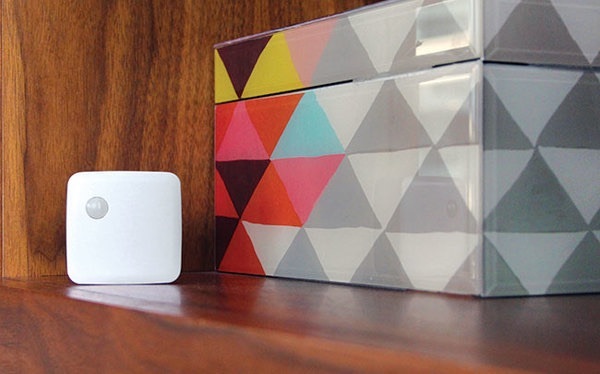 Hi @JDRoberts, I do like the look of the new SmartThings sensors. It fits perfectly on top of a door jam with just a small amount of double sided tape to keep it from falling.

Where the Iris benefits and surpasses the others, for me at least, is how the back is notched to fit nicely tucked in a corner. If done right, you don’t even notice them.

Both of these devices are so lite that you hardly need any double sided tape to keep them in place. That also comes in super handy when it comes time to remove them without damaging your walls.

How is the battery life on the new Iris sensors?

It’s still too early to tell on battery life. I invested in rechargables. 8 high capcity batteries and a charger for under $20 on Amazon.

I think I’m going to get rid of the Quirky sensors and either go all GoControl.

If the Iris sensors are as good as everyone hopes, then I’ll go with them… they aren’t much
more expensive than the GoControl.

Rechargeables aren’t appropriate for this type of use. Rechargeable batteries do best in situations where are are charged and discharged regularly.

In case you missed it, Keen Home is offering 5% off their smart vents for Smartthings users. Just enter KEENHOMEST in the coupon section at checkout. I plan to pair mine with N Ecobee3. Maybe my house won’t be freezing this winter!

(yes, that is my referral link. Four free vents would outfit my whole house!)

I have old wired magnetic reed switches on my metal garage doors (doors are modern, about 14 years old, not sure if steel or aluminum). For my ESP8266 / HomeGenie system I have the switches set so if door is all the way down it is closed; otherwise I consider it open as something could get in. Kind of like a regular door, if it isn’t all the way closed it might as well be open.

I still haven’t gotten ST hubv2 yet; was kinda waiting on a good kit deal, but the home monitoring kit so far isn’t much of a deal in my mind.

@bamarayne I’ll gladly take those Quirky Trippers from you

I found this in my local HD. Great switch that works great for on/off functions and it extends your Zigbee network. Compare to the GE Zigbee switches and they are $25 cheaper. 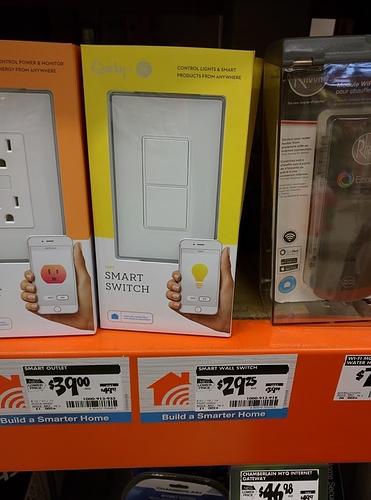 Actually, I’m thinking about selling those and getting the iris sensors. I’ve also got 3 Wemo in wall switches. 2 are still in the boxes.

Throw a price at me and let’s see if we can make a deal.

I found this in my local HD. Great switch that works great for on/off functions and it extends your Zigbee network. Compare to the GE Zigbee switches and they are $25 cheaper.

The GE Zigbee switches that are officially supported by smart things give you full functionality.

My understanding is that like many scene controllers and multi and point devices, the tapt has only partial functionality with SmartThings. It can control the single physical load, and you can send it an on or off for that load, but you don’t get status back, and you can’t do much else with it.

Or do you have more functionality working with SmartThings? If so, what device type are you using for it?

I don’t have it myself, I’m just going by what people have been posting in the following thread:

Device Type for Quirky / GE Tapt Switch Using a dual load Zigbee Device Type written by @JohnR I have created a starting point for the Tapt Switch. I’ve read this device can control a load and also a scene/mode. Not sure how the second part works but I’ve gotten the switch to be controllable. Installation Instructions 1- Login to the IDE and create a custom device type using the device type for from my github https://github.com/mattjfrank/Quirky-GE-Tapt-Switch-Smart-Things-Device-Type/blob/master/Quirky-GE-Tapt-Switch.groovy once created, save and publish. 2- Add Tapt to SmartThings by pressing and holding both buttons for 5 seconds while ST is looking for new devices. 3- The device should show up as “Quirky GE Tapt Switch” If it doesn’t manually change it to that device type. …

It’s less of a bargain if it’s not full featured, but I can see where it could still Be good for some use cases.