I’ve been looking all over for the ge dimmers. Twice now the store has had them online in stock and when I go to the store they can’t find them. Only the newer models are there on the shelf. Anyone else running into that ?

I did, we looked for the part number in the cardboard boxes above the shelves (sharpie written on side) in the isles close to it and found them. For me, it did me no good, the manager wouldn’t sell them discounted. He knew they were non stock, but he said the were being bought back by the vendor, and they would not sell them to me.

I did, we looked for the part number in the cardboard boxes above the shelves (sharpie written on side) in the isles close to it and found them. For me, it did me no good, the manager wouldn’t sell them discounted. He knew they were non stock, but he said the were being bought back by the vendor, and they would not sell them to me.

They knew they were non stock but just couldn’t find them. Oh well. Guess I’ll wait for a sale. Most of my switches are double switches anyway

All the mark down stuff is really old stock. One guy told me they hadn’t ordered them in almost 2 yrs.
I ordered 4 switches online. received a conformation by email and phone. Got to the store ans was told they didn’t have them. Went to the display and found them behind another product. 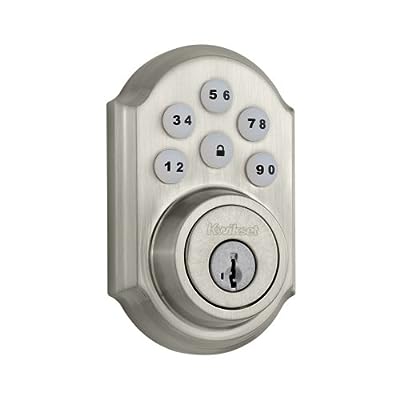 Step up to designer styles and superior security with Kwikset Signature Series products. SmartCode touchpad electronic deadbolt is the only one-touch locking motorized deadbolt.  With your personalize ...

I have 3 Yale locks, and they eat through batteries pretty quick

Batteries in my Schalges last about a year in the door used all the time , Finally changed them in the door not used as often last month after over 2 years.

I have 3 Yale locks, and they eat through batteries pretty quick

If website has them marked down to clearance just buy online and they will likely find them. That what I did. After going to store and them not being able to find and claiming inventory must be wrong, I went home and ordered online and they found them that same day.

Easier said then done! When you click the link the price defaulted back to the $34 number. I had to find a store in my area that still had stock and the $17 price. Glad you found them!

At current prices if the switch is only operating 1 or 2 bulbs I run Smart bulbs. If it’s a switch that someone has a high likelihood of being used I use a Z switch.
If it’s more then 2 or 3 bulbs then a Z switch makes better sense for me.

This used to be my philosophy but then this:

Not very fun when you are asleep and all of the sudden at 3AM, all the lights in the room come on.

Not very fun when you are asleep and all of the sudden at 3AM, all the lights in the room come on.

This has not happened to me, but I know I’ve been pretty lucky.
I just unintegrated 18 GE Link bulbs from my system.

I started this little adventure with bulbs… they were the easiest just in case this didn’t work out, and the price point at $15.00 each worked out for my budget…

But then along came this thread in the forum… and then @TexAMR found this little deal on the GE switches… and suddenly everything in my world changed. I’ve been averaging about $8.50 per On/Off switch and the same for the 3-way switches. I even got 3 of the outdoor modules for $10.00 each.

So, for the last month I’ve been on a mission to get as many switches as I possibly could. I’m pretty close to having all that I need… which is good because I’ve cleaned out every store in the area except one… and I’m thinking of going up there tomorrow… they have 9 left and I’m feeling kind of lucky.

When I’m done I’ll have every switch in the house changed over to a smart switch… and at this price it’s working out great.

I just recently got the $35.00 deal on the Fire TV Stick. I wanted to see how I like it. And so far, it’s great. I set it up on the TV and then I disconnected it from the TV. As long as it was plugged into power then I still had control over the HA aspect of the house. I’m going to put it in the guest room and each of the kids room… probably in the master bedroom too. I have an Echo device in there already, but I’m sure I can find another home for it. I still have one in the box I’m thinking of putting in the garage.

So far, it’s all going really well and I’ve spent less than $1500.00 on everything… thanks to this one thread!

@TEWphotography Thanks. I missed it recently when it was this price. Got a couple this time.

What is the difference between the old and new GE switches? And the GE dimmers?

I found a couple stores near my area showing online they have them…preparing for a trek.

I’ve noticed some of the old dimmer works only with incandescent bulbs. With On/Off switches it doesn’t matter

Buying 2 hubs as Xmas gifts. I can get 10% off but hoping for more. Anyone have a Homedepot 20% off or other deal on ST hubs?