Wow I never realized that. That’s a pretty powerful nugget of info.

As I understand it, it’s an actual feature of on/off switches.

I’m just hoping something could be designed with CoRE to mimic that functionality.

The only way to find out is to test it.
I don’t have/use dimmer switches (hue bulbs everywhere except for the toggle switch on the fluorescent tubes), so I can’t test it out.

But… you would want to set @tap_up to true if it raises a certain percentage of brightness. Then you’d set the rule to check if @tap_up is true when it raises again (if so, it would then jump to 100%). It really is just like the example I linked, with the exception being that you’d have the piston reset the boolean to false after 5 seconds or if it jumps to 100%. This way, if you press it and it goes true, you do it 6 or 7 seconds later, it’s already reverted to false and will then become set true again. If you do it in under 5 seconds, it will jump to 100% brightness and set the boolean false.

Is there a way to cancel fading for lighting?

I tried IFTTT at first, but the condition provided by the Weather Underground are: rain, snow, cloudy, and clear. I can’t seem to control the frequency of updates. Am I overlooking advanced settings somewhere on IFTTT?

Tried the link you’ve provided and couldn’t find the code for it, but I did install the Smart Weather tile this post mentioned…or is it the same one [RELEASE] Smart Weather Station Tile Updater - Fix Broken Modes

The handler was installed and device added, then I tried to get it to poll via the instructions from the post above…nada. Tried creating a “Do” piston and still nothing. It doesn’t seem to want to poll or refresh the tile. I tried different iterations of getting the piston to just send me an SMS message every 1 minute via a “Do” or “If” (from the post above), and aside from the first firing, it never repeats itself.

What am I doing wrong???

I have enabled expert mode, but it seems currently there’s a large problem that I‘m having where I can’t even get the piston to refresh/poll the SmartWeather tile. Other pistons are behaving normally, though they’re not on a time loop of any kind aside from the sunrise/sunset one where I have it turn on a light on/off.

I’ve setup a piston for different scenarios in my bedroom and its associated lighting, I can’t tell why but it is not evaluating device changes. Bedroom Lamp is on in this example but the piston state evaluation states otherwise. Any suggestions?

There is a smart app, I don’t know of a way within CoRE. 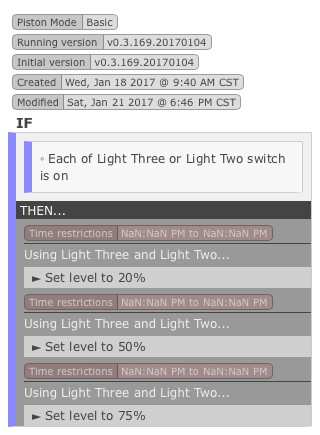 Would anyone know why the lights done adjust levels through the day?

No I don’t think so. That trigger is based on when Weather Underground updates. There is no polling as far as I know.

But it seems you have the Smart Weather tile going so that’s should let you get to the attributes you want.

What are you trying to do with this piston? I see a few things I might fix but I’m not 100% sure what are your desired behaviors for the lights.

1, motion in hallway between times turn on lamp
2, if bedroom lights on don’t automatically turn off lamp
3, turn off lamp if been 5 minutes.

1, motion in hallway between times turn on lamp2, if bedroom lights on don’t automatically turn off lamp3, turn off lamp if been 5 minutes.

This is what I use - adjust as required: 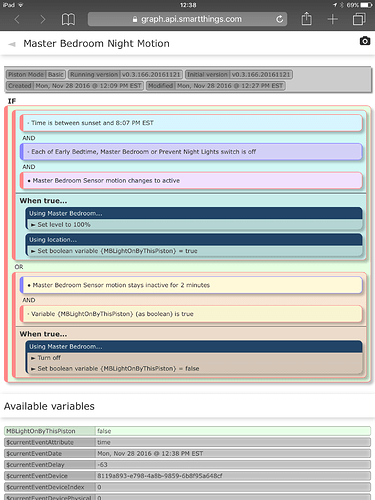 Yeah, no control over WU’s update frequency is a killer.

Smart tile for weather is there but it needs to be manually refreshed…kind of pointless for automation.

Have you tried adding a piston to refresh it?

Could someone explain what " cancel on piston state change " is used for .

I just made my first Piston… at 10:30pm my Lightify Flex Strip changes to the color Red at 30% brightness. It was pretty cool to watch it happen on its own!

Now, I’d like to crank the complexity up a couple of levels, but I’m not sure how to go about it. If someone could help walk me through achieving this…

When the Mode changes to Morning I would like the Strip to:

When the Mode changes to Night I would like the Strip to:

When the Mode changes to Away:

When we come home and the Mode changes From Away to Morning, Day, or Evening:

When we come home and the Mode changes from Away to Night:

I’m sure this seems easy to a lot of you, but to me it’s pretty complex! Thanks for any help or pointers you can give me.

What do I use for the Track URI for an audio player? I am using VLC Thing and want to play a doorbell sound when someone knocks on my front door.

Ok @Kevin_Neberman . One of the problems you have for one is that the OR conditions will all be evaluated at the same time, they don’t get evaluated in order. So you will have a hard time getting one to turn on a light and another condition to check to see if it’s on. So I understand what you want (during these times if there is motion, turn on the lamp then shut it off in 5 mins unless the bedroom lights then just leave the lamp on) I think this should work.