CES 2017 is supposedly all about smart homes and smart cars, but SmartThings is hardly even mentioned. Silence. The only reference I could find is this:

What’s odd is that when talking about Samsung smart appliances, SmartThings is completely ignored. It looks to me that Samsung appliances division pushes it’s own IoT platform and mobile app, independent from SmartThings, and has no desire to integrate. Not a good sign for SmartThings.

Same goes for the " Family Hub" fridge with huge LCD screen. You’d think it’s the most natural place to control your smart home, but no, no mention of SmartThings either.

To give some perspective here, Lowe’s which had a large presence last year with a large mocked-up house showing Iris SmartHome technology in every room, is not even attending this year. The parallel here is that both companies showed a lot, made many promises, and delivered nothing. Seems like there is plenty of egg to go around this year.

But how is this different than Google which has Android, Chrome OS, Google Assistant, Ok, Google. They have historically not had their main OS power all devices. In fact Chrome OS as competing in some ways to Android.

Vera has a great dev community that made the actual platform extend but the underlining UI was horrible and buggy. Without the devs that product would have been dead years ago. You don’t really hear about them unless you have a Vera and in the forums.

I agree that it would feel better to hear powered by Smartthings but I can only be happy that this little Hub via the community can do so much.

What else can be done that the community isn’t already doing? The app is good and easy to use (compare this to Vera!), the community is killing it and I do get excited when I see Release in the title.

Truth is, Samsung likely isn’t making money off ST and they like to try to do things themselves versus platforms that work (Android/Tizen).

Finally! It’s official, there will be a hub to bridge integration for smartthings/Lutron, probably similar to the SmartThings/Hue integration.

You won’t, however, be able to use the SmartThings Hub to replace your Lutron Bridge the way you can with the Wink Hub. SmartThings doesn’t include native support for the proprietary Clear Connect signal that Lutron devices use to transmit data, so you’ll still need that Lutron Bridge plugged into your router to act as translator.

This is excellent news, not just because Lutron makes great switches, but because they make one of the only switches that doesn’t require a neutral wire but still works with LEDs, so it can be used to easily retrofit older houses.

Lutron gear will soon work with SmartThings and the Nest Cam

The veteran smart lighting maker plans to sync up with Samsung's connected home platform in 2017. You'll also be able to set your lights to come on whenever the Nest Cam detects motion.

Not many Z wave announcements coming out of CES, but GE/Jasco had one:

So what isn’t clear is if this will require a new hub or not for lutron support. Given the vagueness, my guess is not given the lack of native support like wink has.

Launching early this year really means, well when its ready. So if it even shows up by end of year, I’ll be impressed.

St, so far behind and falling even further behind. The biggest show of the year and they have nothing, in fact less than nothing to show.

I am so at the point where unless I can buy it now, and it actually works as described I don’t believe any hype coming from ST.

One interesting category at CES: HomeKit retrofits based on adding a new bridge. Or swapping out an existing radio module.

Yale announced a HomeKit module which can replace the existing Z wave or zigbee module in their real living locks. Expected to sell for $75, it’s a very easy retrofit, that means you don’t have to get a new lock and you don’t even have to remove the lock from the door. It does mean giving up Zwave compatibility to get homekit, so will be interesting to see how it sells.

And Chamberlain announced A MyQ add on which will give full HomeKit capability to existing myQ installations. That one’s not due until summer 2017, so you never know when it will actually arrive, but it’s an interesting approach. It’s also possible with that one that you would retain other existing means of control.

Honeywell announced a Lyric security system with HomeKit (that the contract based system with professional installation) but I can’t tell yet whether that’s a retrofit module or whole new set of equipment. The 2016 version of the same system has a slot where an additional radio could be added, I just don’t know if that’s how the Homekit integration is being done or not. 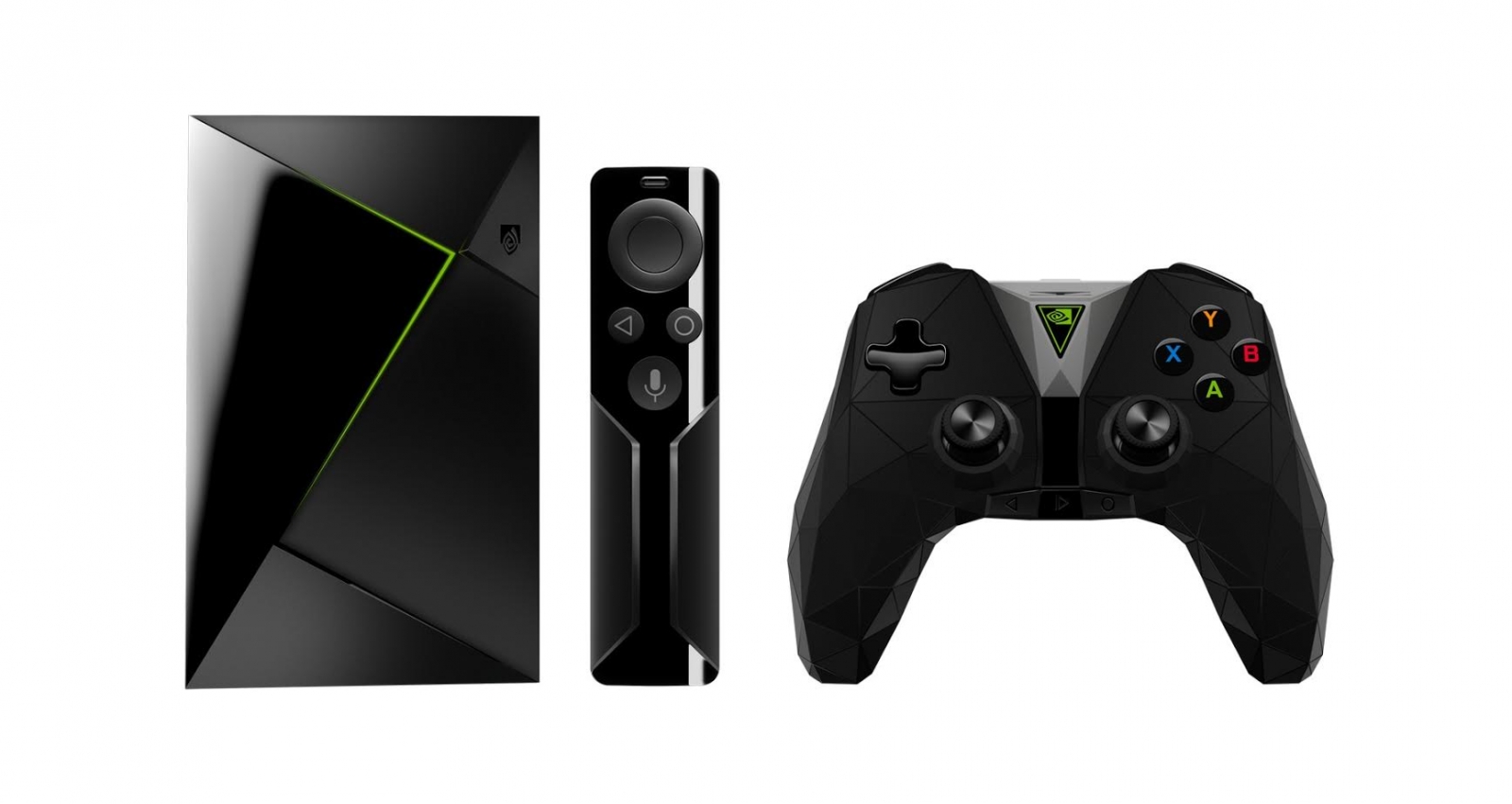 So if you were waiting on a v2 hub, or TV integration, you could get this instead.

St, so far behind and falling even further behind. The biggest show of the year and they have nothing, in fact less than nothing to show.

Everything points to SmartThings falling out of favor with Samsung. Notice that all recently announced integrations are with third-party devices and services. No new integrations with Samsung-branded devices. Even those that were announced last year are all but scrapped. I won’t be surprised if Samsung will be looking to spin off SmartThings or offload it to the highest bidder in the near future.

More like boxee. Absorb the key engineers, and can the rest. Kill off base product and rely on others for hardware. As seen by the stealth announcement of nvidia shield as a hub integration.

Many conflicting reports on what exactly the Nvidia device is going to have. There are no details officially released.

One set of journalist reports says that it will include hardware that will be the equivalent of a smartthings hub.

But another set of journalist reports says that the SmartThings integration will be through the Google assistant which they are adding to android TV.

Since it also features Google Assistant, it is also compatible with Samsung’s SmartThings platform, letting you control your smart home.

Has anybody seen an official Nvidia announcement that clarifies this? It’s a big difference.

Nvidia press release stated it would be able to act as a hub and control devices.

Nvidia press release stated it would be able to act as a hub and control devices.

I know, but a lot of people say the echo “acts as a hub.” It doesn’t have a Z wave radio.

And “hub” is a term to get used a lot with regard to home theaters, when what they really mean is “control center.”

I’m not saying it won’t have radios in it, I just haven’t seen any engineering specs that say it will,

And the same official release said that there would be an over the air update to existing Nvidia shield devices that would give them all of the new features except hands-free listening. If that’s true, no radios.

Thanks for checking. Very interesting! Just as interesting that this wasn’t a big SmartThings announcement…

Yeah, it also means that the extend USB support for Samsung TVs will probably launch after Nvidia Shield TV support… Hmmmmm, wonder if it really is that easy to develop on Tizen vs Android (Shield runs android tv)?

Can confirm @pstuart statment. Have a friend sitting in a demo with Nvidia right now txt’ing me. He sees the usb stick right in front of him… I was like, well you are probably the only person seeing one lol

Got my friend to take a quick little sneaky snap… I mean it is a presser so its not like its meant to be secret. 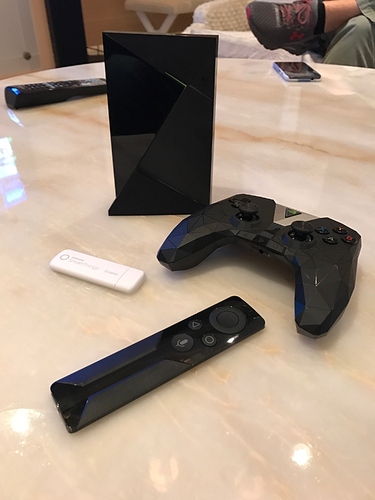 i was about to say, the spec sheet on their website only lists wifi, Bluetooth and Captive portal support. No z-wave or zigbee radios.