About 2 days as I recall. I applied about 5 days ago.

Ahhhhhh. It works. Didn’t realize the PWS: part needed to be there

I didn’t actually know the BloomSky could be connected to WU as a PWS, but if so, then that means that two major weather networks will (or, at least, could) benefit from the advent of this new device (i.e. I assume you can have it connected to both). Cool!

EDIT: I just looked in my PWS on WU, and BloomSky is indeed in the list of hardware.

p.s. I just got a notification from UPS that there is a package from BloomSky on it’s way. Yay!

Hoping it comes by the end of nest week.

What do you mean you missed the first one. You applied multiple times?

I did because I applied over a week ago and never saw it come through, I had cleared out my SPAM folder since then and can only assume it got tossed as I didn’t think to look there for it. So I used a different email the second time and it showed up in Spam within a day or so. 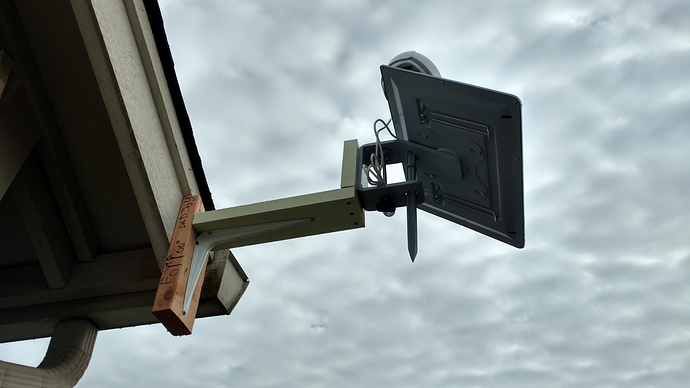 I couldn’t help but move it. It’s on there solid, but this summer I am going to build a different bracket. I moved to the eve that was previously above it.

The cord from the solar panel is 6 ft long, I measured it when I moved it. 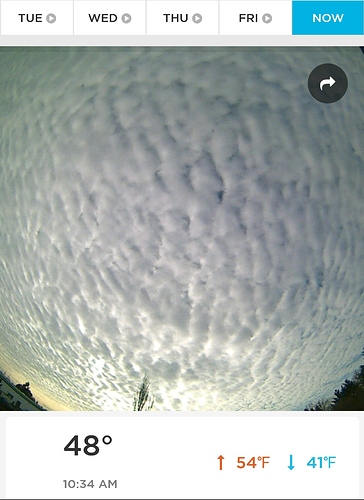 I wonder what kind of range these have. I have a shed about 100 feet from my house that would be a perfect mounting point

Wifi is the limiting factor. If you have Wifi out there it will work.

mine shipped today woot!!! $20 for a weather station with the only caveat being they get to have access for 6 months not too shabby.Jsut put it on the isolated guest network for security and call it a day.

Seems like the distance you created from the house with that slick bracket may be sufficient (for our generalized purposes) to mitigate most of any heat that could otherwise be skewing its readings. I mean, of course, the scientist in me says it could still be picking up radiation from the house, but wow…what…maybe half a degree or something? Ya, I think you’re set.

Now my only question is…"How windy is it where you live?"
I may find it hard to keep it on the house if I were to mount it like that in my area.

The farther it is from your access point the more battery will be used to power the radio. Just something to keep in mind. I’m sure over time we’ll all get an understanding of how the solar and battery is on these but right now that’s one of the big unknowns.

That corner of the house is blocked from most wind, according to my 5 years of living there. Of course if a crosswind blows, then that will make a difference.

I wanted it up high to get an unobstructed view, and away from my roof when that elusive direct sun shows up and reflects heat.

Now that it’s set, I think it’s pretty cool, and I like it. I want one for the front yard, but can’t justify it. Plus I have a Dropcam covering that area that shows me plenty of sky.

I applied this morning. Haven’t received a reply yet. Maybe just b/c it is Saturday… Nothing in the span folder so far.

Me too, let’s see who gets it first!

I got my shipping info today! The roof option looks promising…

Waiting also, I applied yesterday, nothing in the spam folder.

The app has a battery indicator for each device. And I happen to have a wifi extender nearby inside, for my upstairs Fire stick.

So what sensors appear in this app? What is the purpose of this app in relation to the Bloomsky?