Hi Josh,
Just wanted to say thank you so much for the time and energy put towards this. Please let us know when the wink app is no longer needed. I just set my relay up, and am not logging in to wink. Again, many thanks!

Hi !
He work perfectly , thank you! But ActionTiles is not able update state of child device, only parent devices.

Is it possible to fix that ???

I guess the only issue I can think of now is organization. If I had 3 or 4 Relays in my system…would all the individual switches be shown as Relay Switch 1 and Relay Switch 2? Is there a way to name them?

Please let us know when the wink app is no longer needed. I just set my relay up, and am not logging in to wink.

Will do. I need to do some work on preventing android from killing the services when they’re not in the foreground. Android has a tendency to kill off background services by default, but there are a few steps I should be able to take to make it extremely unlikely that Android will kill off the STWinkRelay services.

But ActionTiles is not able update state of child device, only parent devices.

This sounds more like a question for the ActionTiles guys. Maybe @tgauchat has some thoughts?

I tested with SharpTools and I’m able to see the state of the child devices and parent devices. 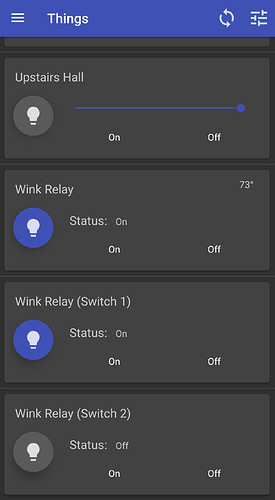 @T1tentrum said: But ActionTiles is not able update state of child device, only parent devices.

This sounds more like a question for the ActionTiles guys. Maybe @tgauchat has some thoughts?

ActionTiles will reflect the state of any device / Thing that is authorized to the “ActionTiles V6 (Connect)” SmartApp: As long as the Device conforms 100% to a standard Capability.

Seems to load fine based on a quick test.

@T1tentrum does the SmartThings app reflect the state of the individual switches properly?

but if I control the switch from SmartThings or using the parent switch, the child switch doesn’t stay in sync in ActionTiles.

Does the state of Attribute “switch” (not “switch1” or “switch2” or any variation thereof) show the update in the IDE under My Devices / Current States?

Events received by ActionTiles should also be observable in Live Logging.

The events show up, but there’s something else weird going on as if I setup a push event on a child device with SharpTools I don’t get the push events either (but I can query the device status and get the correct status). IIRC, ActionTiles is dependent on push events too, so I’d hazard a guess it’s related.

I’ll look into it further… maybe run some tests with the sample virtual composite DTH SmartThings put together as it could just be something fundamentally weird with composite devices and the way the child calls actions in the parent and the parent updates state in the children.

in smartthings the condition of the child device is reflected very quickly but the state of the parents is very long and sometimes I refresh manually.

if I go to smartthings and go to ActionTilesV6 and just press save. ActionTiles will put the switches in good condition?

if I go to smartthings and go to ActionTilesV6 and just press save. ActionTiles will put the switches in good condition?

It should force sync to the current values shown in Current States in the IDE. Give it a try? 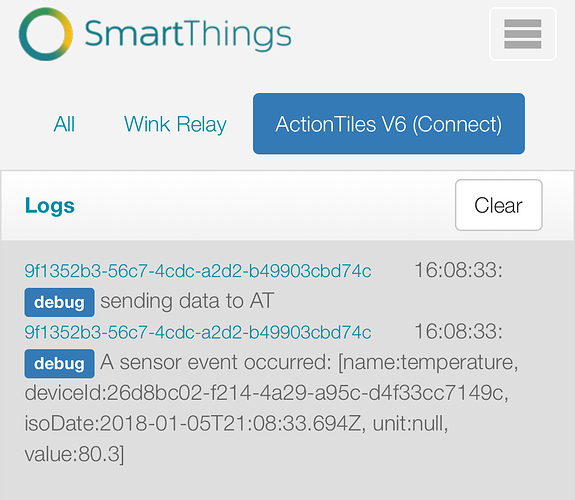 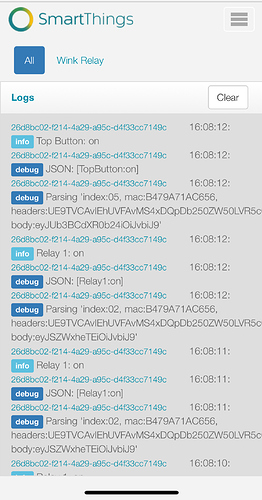 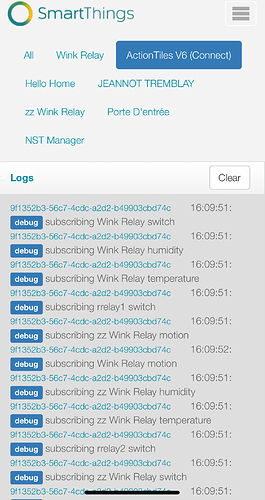 I push top button on wink relay. After, I push SAVE on ActionTilesV6 and my switch synchronized.

It looks like the child devices not updating their state properly is a known platform issue affecting multiple device handlers:

Hey everyone, Ok, after talking to an ST engineer, we’ve found the issue and it explains why only Inovelli 2-Channel devices are affected. Long story short, the calls to the child devices aren’t working properly. In other words, the call to, “childDevice.sendEvent” is not returning anything and they have confirmed they are still having cloud issues (as you all know our custom handler operates in the cloud – vs locally – because it’s a custom handler) For more info about the childDevice.sendEvent issues, please see here: So, while I know this doesn’t help things work – it does explain why it’s not working (while your other non-multi-channel devices are). Hang in there guys, we’ll all get through it together! -Eric

childDevice.sendEvent no longer works as of 4 days ago Writing Device Types

I have a DTH that has worked perfectly for the past year that suddenly stop updating properly a few days ago. For some reason I can’t send “switch” events to child devices. I can update all other custom attributes with sendEvents but not “switch” events. In the code below, it does not throw any errors in the logs but the “each loop” gets broken and does not update the switch attribute for all the child devices. If I remove the 2 lines (commented out below) the “each loop” completes. Anyone know what’s changed or how I can fix this? def fanSync(whichFan) { def children = getChildDevices() children.each {child-> def childSpeedVal = child.getDataValue('speedVal') if(childSpeedVal == whichFan) { child.sendEvent(name:"fanSpeed", value:"on${childSpeedVal}") …

Once the platform issues are resolved, I would expect the event issues with Wink Relay child switches to be resolved.

The main UI of SharpTools queries the state of the device when the app is first loaded and can refresh the state every X seconds. ActionTiles uses event subscriptions and push events to update the dashboard.

This is also why the main UI of SharpTools stays up to date as it manually refreshes, but subscriptions against the child switches for Tasker or widgets would not stay in sync as they rely on the subscriptions/events.

Just an update that the issues with the ‘switch’ attributes not staying in sync are expected to be fixed in the next SmartThings platform deployment.

The problem is with the isComponent=true on the call to addChildDevice around line 128. If you set it to false and delete and re-add your Wink Relay it should work, but this also shows the child switches individually in the main list and with a number of quirks since the DTH wasn’t designed with this in mind. The issue with Child devices and isComponent=true is expected to be fixed in the next platform deployment, but if it’s absolutely critical to you and you don’t mind the quirks, feel free to make the change to the code and re-add your devices.

thanks you. it works very well. the individual switch in smartthings is very convenient. It remains to be seen that they are going to be quirks.

And in ActionTiles he reflected instantly

Thanks again Joshua and all the others for working on this! I wish I could contribute more but I am not a programmer. Please let me know if you want any logs or testing done on my side. I have 3 Wink Relays and an extensive Smartthings setup. Also have Actiontiles running on them. I have yet to put the push buttons into production on my system, outside of just the manual button presses.

It’s really just waiting on SmartThings for the platform fix at this point. If I remember correctly, they usually push out updates on a weekly basis. It used to be every Tuesday, but I haven’t been paying attention to their timing lately.

SmartThings has pushed out the platform update which resolves the issue with child device state not triggering immediately. Please give it a try and let me know if the child events / states are now showing up in the SmartThings mobile app and third party apps like ActionTiles.