Thanks for the suggestion @JDRoberts however even with the newest iOS app that was launched yesterday time is still a problem - you can set am start times with no problems but when you set a time that you want as pm it saves back to am and it just won’t save - I’ve tried scrolling through the clock, scrolling am to pm etc but no joy ;( I’m not sure if it’s the app itself or the hub firmware (which didn’t update yesterday)

Support have logged the issue about time but thy told me a work around for the time being - set the phone to 24 hour clock and then edit the rules. This is now working so thanks for the advice

I am in the UK and am having trouble adding the motion sensor to the ST app.

Where do I add this? in my app or the Graph portal?

If in the app, when trying to add the device manually, I then go to motion sensors but I do not see the device listed there.

I have published the DH as well as reset the device.

Any ideas where I am going wrong?

If the Motion Sensor is currently tied to the Hue bridge you will need to push the reset button in the back of the Sensor first and then in the app go to My Home, scroll to the bottom and click on ‘Add a thing’ - this should now start searching for the sensor

Hello, I am using the DH and it is working great, 1 question. When I 1st set it up the red light was blinking when it saw motion, now it is not, any ideas?

Hi.
Mine has been working brilliantly until today.
Red light coming on indicating motion and quick to react.
Now no light and extremely slow to detect motion.
All since the upgrade last night?
Be interested to see if anyone else is getting issues with this device since yesterday.

This update does seem to have messed things up a lot - I’m also not seeing the led come on when there is motion or lights are changing at random.
I couldn’t get CoRE working correctly no matter what different pistons I tried (simple/complex/latching, using groups with valid true/false, using TCP etc) before the update but couldn’t get things just how I wanted them (e.g. Walk into dining room (with one Hue bulb and Hue motion sensor), when lux is below 45 ( lux level below the value the motion sensor went to when a Hue bulb comes on), turn on the light for 5 minutes then turn off with no more motion.
In the end I tried various different smart apps including Lighting Director (which seemed promising) which I installed a couple of days ago but today everything has gone strange - lights coming on at random even though no motion or lux higher than thresholds, or lights not going off when they should, or simple going off after 10 seconds of being on when the timeout was set to 5 minutes. I even tried installing Hue Advanced (Connect) to get better control of the bulbs, thinking it would help the sensors in some way but no joy.

Having issues with the motion sensors after the hub-update here also. The indicator Light doesn’t come on anymore. I tried resetting the hub and thought that fixed it but after some time (30 minutes or so), the red light stopped coming on. It seems Motion is still being reported, but not as quickly as it used to and it seems not reliable.

Really hope the author of the DTH can fix this, as I had quickly grown quite dependent on the Hue Motion sensors working through ST…

My guess is that this is related to the OTA (over the air) zigbee firmware update. People with Osram RGBW bulbs are having the same problem.

What’s happening is that the smart things hub is sending out a message saying that it can do over the air firmware updates now.

Devices are supposed to check in to see if there’s an update for them.

Currently, the smartthings hub will only have updates for the SmartThings branded zigbee devices.

It appears that some other devices think they are supposed to be waiting on an update and are just going into their wait pattern and stop functioning.

You can try going into the IDE, turn off OTA updates for your account, then power down the hub (including taking out the batteries if any) and leave it off power for at least 20 minutes.

When it comes back on power all the zigbee devices should sync up again and this may solve the problem as the hub will no longer be broadcasting its OTA message. In any case this is one of those “can’t hurt might help” procedures which is probably worth trying.

To see if this will work it’s probably worth checking the OTA status (my status is set to disabled so I don’t think this will do me much good): 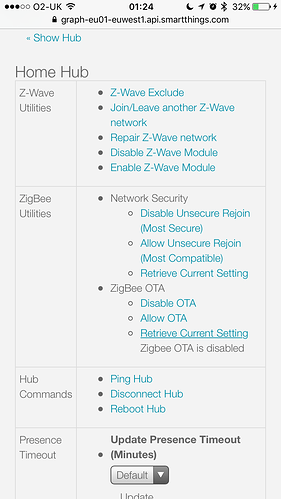 My OTA is on. Trying turning it off right now. Will report shortly.

Since you already have OTA disabled, Have you tried doing a zigbee heal since the update? (Taking the hub off-line for at least 20 minutes?)

Sorry to hear that, but thanks for letting us know. Make sure you put in a support ticket because there’s definitely something that they need to look at.

Regrettably I have been quite busy with other things over the last couple of weeks, However I can add a couple observations to the list.

The update does seem to have fixed (cross my fingers) by Multi Sensors which had never worked properly.

Is it possible to lower the reporting times so that the motion is not off for 30 seconds? Looking to try and reduce the 30 to 60 second window of no motion report.

Thank you for creating this device handler, I have 2 Philips Hue Motion Sensors and have only recently setup SmartThings so wanted to ensure I could re-use them.

I have a couple of ceiling lights in the kitchen, so I setup a side-by-side test where I placed the ST and Hue Sensor next to each other, with the Hue Sensor configured through the DTH and the ST directly, each paired to 1 light. The Hue via DTH was noticeably more sluggish. I then switched the Hue via DTH to Hue via Hue Bridge and it performed identically to the ST direct setup.

Is this related to the sensor/DTH not reporting motion for 60s? If it is, is there a reason why that value is 60s?

Appreciate any assistance, if I can get the Hue Sensor via DTH working as the other setups do I won’t have to replace the two I have!

first of all thanks a lot for providing this DTH. In Germany, the Hue Motion Sensor is quite affordable (30 € if it’s on sale) compared to similar Z-Wave gear. I have four of them and they work really well - most of the time.

What I’ve had happening twice now is that one of the motion sensors just “hangs”, i.e. the status in SmartThings is stuck on “motion” and no new events are reported. One time, the sensor apparently “recovered” from this state over night, but another time I had to remove the battery to get it going again.

I had ZigBee OTA updates enabled when this happend the last time, but if I remember correctly, it also happened with updates disabled (which I think is the default). I turned OTA off to be sure and will report soon.

Events of the device looked like this (screenshot taken at 16:17): 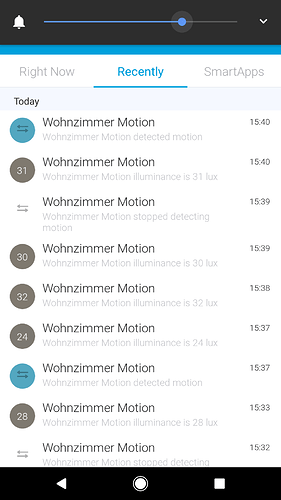 Anyone here with similar issues?

BTW: I have a Hue bridge as well, but joining the the motion sensor there is not really an option because then I wouldn’t be able to control other devices such as SmartThings power outlets which I also use to control lights.

OK I ADDED THE HANDLER AND ADD WHAT EVER NUMBERS I COULD FIND AND TRIED IT UNDER THE DEVICE NETWORK ID FIELD AND STILL NO GO. HOW DO I FIND THE RIGHT ID OR GET ST TO AUTOMATICALLY FIND THE HUE SENSOR?

would you be so kind to use regular spelling insted of ALL CAPS? Thanks.

Install and publish the Hue motion sensor DTH and you can add the sensor like any other afterwards. ST will automatically assign the device handler, no need to enter any IDs manually.

I have four Hue motion sensors and two of them were recognized almost instantly upon removing the plastic strip below the battery. The other two were a bit more diffcult to add, but with a little patience, you will succeed.

You will need a needle to push the setup button on the sensor’s back. The manual isn’t very elaborate concerning resetting/pairing the sensor but the following worked for me: