Thank you for your amazing work. I just got the sensor and loaded up your device handler. No issues finding and installing it right into my things!

Works great, just using the Smart Lighting App to turn on my nursery lights when detect motion but only below 100 lux. I’ll try it during the day to see if it triggers but overall it looks good.

The cheapest motion sensors here in Canada at $39.99 CDN a pop! I’m gonna go load up.

So I have been using CoRE to control Hue lights but don’t think I have the right rules. I want the light to turn on when lux is below 50 and there is Motion and basically if Motion continues, keep the light on. When Motion stops I want to wait about 5 minutes (in case Motion starts again) then turn off at the end of the 5 minutes. This Sensor and bulb are for in a kitchen and directly faces the oven. Obviously you could end up standing in the same place for a couple of minutes (stiring etc) but that’s where the 5 minute catch all would come in. I have been using a Basic piston but the light still goes off after the 5 minutes and doesn’t seem to evaluate the conditions again. Any suggestions how the rule should be built?
Thanks

This works OK for me and the lights will keep on if there is motion. 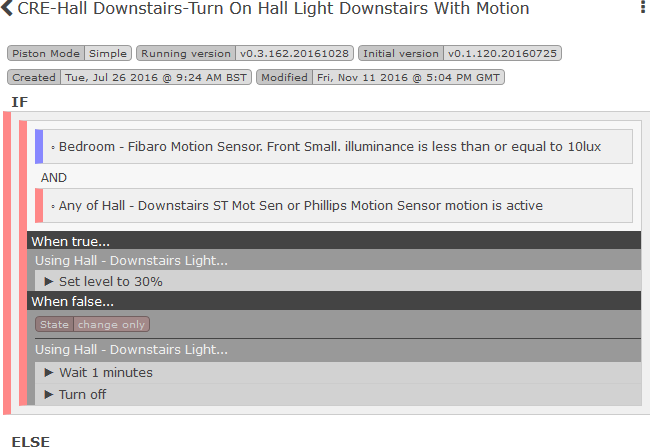 Note the “State - change only”.
Give it a try. Like I said it works for me.

Thanks @bobbles I will give that a try

So I gave your code a go @bobbles and came up with the following: 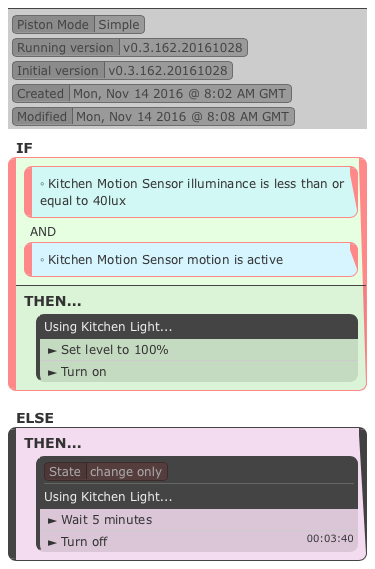 However it still goes off after the 5 minutes, off for about 30 seconds then back on. However when I looked at the dashboard code I can see you have ‘when true’ etc all listed differently. How do you add the ‘when true’ part?
Thanks in advance

The way you have done the piston you need to to enable TCP in the THEN. i.e. cancel on piston state change.

First of all: this is great! I recently started my SmartThings Home automation and bought some Hue Motions Sensors not realizing that where the bulbs are supported, the motion sensors were not (yet).

I’m still familiarizing myself with all this stuff though. Got stuck, did a lot of puzzling/reading but could use some help.

I managed to get the DTH installed and published (I think. As it’s listed and shows as “published” in the IDE). However, when I select “Add a Thing” in the mobile app, there’s no entry there for the sensor? I had expected it under “Sensors” but it isn’t there?

I then manually tried to add it but see I need a “Device ID”? If that’s the way to do it, where would I find it?

So I guess my question is how I get the device to be found or registered in the SmartThings App?

If it is already paired with the Hue hub you need to put a pin in the reset hole on the back and hold the button down until the led on the front starts flashing. Then go into the Smartthings app and search for devices

Thanks!! Totally forgot the reset pin thing need for pairing it.

Does this require you to unpair from the existing Hue bridge to use it in ST or can it retain its default functionality with the Hue Hub?

As @Townsmcp said you need to remove the motion sensor from your Hue Bridge and pair it to the SmartThings Hub directly.

SmartThings supports Hue bulbs connected to the hue Bridge via a polling API, this api does not support outbound notifications. IE You cannot ask the hue bridge to tell you when something happens, you have to keep checking over and over - This would result in too much latency for a useful device handler.

If you really don’t want to shift the motion sensors to the Smartthings hub a work around would be to have a rule setup that says when the bulb comes on that the sensor controls to action something. That worked well for me but you have a lot less control in the long run

II’m starting to loose a bit of faith with these motion sensors being integrated with Smartthings.
I have configured a few different pistons as described above (see pics attached here) and only have one piston working at once for the room in question (other piston is paused so no conflict) but seem to have issues with it all - if the piston hasn’t been triggered for a few hours, when I walk into the room the lights don’t come on. I have to walk out and back in a few times before it works (almost like it’s having to wake up the sensor). I looked at the live logging in My Home - Device - Recently and don’t think the pistons or CoRE are the problem - the sensor just isn’t detecting motion - almost like it is still trying to poll to detect the Hue bridge where it knows its not connected to the hue bridge (sometimes the red led will come on on the sensor). Any suggestions anyone? I know a couple of weeks ago there was a Hue firmware update so the hub and sensors are all on the latest release - Hue hub is version 01036562 and the sensors are 6.1.0.18912 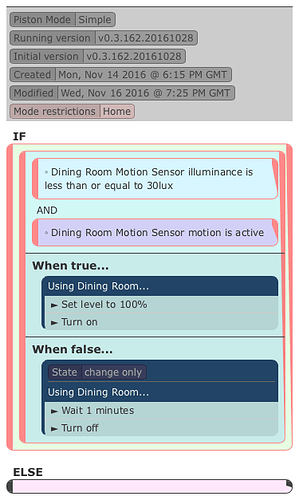 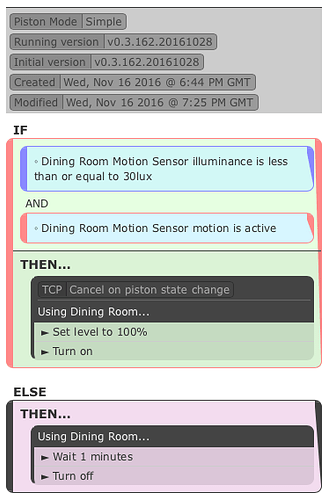 Does the red led on the front of the sensor light up with motion? It should.

IThe red led does come on with motion.
As another example, the family just went upstairs and the upstairs sensor didn’t show any motion at all for at least 2 minutes: 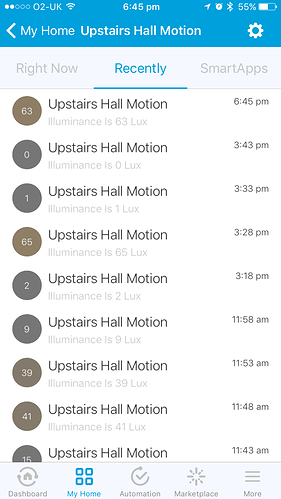 Unfortunately I have not had as much time to work on this as I had hoped. However my 2 sensors are working pretty good for me. I have one in my bathroom and one in the kitchen both turn on within about 15 seconds of me walking into the room. I am using ?Smart Lighting? (whatever the SmartThings one is called) and not CoRE though, CoRE refuses to install for me and I haven’t had the time to look into it - Smart Lighting works good enough for what I need at the moment.

@Townsmcp did you ever adjust any of the sensitivity settings when it was attached to the hue bridge? This sensor has 2 profiles a ZLL one and a ZHA one, This handler uses the ZHA profile as its what you should use when you have a coordinator like the ST Hub, I am not sure exactly which profile HUE uses to talk to the sensor or if the settings get reset when you reset the sensor.

Another thing I just thought of, Are there any small motion sources in the room? I tried to attach one of these to a ceiling fan pointed straight down to avoid the motion of the fan blades, However the slight motion caused by the fan didn’t trigger the sensor but seemed to make it incapable of detecting actual motion in the room. Normally these sensors have a threshold to avoid detecting pets and I think this may have come into play in this case.

PIR sensors, like this one, don’t actually detect motion. Instead, they detect very slight changes in heat moving across the field of detection. The sensor itself should be stationary.

If you put the sensor on a moving device it’s going to have a very difficult time knowing what’s going on.

Also, gusts of air can definitely trigger the sensor, particularly if they are a very in temperature. This is a common problem in the winter as the heat comes on and off intermittently.

All of which is to say any room with a fan is problematic with this type of sensor but in any case you want the sensor to be as far away from Gusts of air as possible and in a stationary position in an area of minimal temperature change.

@Stephen_McLaughlin I know I changed sensitivity on one of the Sensor when on Hue but the others have been left on the default maximum sensitivity.
There are no small Motion spices in the room - no fans etc.

I really appreciate what you have done creating the handler for these.

I might try switching back to Smart Lighting to see how that works. I know it wasn’t complex enough for upstairs Hall way as it doesn’t let you add a second time set (e.g. Full brightness between 6:00 and 20:30 then 15% power level from 20:30 to 6:00.

As a suggestion, use the GitHub integration (the integration now works for European installing,

I might try switching back to Smart Lighting to see how that works. I know it wasn’t complex enough for upstairs Hall way as it doesn’t let you add a second time set (e.g. Full brightness between 6:00 and 20:30 then 15% power level from 20:30 to 6:00.

Can’t you just use two separate automations for this?