I have read of all the different ways to get voice announcements working, but I am wondering, given specific constraints that I will out line, what is the most reliable.

I have the following devices capable in one form or another of making the announcement:

The servers are in a centralized location and can be heard from master bedroom, living and dining rooms and kitchen. The phones can of course be placed anywhere. I need it to play announcements that can be heard in the above areas and I need reliability above all else.

@Atomicpapa
Glen I have just discovered:

I bought a couple of these:

and connected them to a couple of these: 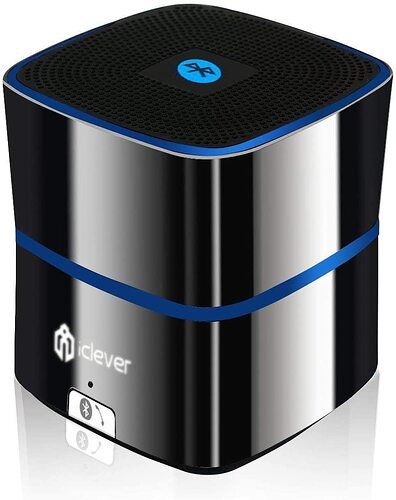 Via a cable rather than Bluetooth - You could use any kind of amplified (PC?) speakers

I have one setup on my upper floor and one setup on the lower floor of my house… You may find that one is sufficient at a central point in the home.

This has worked flawlessly since I installed & configured everything last week and we now benefit from announcements like:

“The dryer has finished so get off your butt and empty it”
“Your darling husband is home!”
“The dragon have arrived”

I have looked into purchasing something like that but I am trying to make something work with what I already have. WAF is higher when I don’t have to buy something to get it working. This is primarily for a mail has arrived alert and a “one of the kids left the freezer door open AGAIN” alert, both based on door open close sensors.

Is “the Dragon” your mother in law too?

Good point. I’ll look into that more. Thanks!

Do you know under English law, the severest sentence for bigamy is…2 mother in laws!

Have you had a chance to look at the following thread? The author was trying to create a voice command system for as little cost as possible, and since his set up also speaks, it might fit some of what you’re looking for. Anyway, it’s a completely different approach than what most community members have taken because he didn’t want to buy additional devices. It’s almost all based on stuff he could run on his existing equipment. So it might be worth a look.

For a LONG time now I’ve been trying to make a smart home for as LITTLE money as possible. Unfortunately, that’s VERY hard to do unless you know how to make all the stuff on your own. I’m not a coder or an engineer…but I’ve got an awesome imagination and problem solving skills. Here’s how I’ve made my small two bedroom apartment…SMARTER than all the rest: What I have: Smart Things Starter Kit (I want to add more, can’t afford it at the moment) Jarvis (LINKS Mark II at www.ai-dot.net) Philips Hue Lights (Six lights total, also want more, can’t afford it) Teamspeak (you’ll understand in a moment) Eventghost (if you’re on a mac…well…lolwut? sorry) Sentry (just a windows security app). IFTTT (www.ifttt.com) So, the first thing I did was install and configure Jarvis with TONS of questions a…

Thanks for always promoting my post JDRoberts. The software is actually moving along quite nicely (the Jarvis software that is) and was most recently upgraded to the third iteration. I guess the big plus to this software than most things you can find, is that it’s integrated with almost all internet connected devices in some way or form, and it’s more customization than any other platform without the need to be a big time coder. Additionally, it has an extremely helpful beta test community who are constantly building new things for the system. Anyways, if you guys have any questions, please feel free to hit me up.

Additionally I just finished setting up a mic/speaker home audio system that covers nearly every single room. Total setup cost me less than $200. The single issue I’m having is that my mics are WAY too sensitive and I’m picking up way too much noise for my speech recognition software to work it properly. I’ll make a video on it sometime soon.

I went and checked out Jarvis and it looks pretty cool. I managed to get my immediate need solved with VLCThing and Core. Nevertheless, I plan on taking a more in depth look at Jarvis. The little bit I have seen so far, I liked!