Frequent use, that might be the ticket - it’s for my wife’s lamp and she’s not in the habit of using the remote yet. The lamp is supposed to be mostly automatic. Still it should live four days - not worth $50 to me as is.

Do we still have to go through a crazy 21 step process to add this switch to SmartThings, or did the folks at SmartThings finally get their act together and start adding more supported devices? Seems like they have not been too proactive here, which is really making me regret choosing them as a home automation solution. Based on the state of the app and their product line it seems like they are asleep at the wheel.

Big thanks to @JDRoberts for going through all that hard work to document this process! You sir are a rockstar. It’s just a shame that it’s such a hassle to do something so simple that so many people want/need to do. The whole idea of a smart home solution like SmartThings is to make this process easy, intuitive, and flexible, but they don’t seem to be holding up to that promise.

In my case, which seems to be rather common, I’m a renter in an older home with no ground wires on all the switches. Also, I’m using Philips Hue bulbs for many locations so I don’t simply want a switch that cuts the power to the bulb but one the triggers events on the SmartThings hub. With my previous solution (X10) I had battery powered wall switches that looked and worked great. It’s a bit scary to think that a horrible and outdated company like X10 is doing some things better than SmartThings.

I find it pretty shocking that SmartThings is 1: not offering a battery powered wall switch in their product line, 2: not being proactive about supporting any of the battery powered switches that are out there, and 3: not more involved here in the community and taking actions on issues like this that are clearly a major oversight.

I reached out to customer support about this issue, and their response was to direct me to this thread. So they are aware there is demand, they are aware they dropped the ball, but their only solution is to pass the buck on to the user community to roll their own complicated solutions.

It’s also a little frustrating that this switch seems to be the only “good” option right now. I’d much rather use something like http://www.amazon.com/GE-45631-Z-Wave-Wireless-Controller/dp/B003OUWABU which is not just a toggle, and much sleeker profile (not 1/2" thick) but the process of getting that switch to work with SmartThings appears to be even more of a nightmare than this switch based on the discussion threads I’ve seen.

I also want to apologize for the negative tone of this post… I’m pretty upset with SmartThings right now, as they seem to be falling apart as a company. I’m in a home with 300mbps internet and the app is super slow (their servers and CDN appear to need more resources), occasionally the app does not even respond. The geofencing occasionally does not detect arrivals and departures. The app is badly needing updates. One of the products I ordered from them (motion detector) does not function (hardware issue), and getting support to resolve that issue has been an uphill battle. And this whole switch issue is the infuriating icing on the frustration cake. When I first saw the product line when they launched I had such high hopes, but at every turn the seem to be letting me down.

THANK YOU SOO MUCH!!! Followed the instructions and got it set up. Works great. Gonna buy more for my house. Took me about half 20 minutes to setup following these instructions (make sure you read them carefully especially about what you do on the web vs what you do on your phone) but everything works great and I am so freakin happy!!!

Here’s what the light switch looks like after its all setup. Bought two of these and both my wife and I have been very happy with how easy it is to use.

Any chance of tweaking the code to trigger a Routine or an IFTTT action?

Any chance of tweaking the code to trigger a Routine or an IFTTT action?

I’m not sure I understand your question. This is a button controller device type, it can already be used for routines or IFTTT recipes (via a virtual switch).

Just have the toggle (button press) turn on a virtual switch, then have the virtual switch tied to a routine, or use that switch as the “if” in an IFTTT recipe.

If you don’t know how to create a virtual switch, see the following FAQ.

If you don’t know how to use a virtual switch to start a routine, Alexa Helper is a good smartapp for this. (If it seems too complicated, there are simpler ones in the Marketplace section of the mobile app under lights and switches.)

All, Be sure to read this thread…newer version is listed below Been quiet lately installing more Echo’s in the house along with the V2 hub. Everything is good and I am taking a more ST approach to my homes, getting rid if IP devices and replacing them with ST compatible items (Samsung SmartCams replacing DropCams, a ZWave garage door opener instead of Chamberlain’s model, etc). Anyway, I am 100% in to home automation. As such, I re-looked at my Alexa Helper app. ST has been a bit slow in reviewing submitted apps, so I took an opportunity to update this app. One of the limitations of the platform is the inability to have more than 4 scheduled items within an app. To get around this, you must install the app multiple times. In the original Alexa Helper there were 6 slots, but only 4 that …

To assign a specific toggle to the virtual switch, just use Smart Lighting. 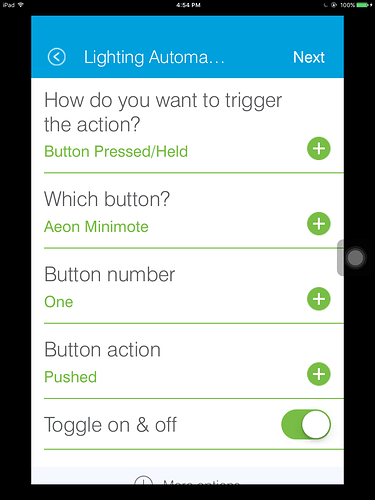 Or did I misunderstand the question?

He asked this in 2 different threads it seems as I just answered this in the other thread.

At least we both gave him the same solution of using a virtual switch!

WifeButton = “Just push this button to turn on the furnace, honey…”

I just got this switch, and have it added and published. I’m having issues with steps 14-20. i don’t have a button up top that says “My Device Types”. What gives?

I got this working thanks for the help.

Im in the UK but have a US HUB V1 (Naughty me i know - illegal radio frequency etc blah blah blah , but i find the US have much better zwave products than the UK, so its better for me haha)

anyways my point, does anyone know of an online retailer that will ship to the UK for this product as im really struggling to locate them online ?

Does anyone know if this device supports Long Press/Held Button?

This device type does not of course however does the device itself have the capability? Is there a different Device Type out there that works for Long Press/Held?

The device itself doesn’t report hold duration, so you can’t get it. Each switch acts as a toggle.

Thank you so much for such a nice detailed set of installation instructions!

Just wondering whether anyone has successfully set up more than one of these button controller devices. My second one is in the network and recognizes button pushes, but it seems I can only associate one device with Button Controller. In my Smart Apps, the Button Controller has both devices for me to choose from. However, if I choose my second device, then the first one doesn’t work anymore.

Each button controller smartapp instance can only be associated with one device. This is true whether it is the minimote, securifi key fob, the smartenIT 3 toggle, whatever.

Fortunately, you can have multiple copies of a smart app.

So just follow the instructions a second time for the second device, but change the name of the smartapp to be something else just so you can tell them apart.

Thank you so much! After going to Marketplace -> SmartApps tab -> More to select “Button Controller”, then clicking “Install” to install the Button Controller for my second device, it worked just fine. I didn’t find any place where I can change the name of the SmartApp though, so I have two “Button Controller” showing up in my list of Smartapps that are being used by My Things… But this is fine… when I click Button Controller, the first screen shows up tells me which device that Button Controller is associated with. Thanks again!

This didn’t work for me. I added the device, set it to the custom device handler, hit the “Configure” button from the custom Device Handler screen, and here’s where I am:

I can view the switch in the ST app and it shows three buttons as “released.” Pressing any buttons on the switch doesn’t change the “released” text to anything; should it say “pushed” or something similar? I set up Button Controller to work with it but it doesn’t work. After I hit the Configure button, this was the only output I got:

Should there have been more output here? Is my switch supposed to blink when I push a button (because it doesn’t)? Maybe I got a faulty unit? Any ideas?

EDIT: got it going. I used the bind procedure instead of the join procedure. Just to reiterate what’s already been said in here before, don’t use the program button to associate it with SmartThings!

I’ve had a couple of these for a while and they work ok. I have them in places where my lighting is either mostly automated or I can use Alexa instead of a switch so I don’t have to use the buttons very often but I notice that when I do I usually have to hit the button twice to get it to trigger an event if I haven’t used it pretty recently. Does anyone else have this problem?