I have the newer Multipurpose Sensor from samsung (GP-U999SJVLAAA) that takes cr2450.

The freezer will kill it in no time is there a better temp sensor more suited for a freezer?

I would use a probe attached to a sensor. That way the sensor lives outside the freezer and isn’t subject to the harsh environment. For example:

You could also see what other people have done by just searching the forum for “freezer.”

Yeah but most are dated was hoping something new was around. Does no one make a smartthings compatible sensor with a probe.

Yeah but most are dated was hoping something new was around. Does no one make a smartthings compatible sensor with a probe.

Same as described in the various freezer projects, it all works well.

You buy the probe separately, it’s just a dumb analog probe. You attach it to a smartthings compatible device which can read the probe, I think most people use Fibaro, they have two or three different models that will work.

I know people are still using this DTH:

is there a better temp sensor more suited for a freezer?

I’ve had Iris open/close sensors in 3 freezers working without a problem since the gen 2 version was released. All I’ve had to do is set an offset, but so far so good. I’d say since 2016 maybe? I’ve only had to replace the battery once since putting them in there.

The ones from lowes?

BTW is there a way to log high/low temps? That is easy to figure out or will that just use more battery?

For the ~ 3 months that I have owned the 2018 versions of the Samsung Sensors, the multipurpose sensor has consumed the most battery energy compared to the motion and leak sensors. This is in a mainly empty vacation home, All are at about 50 degrees ambient temperature. There is roughly 70 % battery reading for the two multipupose sensors, and 90% + for the 3 leak and 1 motion sensors. One of my multipurpose sensors is sitting in a crawl space, so there is no opening or closing as well as motion, so i can not explain the comparatively increase battery consumption.

I would try a leak sensor if you are insistent on using a samsung sensor and worried about battery life. I would also add that possibly the motion sensing inside a freezer opening and closing may be a source of increased energy consumption of the sensor.

The ones from lowes?

Yup, those are the ones.

BTW is there a way to log high/low temps? That is easy to figure out or will that just use more battery?

Doing this won’t use up batteries, but it will require a smartapp to log data to Google sheets or other solution, or use a custom DTH to display it in the mobile app. I’ve done something similar with a moisture sensor using a DTH: 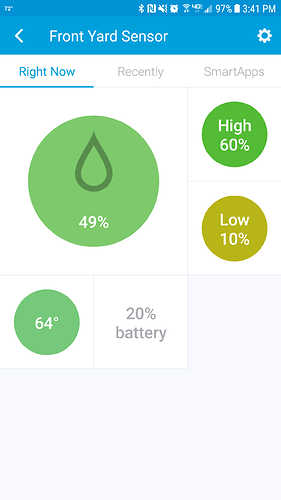 What smartapp do i need? I have seen there is a way to make charts but it looks like it was over my head.

I will use other sensors it does not have to be samsung.

This SmartApp is no longer supported because SmartThings made some changes to the way events are handled which has impacted some users and it will most likely completely stop working in the near future. There’s another SmartApp called something like Google Sheets Logger that subscribes to the events instead of retrieving them from the device history so it most likely won’t have the same issues as this one. Simple Event Logger is a fully customizable SmartApp that allows you to accurately log all device activity to a Google Sheets Spreadsheet. Each event is stored on a separate row so that you have their exact time and details. Google Sheets has an easy to use filter feature which allows you to do things like view all events for specific device(s), in a specified date/range and/or specif…

I’m not using it right now, but it’s easy to set up and use.

Thanks i have it installed and working!

Just my 2 cents worth of wisdom on batteries : first, % battery levels are not very accurate for Lithium batteries (too flat a discharge curve), so a 10-20% difference between two batteries/sensors may be highly significant… or not.

Second, battery consumption of Z-wave devices depends on multiple factors, including the type of sensor, the Z-wave or Z-wave+ type of network, its handler (wakeUpInterval), but also the quality (or lack of) of the Z-wave network the sensor is included into (poor quality => more transmission retries => lower battery life).

Third, battery operated sensors start behaving erratically when their battery becomes too low, “too low” being below 40-50%.

Fourth, when the battery level becomes too low, the reported battery level itself shown by the SmartThings App may be completely wrong since… reporting any battery level requires a good enough battery !
A 20-30% displayed level may actually date back to several weeks/months and be completely obsolete, with the actual value MUCH lower.
I recently had to modify my custom handler for the FIBARO FGK-10x after discovering (4 years later !) such a bug. Many other sensors and handlers may suffer from the same low-battery vulnerability.

Are there any sensors with a probe that are not battery powered?

If that’s an Iris device, that is typical behavior, even at room ambient. The first or second non-100% battery reporting levels (you may see it report 67% relatively soon) are reached quickly then plateau there for months. I too have been using the Iris contact sensor in my freezer (zero degrees F) and recently replaced its battery after almost two years of operation, and it was still working when I did so. As I recall the last 6 months or so it was reporting 33% yet worked fine.

Full disclosure, I have had one or two Iris sensors (usually a motion detector) eat batteries. In one case relocating it solved the problem; the other might have been a dud from the factory.

Mine that are in freezers are also reporting low, but for months and months now.

Are there any sensors with a probe that are not battery powered?

You can attach a probe to the following mains-powered device. But it’s expensive.

The battery powerd one every one recommends is not sold on amazon at the moment but there is a version 2 not sure if it has the same functionality.

I’m using the older SmartThings branded multipurpose sensors in both of my freezers. I took the original batteries out and soldered on a 2x AA battery holder. I’m just using Amazon Basics AA’s in the battery holder. Then I used double sided tape to stick the sensor to the battery pack. So far the batteries have held up very well!

I got the battery packs on eBay for just a few bucks.

That’s a good idea i guess as long as you keep it at 3v it would not matter.

I wouldn’t put much stock into battery readings. Also, you might want to switch out the sensor. The Iris Contacts have been proven to withstand cold temperatures and the batteries last quite a while.

This is a Visonic Contact on my mailbox that not only read very low for months but now reads in the negative and still reports! 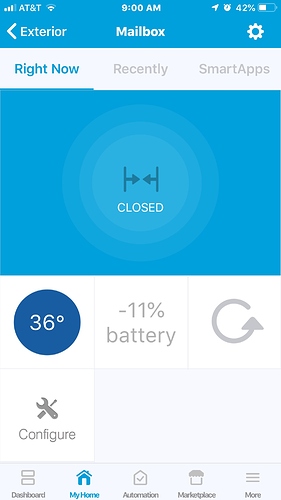 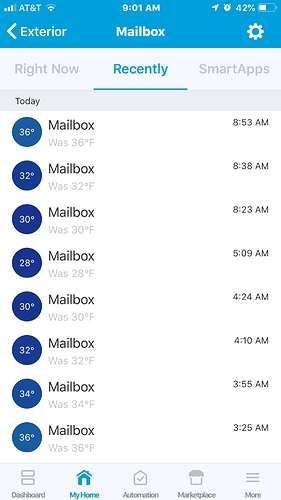