I’ve been interested in motorizing the tilt of my horizontal binds and integrating it with my SmartThings system. I’ve been following this and other Somfy related threads to get configuration and installation tips and ideas. After reviewing the Somfy solution - purchasing the tilt motor ($200 - one per blind), a remote ($35 - $200 depending on model and the cheapest only controls one motor) and an RTS-Z-Wave interface module ($250+ you only need one), I determined that the total cost to automate my 1st floor alone approached $2500 for the materials alone. Double that amount should I want to motorize the blinds on the 2nd floor. As we stepped back to look at it, the $5K in materials cost (plus installation) to save me the 3 seconds/window it takes to manually tilt the blinds myself seemed - wasteful. For some, it may be a great investment but not for me.

It was this Spark Core/Particle Photon solution that interested me the most. It seems to fit my use case to automate the tilting of the blinds on sunrise/sunset and/or as a result of being triggered by routines or SmartApp commands. The price point per window was also attractive. Finally, I have a passion and interest in DIY and this solution seems to fit that bill!

So, as a proof of concept for my home and use case, I’ve ordered the following for installation/testing on one window:
From ServoCity.com

From Sparkfun.com (I used them vs. store.particle.io because shipping was cheaper)

The ServoCity order has already shipped, but no word yet from Sparkfun. I hope to receive all the materials by this coming weekend so I can assemble and test my setup. I hope to document well my journey and post successes, failures, and questions as I progress.

I do have one question for this Community:
Because I do not yet understand the capabilities of the Photon, would it be possible for it to control the actions of two servos? I have several windows that are next to each other. It would certainly be helpful if one control device could manage one, if not more servos and hence one Photon could operate two or more blinds.

Yes it is pretty easy in fact. You would just need to have two lines of writes, one for each servo. As long as you do this sequentially you should not have power problems either.

Thanks, @jjhtpc! I"m going to order another servo motor today. I’ll test the one-to-one relationship first then try your suggestion for the one-to-many servo. Let the adventure continue!

This is a great idea! This could probably be done using an Arduino and Smartthings shield too.

Yes this absolutely could be set up with arduino and a shield. The particle photon is just a cheaper all in one solution. Of course the advantage of the shield would be z-wave which does not introduce the particle stack to the communication path for a command. That said I have rarely had a problem with SmartThings to particle, and between blinds and led strips I have 10 particles in my setup with my 3 more coming soon for kitchen under cabinet lighting. (That project can be seen here: Particle Photon/Spark Core RGB WS2812B
)

That’s a good point about the price. The Photon is also smaller too so it would be easier to hide.

First off I want to say thanks to everyone working on this great project! This has inspired me to take a stab at it. I have been working with an Arduino Uno, Smartthings Shield, and a Futaba S3003 servo.

I am very new to this entire code writing thing… This is my first project so I have been doing a lot of reading and watching videos. I have even been on UpWork, hiring people to help me with code writing. So far I can see the shield in my system. I have downloaded some code that someone on Upwork help write. I have also downloaded code to the Arduino… When I hit the switch the servo moves but doesn’t do what i’m wanting…

So I ordered a complete starter kit for the Arduino and Im going to keep experimenting until I get it right.

Since I have read this post, I have also ordered the Photon unit and Im going to give it a try as you all have already created the code.

If there is someone out there that has the time and woudl like to help me with the Arduino/Smarthtings Shield, I would be very grateful.

Hers some photos of what I have. 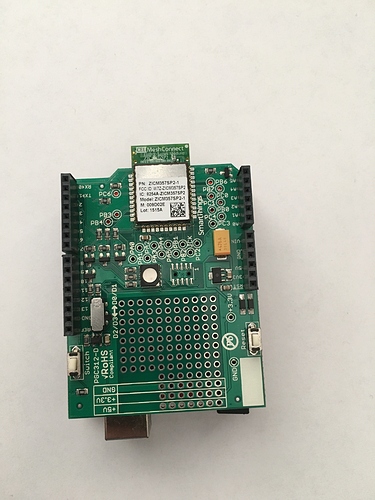 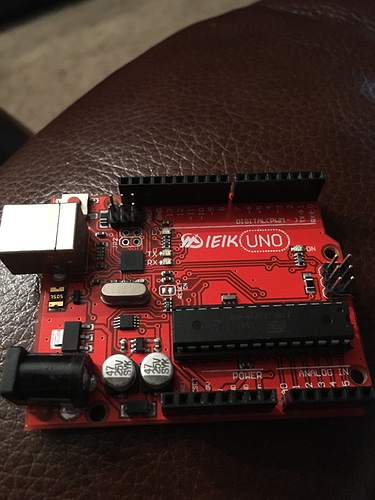 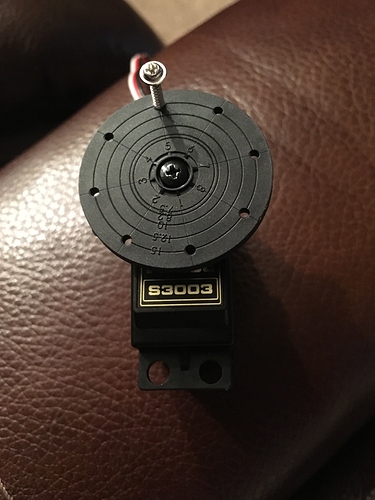 Hello and welcome! For future reference you can just edit your original post to update it. Have you looked at the code that’s been posted throughout this thread?

They are mostly on the “Spark” platform but the code is similar. Although the SmartThings shield makes it a bit different.

Bottom line. Post what you have if you want help. Get a GitHub account and upload your code there, then link it here.

I have read this entire thread and have looked at the code… But to be completely honest, I have no Idea what im looking at. Its all gibberish to me right now. Im still trying to figure this all out… I have a book and Im going to study up on a few things.

I did order the Photon and it arrived today. So im going to try what you all have already made. Ill let you know how it goes.

I did start a GitHub account. I haven’t messed with it much yet but Ill look around and figure out how to link it here.

No problem. I personally prefer the photon over arduino + SmartThings Shield. Although theoretically the later combination could afford you local control. If that doesn’t make any sense read up on that too.

Local control… With the Smartthings hub version 2? Instead of requiring a connection to the internet it handles it locally on the V2 hub?

…sometimes. And I think the verdict is still out on the ST shield as far as possibility. It’s all a bit messy but would definitely be more difficult with the photon. Something I wouldn’t even think of tackling.

Im trying to get this working with the Photon…
So far I have added the Photon to my Spark/Particle device list.
Flashed the code from Github on the Photon.
Created a device in smarthtings and added the smarttings side of the code.

The Photon is showing up in the smartthings app but everytime try the simulator I get the following error… “error groovyx.net.http.HttpResponseException: Forbidden @ line 91”

What am I missing?
What is a Spark access token?

It’s been a while since my last update, I hadn’t been working on the project too much but now that I had some spare time here is a short update.

I purchased a Futaba S3305 ($35 on amazon) which delivers a torque of 8.9kg-cm vs 4.1 kg-cm of the S3003.
Unfortunately even with more than twice the torque, there are still points where the motor will stall.
I tested it with an external power supply to provide 6v vs 4.8v on the Photon voltage input to make sure the current wasn’t an issue. At points where it cannot turn, I see current draw of up to 1.2 A.

So far I’ve only tried it on one blind which was not that big size-wise.
I’m pretty frustrated now at the lack of torque to turn the blinds and I’m not sure what else could be the problem. All of my other blinds are bigger which will make this project even more difficult to realize.

I’ve posted some photos of my setup. If there are any tips on mechanically what could be snagging the shaft from spinning then please let me know. Do any of you have the similar type of blind? Thanks! 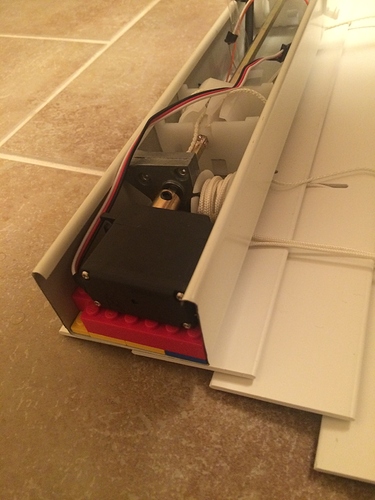 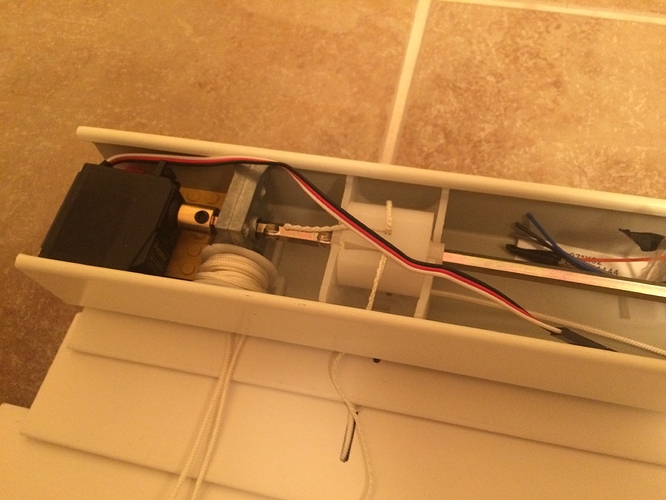 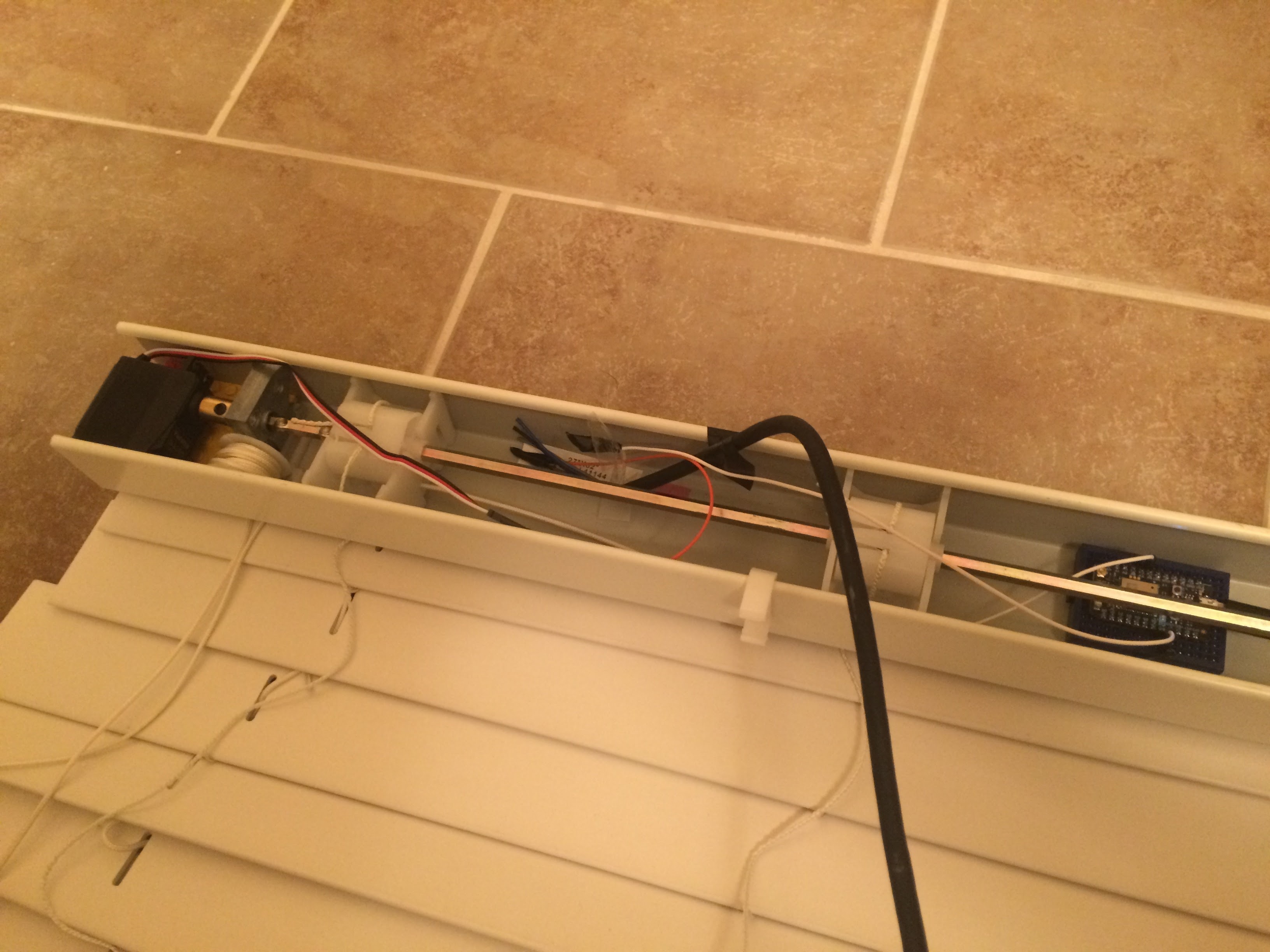 You have to enter your unique deviceId and token in order to speak with the device.
It should be in your particle dashboard (dashboard.particle.io), enter that in your smartthings photon device settings (use the smartthings ide web-page).

Do you think the pull cord mechanism is causing some drag? Can oyu remove the pull cord and the silver square box just to the right of the servo and go directly on the shaft?