Ok guys/gals, I know this might be out here somewhere already, and I know it’s not exactly a “Smart Things” related topic, per se, but I couldn’t find anything related. (how’s <that for a run on sentence haha) So, here goes!

I’m looking to setup tablets in my kids rooms so that I can view/talk to them and vice versa when needed (they’re 8 and 4).

I can’t find anything to do both audio and video. Is it truly possible that such an app doesn’t exist? It’s 2017!

HAAAALLLLPPPP!!! I would seriously pay GOOD money for an app that can do this intuitively!

I’d also like to know if there’s anything like the above that could be used to stream said video/audio to a SmartTiles panel. I’m just about to setup SmartTiles in the next few days and put a tablet at the entry to our home and it would be nice to be able to do video/audio chat to any other devices from there and/or mobile devices.

Not quite what you were asking for, but there is this: https://nucleuslife.com/

Thanks for the suggestion, but their solution is all “inclusive”. I don’t want to rely on their hardware/software completely. I’m looking for an APP that’s andriod/ios compatible that can allow me to setup my own video intercom system.

@ZebraBlinds has been investigating this for a few months:

In house communication/intercom apps to combine with SmartTiles? Projects & Stories

Ok, so I have the following setup at home: Tablets with smarttiles & lannouncer in 5 key areas: Main foyer, second floor common area, kitchen, basement office & family room and every family member has a smartphone. Anyone know of any good apps that will run in the background to work almost like an intercom system? So it can be installed in all the tablets and phones and as long as the device is within the geo fence it works?

A lot of people just use Skype, but that isn’t really kid friendly. I understand the objections to having a separate dedicated device just for the intercom, but the nucleus is getting a lot of really positive reviews from people who have young kids. And the price has come down quite a bit since it was first released.

Lowes is carrying it in store now, so it’s easy to try and return if it doesn’t work for you. 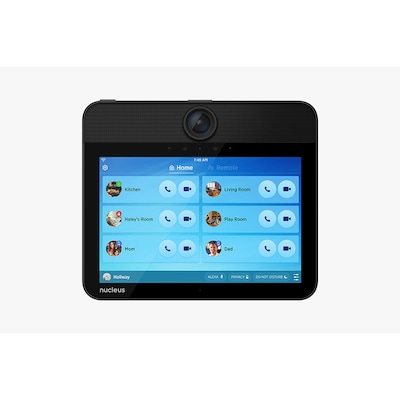 I was very skeptical of this when it was first announced, and it’s true that it did launch with fewer features than the kickstarter campaign promised, but for what it is it seems to be a good product if it fits your budget.