Arming and disarming other than by phone or tablet

I am new to the smartthings community and need some fast help with an issue.
If anyone happens to know a good numeric keypad to Arm and disarm the security system such as the Iris keypad or suggestions on other ways on arming outside of a cell phone or tablet I would like to know more.
I hoping to find something below $50 and if fast and easy to install. I would usually try to shop and research this by myself, but I am on a time crunch here which came up after the police were pounding at my door at 1am after they found my 3 year old sleep walking a block away from my home. This was just after midnight and they had the k9 unit track his path back to our house.
Currently I am setup with door sensors and a siren but the wife and older child need away to arm and disarm the system manually.

The following lists all the buttons that work with SmartThings. Some are battery-operated and some are mains-powered intended for being mounted on the wall, so read the descriptions carefully.

Once you have one you like, you just assign the button to start the routine. Create a routine to set the SHM armed state to what you want. Towards the end of the set up wizard for the routine there will be an option to “automatically perform the routine when”. Select that, and then on the next page you will be able to select “when a button is pressed” and that’s where you will specify which device and which button.

The remotec 90 is a popular multibutton wall mount device. It has eight buttons and each button can do tap, double tap, and long press. It’s about the size of a single light switch, but typically mounted horizontally. The handheld minimote is also very popular. But there are a lot of choices, just see the FAQ.

If you want something with a pin pad to mount outside the home, then either the Iris keypad or the Zipato benext can work, but both are more complex to set up than just one of the button devices.

On the other hand, you can probably pick up the iris keypad at your local Lowes, so there’s that.

pretty cool they tracked him back, assuming it was quick.

Lowe's is bringing 'smart home' centers to its stores just in time for the...

Lowe's is launching so-called stores within its stores, in a partnership with b8ta, to sell and educate shoppers on smart home products.

You never know until you see what actually gets released. (By the way it’s “Iris,” not “Irish,” just in case that affects any searches.)

You can buy the keypad from Amazon, but it’s usually cheaper in the Lowe’s stores. 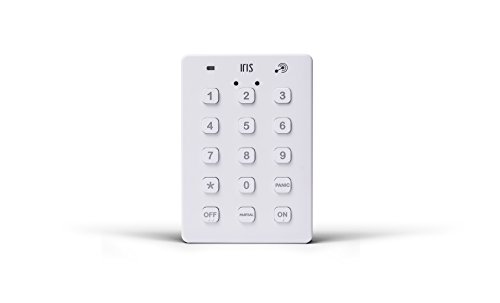 Arm and disarm your security system, receive notifications on who is coming and going by assigning unique pin codes and more with the Iris Keypad. The Iris Smart Hub is required to connect the Keypad ...

Thanks on the Irish mistake, although I am Irish but Damn you autocorrect