The updated widget design removed the Home mode status.
It would be nice to have that restored.
The smaller font makes it harder to tap on the “Automation” you hope to run.

Why was home mode status removed from the widget? Assuming you had ST auto arm when away as many do, this was the single easiest way to confirm at a glance if your system was armed or not… now this is gone.

I never go to the things tab on purpose … I really want to hide that thing and live day to day from the rooms tab.

Frankly, SmartThings messed up when they forced their efforts for a clean GUI on us. Personally, with well over 100 devices, I dislike always being taken to the bottom to add new things. Ideally, user GUI preferences like these should be available via some sort of settings/options tab.

I am still having issues with CORE after having updated. I cant create any pistons. I am getting an “Error saving page” error.

Yeppers … qualifies both of us!

Why was home mode status removed from the widget?

Every one that wants this needs to cantact support!
This is the reply I got…

Thanks for reaching out. The updated widget was released with input from our customers. Many of our users reported that they weren’t making use of the modes display so we opted not to add it to the newest version of the widget. Since we have removed the mode from being displayed in the widget we have received some feedback that some users would like that feature back. I have added you as a customer that would like to see this feature back on our internal feature request. This way our developers know there is additional interest in having this feature back and can devote more resources to do so.

Since the update, my SHM display on Android is completely hosed. Cannot clear alerts at all; the screen is text rather than the GUI from before. iOS still works.

Please confirm you are on the latest version of the SmartThings app. If you haven’t already, please send a note to support@ with the make/model of your Android phone and we will work to reproduce and get you resolved.

My personal phone is an Android (along with a few others nearby) and I’m not seeing this. I’m a small sample size (and but checking out the back end logs), but I don’t think this is a trending issue. If you contact support, we can work to reproduce and resolve. Thanks for the patience!

I just started seeing this today. Pretty funny history screen as well because I have no cameras. Sending a email to support shortly. Note 3 on android 5.0 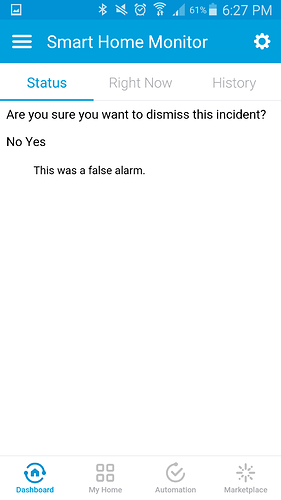 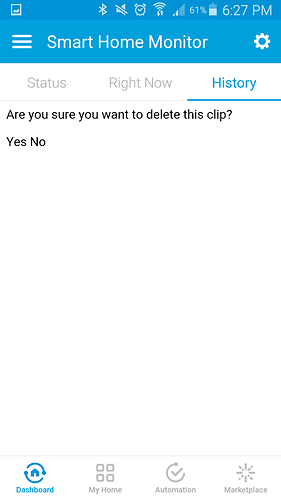 We have people looking into this… If you come across the issue, please contact support so we can compile data to identify trends.

Is anyone else’s app taking forever to open and load, especially when trying to view intrusion alerts? When I say forever In talking 45-90 seconds, so long that I will get a call from monitoring company before I am able to even check camera or presences. Still having issues with core pistons also.

I have completely removed everything and rebuilt everything, happens on 2 different phones and a tablet, the tablet is Samsung S2 completely dedicated to ST so lack of resources/speed is not the issue.

Anyone with input on this would be much appreciated.

This topic was automatically closed 3 days after the last reply. New replies are no longer allowed.