Amazon sent me this obviously used, previously painted, missing screws, oil spot on faceplate, and neutral wire cut in half (but not surprisingly unused ground wire), WD500Z-1 wall dimmer. I have never had this issue with FBA items. Before I order another one from them and return this one, anyone else experienced this issue?

Definitely not, and I buy a lot of stuff from them. Was it actually sold by Amazon or by one of the third-party vendors that list with them? As long as it was fulfilled by Amazon, you should be able to just return it.

As I think back I did once buy something from their warehouse deals which was obviously somebody else’s return and didn’t have all the parts, and they just asked me if I wanted a refund or replacement.

Fullfilled by Amazon, which is why I was surprised. I’ll definitely return it once the shipping status changes (still says preparing for shipment on Amazon). 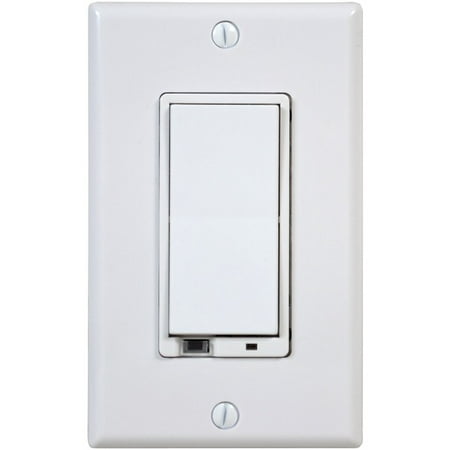 That’s where I put that dimmer, j/k…

I buy both new and used stuff from Amazon never had this issue. Good news from you, Amazon will be happy to take this back and replace it all in one transaction. Super easy.

You can get the GE Z-Wave dimmer from Amazon for $5 less, and it’s a much better product.

You can get the GE Z-Wave dimmer from Amazon for $5 less, and it’s a much better product.

It may be better in some ways, but it definitely has a higher failure rate after it comes out of the warranty period. All the GE switches do.

Also, if intended for a three-way set up, the GE switches require a physical traveler wire, which some people will prefer and others will not.

Actually I installed my first GE 12724 dimmer last night in my kitchen and I didn’t like the way it switches to a level instantly when using voice control. The WD500Z would gracefully fade to a level. I tried the Enhanced Dimmer Control with no luck in controlling the fade time with the GE. I ended up switching it out with my Patio light. Plus I feel like the GE takes longer to install and takes up more space because you have to screw in each wire.

It may be better in some ways, but it definitely has a higher failure rate after it comes out of the warranty period. All the GE switches do.

That’s interesting. I’ve got 6 GE switches, with 2 of them being out of warranty. All work perfectly. The 2 Linears I bought both had to be returned immediately after installation because neither of them worked at all.

And screwing the existing wires into the GE switches works MUCH better in a crowded box than adding even more wires…like the ones on the Linear switches…and wire nuts into the mix.

FBA is sometimes misunderstood but it’s still you buying stuff from somebody and not necessarily from a company.

Amazon sellers just basically send their stuff in and Amazon acts as an intermediary. I know people that would just scan a book ISBN and drop a bunch in a box and ship it to Amazon for resale.

I’ve gotten AWS things tagged as " damaged box" that have obviously been previously used and returned, missing pieces, I’ve gotten FBA things that were in fact NOT FBA, but shipped directly from the seller.
A quick chat with Amazon CS will undoubtedly end up with this being fixed. At least it always has for me. They refunded the full price sale price for a set of Gardenspots ( told me to keep them ) because the screws were missing and it was obviously previously installed