This is the lowest price the starter kit has been except for the Indiegogo backers.

It’s one Prota bridge, three of the push microbots, and 3 packs of sugru.

The bridge has an IFTTT channel, so you can get SmartThings integration that way.

Its purpose is to retrofit automation to existing devices and appliances that require a physical button push.

Obviously it’s expensive, and kind of weird, but there will be some use cases where this is a good solution.

I haven’t tried it yet, but I’m pretty sure my family is getting me the starter kit for Christmas, so I should have a report in a couple of weeks.

One idea that comes to mind for me, depending on how the sugru would hold up, is using this on a newer digital Crock Pot.
We all know you can use just a smart plug on an old dial style Crock Pot. The newer digital ones require a button push (mine required you to push the same button multiple times to get to different cooking temps and times).

This would even work for a Playstation 4 since you can’t turn it on using Harmony.

Assuming I get the one I think I am (three microbots) I will probably use mine on the open door button on the microwave (it’s really hard for me to push), On a window air conditioner which is digital but but doesn’t currently work with echo, so I would just use it for on/off, and on an old dual deck VCR/DVD which requires a button push to switch from one to the other, although then everything else works with harmony. But I haven’t decided for sure yet.

Im thinking it is a much simpler alternative to hacking open my Keurig Coffee Maker . My Keurig has a touch screen with the Power button in the lower left hand corner. That button powers the unit on and preheats it. Then there is a physical button in the center to press to brew so Im not sure I want two of these Microbots mounted to the outside of the Keurig. One I can deal with aesthetically, but two is over the top.

Still its an expensive solution for button press. I may go with a Smarthings Shield for Arduino and then build a button presser.

The SmartThings ThingShield is no longer being made. But there are some alternatives such as the ESP8266.

Yes, I am really looking into ST_Anything and ESP8266. My idea is to get a common ground between devices and the ESP, then just simulate a button press.

Hello @JDRoberts. Would you know if I can program “press or push AND hold” with IFTTT on the Microbot.
I saw a video on Youtube which shows that the phone app supports press and hold but was wondering if this can be done programatically through IFTTT or other means.

Hello @JDRoberts. Would you know if I can program “press or push AND hold” with IFTTT on the Microbot.
I saw a video on Youtube which shows that the phone app supports press and hold but was wondering if this can be done programatically through IFTTT or other means.

They call that “press” instead of “push.” Press has a specified duration.

With the Gen 2 models out now, you can get the Gen 1 Starter kits for $149 but if you don’t mind red color, you can get that for as low as $101.75 The Prota S hub alone sells for $90 separately so maybe a price mistake. The reviews don’t look so great but maybe @JDRoberts can chime in on their reliability? 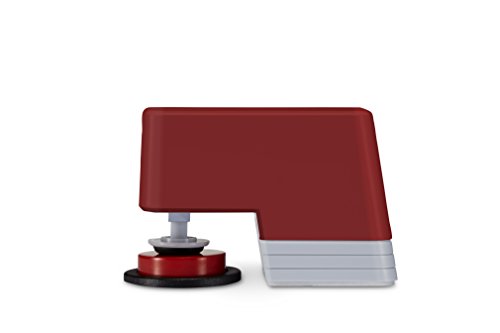 Starter Kit for MicroBot Push MicroBot Push is the wireless robotic button pusher that makes your old appliances smart by being remotely controlable. This starter kit consists of 3 MicroBot Pushes, 1 ...

I have the GEN one and use them all the time. They solve some problems for me that could not be solved otherwise except with some very expensive rewiring that would also void the warranty on the original nonnetworked devices. So I’m quite happy with them.

That said, at this point I would only buy the Gen two just because they have a lot of improvements over the GEN one.

Other things to note: the original Amazon reviews of GEN one were horrible because the software was horrible. Just getting everything set up and running the first time was a huge challenge. However, they fixed that right around the beginning of 2017, and after that the reviews got much better.

The other issue that caused people to give it a one star review was that when they originally started shipping them to the US, it didn’t come with a US plug. It does have a USB connection, but it requires a 2.5A transformer and people either had to buy an extra one or search around for it. The company then realize their mistake and you could buy the correct transformer for one dollar once they identified you as one of the affected customers, but then you had to wait a couple weeks for it to be shipped from South Korea. Many people were understandably very annoyed by that whole process. But once you got the right power accessory, it worked fine.

As for the GEN one devices themselves, I originally got a set of three microbots and the prota bridge. One of the Microbots was defective. Customer service had me make a video of the problem, and then immediately approved sending me a replacement, and that one worked fine.

So I’ve now had mine for almost a year, use them almost every day, and I’m planning to buy a set of the Gen two to try them but haven’t done so yet.

Still, mine are pretty low use. Using them once a day means literally one actuation of the microbot. Based on the description of the improvements to the gen two, It looks like some of the GEN one wore out physically After about 2,000 uses if they were in a high resistance use case.

MicroBot’s gears are now stronger and quieter while lasting longer. Its internal structure have been redesigned to fully realize all useful features including touchscreens support and a more stable wireless connectivity.

Now as to connectivity…The device is Bluetooth to the bridge and then Wi-Fi to the Internet. There are some reviews complaining about the connectivity between the microbot in the bridge. I personally haven’t had any issues, but I made some decisions about placement when I set it up in order to reduce Wi-Fi interference. My guess would be that those who had problems also have boosted Wi-Fi. That’s something you would just have to try and see.

If you buy it, it will either be sold from Amazon directly Or fulfilled by Amazon and their usual customer service policy should apply. So I’m confused about the person who said they couldn’t get a replacement. They must’ve bought from a third-party seller.

The fact that Amazon is directly stocking the second GEN microbots seems to be a good sign with regard to expected reliability.

All of that said, when I bought this I didn’t expect any individual microbot to last more than 18 months and maybe only 12. So I took that into account in budget planning and I didn’t go crazy and buy a whole bunch of them. But for some specific use cases, they solve a Retrofitting use case much more easily than any of the other options.

So I’m happy with my purchase, but I think this is always going to be a product that has some five star reviews and some one star reviews.

Thanks for the detailed report. The way I see it, the hub alone cost $90 and a pack of Sugru can cost $6 so the Microbot Push buttons are just a couple of bucks each. Yes, yes, I know I’m rationalizing my purchase, but what the hey, anything to satisfy my addiction. Besides, it’s been awhile since I bought anything and I do have at least one use case for this, even if it does cost me over a $100!