Pretty sure this update has messed with my iPhone as presence sensor. Can’t be sure though. May be a coincidence but before the update my presence was fine. Wife’s phone hasn’t updated and we left the house today and only her phone registered as leaving.

well, if you have a homepod mini or apple tv… there is an alternative option to consider… just requires a cheap meross smart plug:
https://community.smartthings.com/t/how-to-use-a-meross-plug-to-use-homekit-presence-to-trigger-st-routines/238549

I dont but I’d be willing to buy if this worked.
Is it local?

I dont but I’d be willing to buy if this worked.
Is it local?

——
So, no, it’s not local. Of course, neither was Life360 or the official smartthings presence.

If you need local, you should look for something based on your phone connecting to your own Wi-Fi. @taustin has one, but it will also require setting up a server device.

Yeah I figured it wasn’t . Worth a try.
What’s the wifi one you’re talking about. Do you have the link to it by any chance?
Thank you.

Thanks mate but I don’t see anything on there that shows how to set up presence detection from my wifi.

I actually run edgebridge to monitor offline status so this would be good to try as I already have edgebridge running.

Thanks mate but I don’t see anything on there that shows how to set up presence detection from my wifi.

I actually run edgebridge to monitor offline status so this would be good to try as I already have edgebridge running.

Start here, then ask any further questions in that thread:

Another update regarding detection of phone connection to your home LAN: I’ve been doing some work with @smartie to provide a package to enable you to have a SmartThings presence device based on phone detection results. Although it’s not perfect, some may find it a workable solution, as @smartie has. Please refer to my github repository for more information:

As @JDRoberts mentioned, it uses edgebridge. See the SmartThings Integration section in the README at the github link above.

Let me know if you have any questions.

To answer that, it helps to understand how this app works…

So back to your question, it all depends on your phone’s connection to the network. If your iPhone is updating, it probably will disconnect from the network for some period and this may get reflected in your SmartThings presence device. It depends on for how long your phone is offline and if its entry gets dropped from the ARP table.

If you reboot your wifi router, then it depends on how quickly your computer O/S sees that and removes wifi entries from its ARP table. If the devices pretty quickly are reconnected, it’s possible they may never drop from the ARP table.

Sorry for the long explanation.

I use these routines for each phone for presence.They are Not local.

Thanks. I may have to go down something similar as I’m having issues with my iPhones presence after this new iOS update.

Having said that, I’ll still have issues because I still need my phones presence to be functioning correctly

I think I’ve made things worse.
I’ve deleted my phone within ST in a hope to get it working but how do I add it again?

Menu > Settings > Get location for this iPhone

Yeah tried that but I suspect this is my older phone from a while back. That’s not the name of my iPhone.

I’ve toggled this on and off and the little presence icon isn’t anywhere to be seen.
Very confused here.

Login to IDE while you can and see f you can remove any older phone presence sensors there. Or ST API Browser is another option.

Yeah just did that. I think this might be the correct phone but I no longer see my presence device within the ST app. Did we ever see that? Maybe the ones I seen previous were the life 360 ones? Confused.

When a device is chosen for presence through the official features (and it is the device which was running the app where you made the selection), there’s no longer any indicator in the app itself, which is actually pretty annoying.

The only thing that happens is that it shows up as an option for “member location“ when you create a routine. 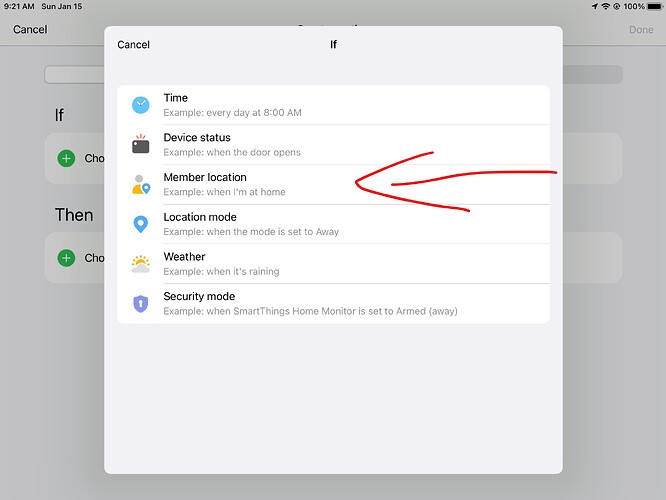 If you had something which showed up in the app itself, it may be that that was part of the old groovy infrastructure and is no longer available and that’s what you have to replace.

Unless there’s something special available on certain phone models that I’m not aware of.

Yeah it just have been the life 360 smart app that created 2 presence icons for me and my wife.

Yeah it just have been the life 360 smart app that created 2 presence icons for me and my wife.

Yeah I’m not too fussed about having the icons back.
My iPhone presence isn’t currently working for now ever since this new iOS update.
I’ve correctly created the correct routines but they are not triggering when I leave now.