I guess the ice caps may be melting but Hell must have frozen over.

Hahaha lol… maybe a release will be near. Another 2-3 years perhaps?

Either this was an error opening it up or they haven’t flipped all the switches yet. Half my devices are incorrect status or messed-up when looking at the details. Some don’t even show appropriate statuses (eg, ‘Connected’ for a leak sensor).

Try to refresh the page. This is the same issue I see with the mobile app also, devices/apps don’t show up as it times out trying to load them. Once the server has refreshed its cache, the second or third try (depending on the server load) eventually shows everything.

Try to refresh the page

doesn’t help for me. i have 4 items showing on the dashboard, hit refresh, then shows 2 devices, hit refresh again, get the 4 devices again. i would expect to see many more of my favorited devices but only get a max of 4

smartapps show in the automation section where I would expect, i don’t know - automations.

i love the time at the bottom right of the screen, UTC time perhaps?

It’s going to have to go through every letter of the Greek alphabet to get to a point where it’s on par with the mobile app, or at least provide decent device state info…

As you’ve noticed, my.smartthings.com is now available to everyone. This is NOT a fully realized product launch but merely an expansion of access. There is no official support available. Also all the earlier caveats still apply:

It probably doesn’t do everything you want. I’m sorry. You can post it here and I’ll see it. I can’t promise to make it do that though.

i would expect to see many more of my favorited devices

i love the time at the bottom right of the screen, UTC time perhaps?

That’s the time until you’re logged out. On the top right (three dot) menu you can change the session length.

You can add more than 20 rooms through browser now

That’s the time until you’re logged out. On the top right (three dot) menu you can change the session length.

@Dianoga first, I would like to thank you for pushing to get this out to everyone. I know it’s been a challenge and you’re off to a great start! I love the ability to manage SmartApps and make quick changes to devices without having to go through the slow mobile app. This is muchhh quicker and a great complement to the mobile app. I think the two together will make for a much better experience overall.

One quick note, when I toggle the session to Keep me logged in, it toggles off automatically almost instantly.

I am able to access the Web Portal now too, thanks.

It’s definitely Beta since there’s no way too reorganize the Dashboard or skin it with different backgrounds.

And, I’d say that this Beta version of the Web Postal is also very confusing since it is showing SmartApps with the header label of Automations. And Automations aren’t even shown anywhere that I can see.

I like it, seems to be working good for me as is.

I speak Greek, i can help you out

very confusing since it is showing SmartApps with the header label of Automations.

ST have a long tradition of using two terms for the same thing and the same term for two or more different things, ‘state’ being an ongoing irritation and in the Developer Workspace and docs slight variations on the term ‘SmartApp’ used to be used in about eight different ways. Automations has been in use as an umbrella term for apps, scenes etc for at least as long, if not longer, than it has for the ‘Automations’ in the apps and I believe that usage still exists in various places in the API (and it is certainly used in Smart Lighting). Understandably so as it reflects the general usage.

Using Automations in the way it is in the web portal is certainly confusing but it shouldn’t be. It is calling the simple rules offered in the mobile apps ‘Automations’ that is the real problem. 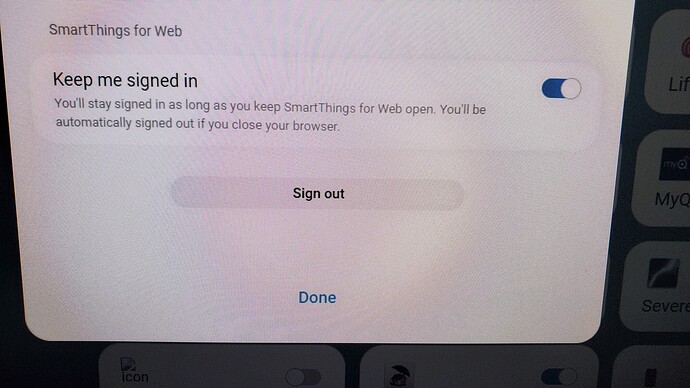 16196210104034727237053799920242016×1134 979 KB
However i think that if you are loged in on another browser than this switch goes back to off. I was testing this on my cell where i have enabled Keep me signed in, but when i signed in on tablet at the same time, feature was disabling itself.
Otherwise web portal looks good, and i also like speed of editing automations. It is much faster than app.
This web portal should stay, and i can see it as one of the native options for tablet dashboard, besides ActionTiles, and SharpTools.
1 Like
johnconstantelo April 28, 2021, 4:09pm #193

I can’t find any option for changing the language of the web interface. Is this possible? If it’s not, can it be added?

I live in Korea, but normally use SmartThings in English.

No idea why they’re different or what determines which language is shown.

Like this setup. Just a couple things. Organizing the dashboard with the ability to choose rooms to be shown like in the app. Also resizing the boxes as they are pretty large. This causes lots of scrolling up and down.