I recently took a look at the Iris stuff before realizing it was on its way out.

One thing I did like about this system was the keypad which I assume could be used as an alarm activation/deactivation system. Iris - keypad link 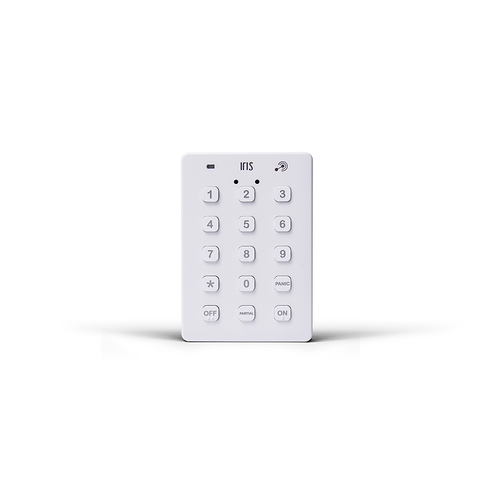 Does this work with Smarthings and if so, can it be used in this way? Ideally, I’d like to be able to walk in as the system counts down (no idea how to do this, if even possible), and enter a code within say 30 seconds before the alarm sounds and notifications are sent etc.

There is much discussion on this in the forums.

Basically this is two different topics.

One) a physical keypad. There are two different Iris keypad models. One of them does work with smartthings and one of them does not. You will find detailed discussion of the one that does in the following thread:

However, you can work around that with core or some other options. Core is probably the easiest at this time. If you ask in the peer assistance thread, The people there will be able to tell you what’s possible.

Thanks JD. I like the idea of the one that does work, but with no countdown it kinda defeats the purpose.

Thinking about it, I have a Schlage Connect door lock I know is compatible with ST even though I’ve not installed it yet. Is it possible that entering the right code could set the system to deactivated/home and not notify and sound?

Infact, thinking about it what would be even better for the system to be disarmed would be the right code entered into the Schlage deadlock AND either a presence tag or the Android app acting as a presence tag. Is this possible?

Yes, it’s all possible, but once you get into the A and B and C kind of logic you may need to use core.

It sounds like at this point you might benefit from looking at the quick browse lists in the community – created wiki. They’re divided into three sections: smart apps, device type handlers, and project reports. There is a list for “security” in each of those three categories. You should find a lot of ideas there.

That specific keypad shown in the photo (Model 3405-L) will work with SmartThings, using the DTH and SmartApps on the release thread @JDRoberts linked. Lowes also had (They don’t sell it anymore, I think) an older keypad that was wider, and had a very prominent speaker on the face, which does not work (Uses a Iris proprietary protocol). The XFinity Centralite keypad (Model 3400-X) also works, using the same DTH and SmartApps.

Also in that release thread, there’s a modified version of SmartAlarm that provides entry and exit delays for the countdown, just as you described it. It does require using SmartAlarm instead of Smart Home Monitor as your “alarm provider”, which sacrifices a bit of app integration (Alarm state no longer tied to that nice dashboard), but it provides some significant functionality to make it much closer to a “normal” alarm panel, including most of all, entry delay (With beeping alerts at the keypad to remind you to disarm the system).

Thanks guys, that’s all really useful.

Not sure of the difference between Smart Alarm and Smart Home Monitor? Both are Android apps I assume? I’m totally new to this game. Last alarm system I had was a standard hardwired PIR system that I had installed professionally, and I’ve tinkered with a Raspberry Pi a bit but I’m no programmer!

Also, the alarmdecoder thing, typically just used as an add-on to a tradtional alarm keypad?

Smart Home Monitor is the official SmartThings feature for security notifications. It’s built into the mobile app. It can do some things that none of the other options can, in particular, it can be integrated with the subscription scout monitoring service. It’s also the only way to be able to view video clips inside the smartthings mobile app.

SmartThings Home Monitor in the SmartThings app harnesses your smart devices for customizable home security and monitoring, giving you peace of mind and keeping your home safe and sound. Read below...

SmartAlarm pre-dated SHM, and was created by a community member and then officially published by SmartThings. It actually has a lot of features that SHM does not, in particular entrance/exit delays and zones. But it can’t integrate with Scout. It has remained popular with the community because of these additional features. 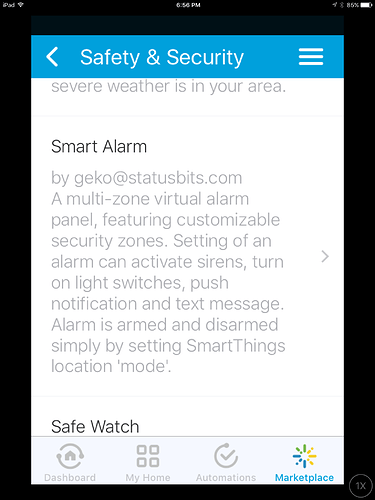 You can install either of these by doing the following:

Three) tap “smart apps” at the top right of the screen

Four) scroll down to “safety & security” and choose that

This will display a list of available security – related smart apps. The first one will be SHM. If you scroll down a little further you will see smartalarm.

I’ve been out of the loop for a while - is this still the best Smartapp to use with this Iris keypad?

I’m trying to get it working with the Smart Alarm smartapp as suggested, but I can’t seem to do two things - successfully set a key to press or hold to arm the alarm in either state, or to be able to set a PIN to disarm. The only PIN reference is to block API access?

With the Enhanced ZigBee Keypad DTH you can get the Iris v2 (and v3) keypads to chime, activate the build in Siren and also arm/disarm SHM (amongst other things). You can check out this post:

RBoy Apps is now a SmartThings partner for Centralite Enhanced ZigBee Keypad Lock - Version 01.07.00 Added support for activating Siren/Alarm in IRIS v2 (3405-L) keypad After updating the DTH, tap the Refresh tile on the ST Classic app device page to display the new Alarm tile. The Iris v2 (3405-L) has a built in 60dB siren The Iris v3 (iL02_1) has a built in 85dB siren Both keypad siren can be activated when using the Panic button and also independently using the Alarm tile (from the Classic app). The Siren can also be activated through SHM or an app like Intruder Alert with Actions [image] [image] NOTE: The built in siren feature is separate from the built in beeping feature. The beeping feature can be used as a Chime. The number of rings in a Chime is adjustable and can be def…

and this app for chiming: